CNBC is reporting that Yahoo will hold a "product-related" news event this Monday in New York City. None other than CEO Marissa Mayer will be speaking at the event. Exactly what Yahoo plans to announce hasn't yet been disclosed, but news of the event comes in the midst of rumors pointing to an acquisition of Tumblr. The extraordinarily popular microblogging site is based out of Manhattan, so the location would make sense if a deal has indeed been finalized.

Reports indicate that Yahoo could spend up to $1 billion for Tumblr, which would represent Mayer's biggest spend yet after high profile acquisitions of Summly and Astrid. The company has also recently signed exclusive content partnerships that will bring it video programming from Saturday Night Live, World Wrestling Entertainment, and others.

Update: Yahoo has made the event official, providing The Verge with an invitation that reads, "Join us as we share something special." Clearly the company isn't being shy about hyping its coming announcement. We'll be bringing you all the news as it happens Monday starting at 5PM EST.

Update 2: Despite the rumors, Bloomberg reports that Marissa Mayer will be announcing an update to Flickr, a previous acquisition, at the event. That could mean nothing else is in the works... or that another announcement is also planned. 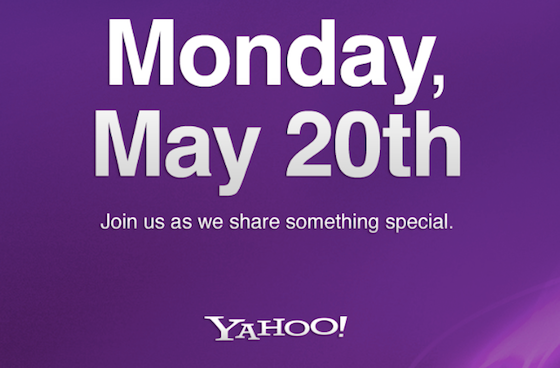