NASA's Curiosity rover has stolen much of the spotlight on Mars lately with its discoveries of once-watery environments and strange, door-handle shaped rocks. But this week, NASA's older rover Opportunity drove into the history books, becoming the furthest NASA object to travel on the surface of another body in the solar system. Opportunity's total 22.22 miles driven on Mars since landing there January 2004 is still short of the all-time record for interplanetary driving, the 23 miles that the Soviet Union's Lunokhod 2 rover drove over the surface of the Moon in 1973. But Opportunity's long journey beats NASA's previous record, the 22.21 miles that NASA astronauts traveled in the Apollo 17 lunar rover in 1972. 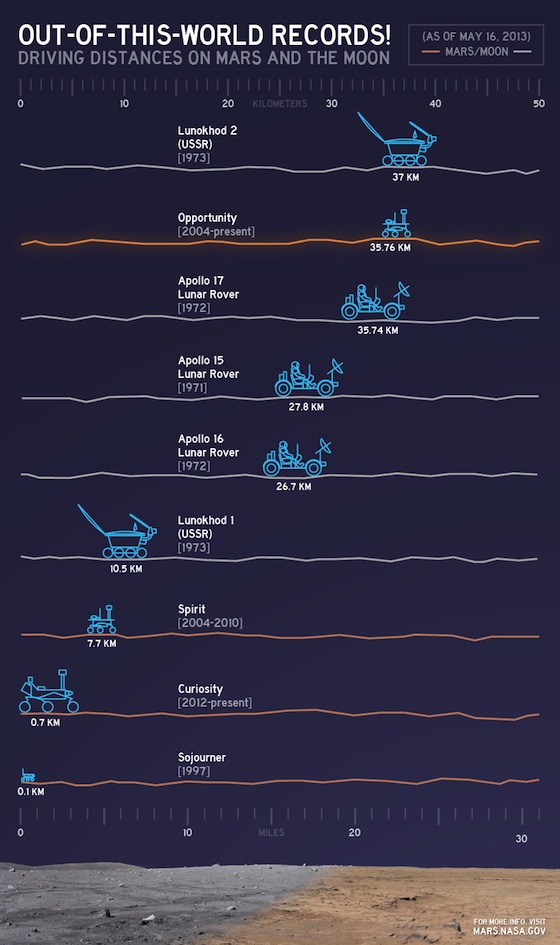 To commemorate the occasion, NASA released an interplanetary drive distances chart this week, seen above. Opportunity is still going strong after almost ten years of operations on the Red Planet, 36 times longer than its original mission lifetime, despite getting suck several times and accumulating massive quantities of dust on its solar panels. In fact, Opportunity is likely to break the old Soviet lunar record for furthest drive off Earth later this year, as NASA already has another trip planned for the rover, 1.4 miles away from its present location in a Martian crater. That journey is likely to take some time though — as the rover, like all of its fellow interplanetary robotic siblings, travels fairly slowly. Scientists are hopeful Opportunity can make it all the way there by February 2014, before Martian winter sets in. And you thought your family road trips were arduous.