Google TV: silent but not forgotten at I/O 2013

Google TV: silent but not forgotten at I/O 2013

Android is coming to our TVs, but has Google already lost the battle for the living room?

It's easy to miss the Google TV booth here at I/O 2013, hidden in the corner of the third floor. That may not be an accident: there was apparently no room in the company's sprawling three-and-a-half-hour keynote to mention Google TV, either, just a short blog post hours later announcing that it now runs the latest version of Android. So in a sea of new products, services, and pitches to developers, we couldn't help but wonder: is TV dead? Google has killed plenty of products with many more fans than Google TV — will it go the way of Reader?

Google TV is Android, and Android is Google TV

We've been told that Google TV isn't going away — the company can't give up, because the market and opportunity are too large. But Google's changing its approach to your living room, beginning with the update this week. Google TV is now based on Android 4.2.2, the latest version of the operating system, and offers developers much more — when Google TV first started three years ago, the team forked Android to build the OS, and a source described this update as "bending the fork back in." Google TV is Android, and Android is Google TV — or it will be, whenever the update becomes available. It’s what Google TV should have been from day one.

In fact, for better or for worse your television is now just another screen size in Google's eyes. Google TV was originally forked because the Android team was so focused on smaller screens, but as the OS developed it became more amenable to larger screen sizes, both on phones and tablets. Now Google is betting that your 4-inch phone and 10-inch tablet aren't so different from your 60-inch TV.

Google's keynote this year focused on optimizing apps for tablets, and a tablet-specific section of the Play store; next year building apps for your TV may be the focus. But tablets may not be just another screen size, and TVs certainly aren't: turning touch-enabled apps designed to be used in the palm of your hand into something that works on a six-foot screen ten feet away, controlled by your button-filled remote control, is no small task. But Google would rather you just think of it as the same old Android. 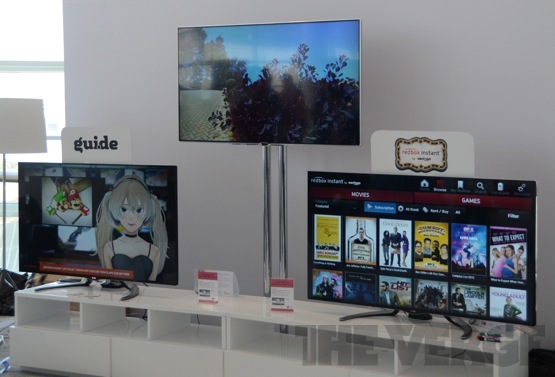 In fact, Google appears even wary of using the term "Google TV" — the team's session at I/O was called "Android: As Seen on TV!" Google Fiber, Google’s ambitious attempt to take over your whole house, doesn’t even use Google TV. It's no wonder, either: Google TV has plenty of product issues, but it has much bigger branding issues.

Google made two key missteps when it originally unveiled the product: bringing a "launch and iterate" process to a market where change is slow and cumbersome, and not explaining how niche the audience for Google TV was. It's a complicated, often difficult setup, but it's powerful — and only those willing to deal with difficult and complicated need apply. Apple's repeated mention of Apple TV as a "hobby" was smart, they said, because it freed Apple from having to answer for slow progress and relative lack of attention. It's just a hobby, what can you expect?

As it tries to take over your living room, Google's not only fighting its bad reputation among users, but among content providers: companies from Hulu to NBC panicked when Google TV first launched, and blocked it from accessing their content. Coupled with the fact that Google TV’s target audience is disproportionately likely to be cord-cutters anyway, that lack of content kills Google TV's primary appeal — Prime Time, the universal guide that searches your cable box, Netflix, and much more. We’re told those deals are coming together now, and that Google TV may have just been originally ahead of its time, but it's a long and steep road ahead. Still, Google believes it has accomplished a lot in three years – a relatively short period in the molasses-slow world of TV — and says that the partnerships it's made with manufacturers and content providers have benefitted both Google TV and the company's other products.

Without the content, what does Google TV really offer?

If the hundreds of millions of device sales and the 6,000-plus developers here at I/O are any indication, Android is a vibrant and thriving ecosystem, the world’s most popular mobile OS. Whether it's the right one for TVs is another question entirely, though — we've seen companies like Ouya take the Android interface and adapt it for the big screen, but it's a massive undertaking. And while Android apps may now run on your television, most won't work as they should: not only do developers now need to code for enormous screens that sit far away from you, they have to figure out how to make an app that works equally well with your fingers and a remote control. No one's done that yet, including Google.

Despite its slightly awkward presence, like the nerdy kid that snuck into the school dance and hid in the corner hoping no one would notice, Google TV isn't gone. And Google believes it may be heading toward a comeback: we’re told to expect a steady drumbeat of Google TV products, from partners like LG, TCL, and others. But a steady drumbeat is what got Google TV where it is today.

What Google TV needs is a makeover, and a splashy re-launch. It needs to shows us why it’s different now, why it’s better. Google needs to convince users, developers, and manufacturers that the Android they love on cell phones can work on the big screen in their living room as well. Then Google needs to prove it, fast.

More from this stream Google I/O 2013: everything you need to know