Lenovo IdeaPad Yoga 11 review: a netbook by another name

A few years ago, netbooks were small, light, inexpensive, often underpowered computers — and the word quickly became a pejorative term, to be used only with the greatest of disdain as you throw your netbook out the window. Then came ultrabooks — small, light, inexpensive, often underpowered computers that have taken the PC market by storm. The more things change, the more they stay the same. So while Lenovo may call its new IdeaPad Yoga 11 an ultrabook, make no mistake: it's a netbook. This is a bag-sized, two-pound, $599 laptop that runs low-end software on low-end hardware. It does have a handy touchscreen, plus an ultrapliable hinge that turns the laptop into a tablet and a bunch of other things besides, but it's a netbook.

Microsoft may finally have a case to make for the netbook, though. Windows RT runs well on almost any hardware — unlike Windows 7, which crumbled on anything low-end — and between the Windows Store and the latest version of Office there's a burgeoning app ecosystem as well. The Yoga 11 could essentially be a Chromebook with an app store — long battery life, does the basics well, great browser, native apps for all the things you want – and for anyone other than the most powerful of power users that's kind of the dream. I've been waiting for it for a while now.

11.6-inch laptops are about to have their heyday. As tablet and laptop converge into one, it seems like this is the only size that makes sense for both uses. At 2.8 pounds and nearly two-thirds of an inch thick, the Yoga 11 is still pretty huge for a tablet and a little small for a laptop, but at least you're not stuck trying to use a 10-inch laptop or a 13-inch tablet.

The massive bezel around the Yoga 11's display and keyboard makes me think the device could be considerably smaller, but in fairness there's no real evidence that's the case; at 11.8 inches it's almost exactly as wide as the 11.6-inch MacBook Air. It's not nearly as elegantly designed as the Air, though: Lenovo took a much more rugged approach, from the leathery black palmrest to the soft-touch metallic exterior. It's comfortable without being particularly sleek. There are few decorations anywhere on the device, save for a Lenovo logo in the corner of the lid — once you peel off the Energy Star sticker on the inside, it's about as minimalist a laptop as you'll find. My review unit is a silvery gray on the outside and all black on the inside, but there's an IdeaPad 310-like orange model that is infinitely more eye-catching. Either way, though, it's a simple and understated device.

Pry open the Yoga 11 and you'll be greeted by its 11.6-inch, 1366 x 768 display. It's a pretty good screen, with solid viewing angles and nice color reproduction, and a blindingly bright maximum setting. It's really nothing special, though, and I continue to look forward to the day that 1366 x 768 displays of any size are a thing of the past. It's okay for a laptop, but when you hold the device close in Tablet mode the relative lack of pixels starts to show. The screen's very responsive to touch and gestures, more so than the 13-inch model — it's a perfectly adequate display, it's just nothing to get particularly excited about. That sums up the Yoga 11's whole aesthetic, actually: good at every turn, almost never exciting or enticing.

On the outside, the Yoga 11 seems more or less like a normal laptop: there's a power button on the front, which is weird, but the two USB 2.0 ports, HDMI jack, and full-size SD card slot are all fairly standard ultrabook fare. So are the two speakers, which blast decent-but-tinny audio out its sides. But the Yoga 11 quickly shows it's something different. 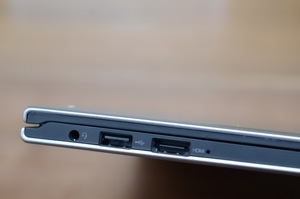 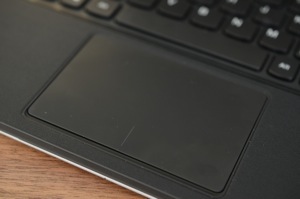 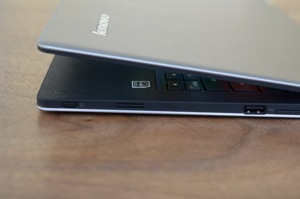 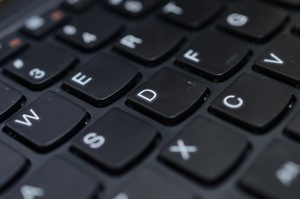 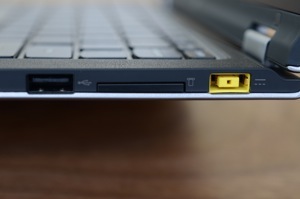 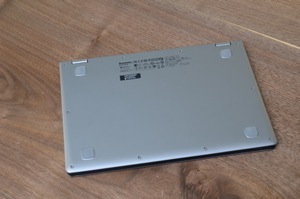 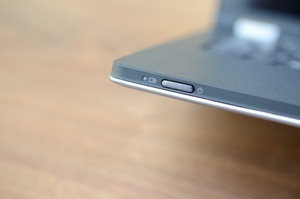 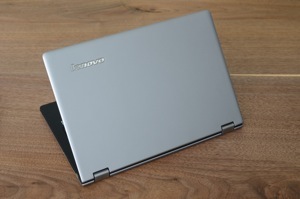 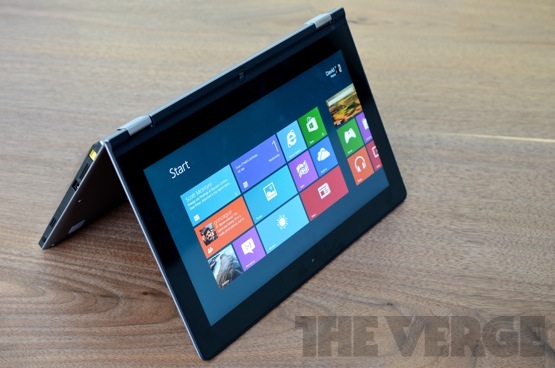 The first clue is that when you open the Yoga 11's lid, it won't stop you from opening it further and further. And further. Like on the Yoga 13, the hinge can rotate a full 360 degrees, and is designed to be used in four entirely different ways. One is like a regular laptop; another is Stand mode, which uses the face-down keyboard as a base and points the screen toward you. There's also Tablet mode, with the screen folded all the way around and the keys underneath your fingers as you wrap them around the device. Lastly, there's Tent mode, which I can't stop calling Teepee mode, where you stand the device up like an upside-down V. (Lenovo's wild, Martin Campbell-directed commercial shows off how the four modes will help you save the world.) The flexibility seems like a gimmick, but it's great — I wound up using Stand mode to watch movies in bed, and Tent mode became my go-to tablet setup because the Yoga 11 is way too heavy to actually hold for very long.

The keyboard and trackpad on the Yoga 11 appear to have been lifted whole-hog from the 13-inch model, and have even been improved in places. The keyboard has the same concave black keys with the curved "smile" design that I've liked on everything from the Yoga 13 to the ThinkPad X1 Carbon, with just the right amount of travel and space — it also still doesn't have a backlight, which frustrates me to no end. Gone is the right-most column of directional buttons (PgUp and the like have been moved to above the arrow keys), which threw the alignment of the keyboard off before; I got used to the Yoga 11 much faster than the Yoga 13, but typed fluidly and fast on both. The trackpad is the same smooth clickpad as on the larger model, and has a few of the same issues with edge gestures and two-finger scrolling, but it's definitely been improved since the 13-inch model came out in November. 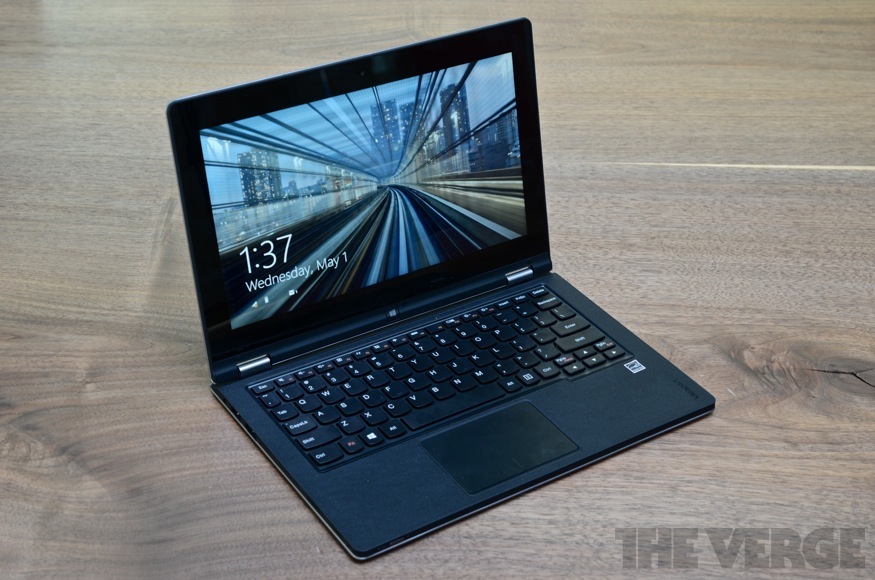 By far the most disappointing thing about the Yoga 11's hardware is the "Powered by Windows RT" sticker that comes on the palmrest. The sticker comes off easily, but you're still stuck using the low-end version of Microsoft's OS that can't run any of your legacy applications. It can only run the apps available in the Windows Store, which is growing but remains a paltry selection next to what you can do with full-blown Windows 8 or OS X. The one distinct advantage of Windows RT is its bundled version of Office Home and Student 2013. Word's the only Office app I use frequently, so I wound up using the Yoga 11 like the world's most advanced typewriter, but there's a pretty compelling case to be made for an ultraportable laptop with a great keyboard and a copies of Excel and PowerPoint.

The case gets even stronger as you enter about hour nine of using the Yoga 11. This device's battery life is just ridiculous: I consistently got more than 12 hours of consecutive, intensive use before the battery gave up the ghost. I streamed YouTube videos for 12 hours, and worked for entire days without ever getting the battery into the red; one nice byproduct of the Yoga 11's limited capabilities is that it kind of feels like it runs forever. It even charges quickly, so with about 30 minutes of being plugged in you'll get at least two full days of use.

That's why I really hope Google's paying attention to the Yoga 11. Lenovo and Microsoft figured out how to squeeze incredible battery life out of these low-powered specs, a feat that has somehow eluded Google and its partners as they've built Chromebooks. If the Yoga 11 were a Chromebook and still lasted this long, I bet it'd be cheaper, and I bet I'd buy one. But I digress.

I'd love to give Lenovo credit for limiting the Yoga 11's functionality and maximizing its performance, but other than the battery life there's nothing "maximum" here. The Yoga 11 is powered by an Nvidia Tegra 3 chipset like the one inside the Surface RT, and it's still not up to its task. Swiping and tapping through the tiles of the Windows UI is fast enough, but almost everything else is head-bangingly laggy. Apps take 10 seconds or more to load, are far too prone to crashing, and just always feel a beat behind. Even Word couldn't keep up, constantly an instant behind me as I typed. The machine felt fast and fresh whenever I booted it up, but by the time I had a couple of apps open it felt downright sluggish.

There are upsides to Windows RT, though. Like the fact that the Yoga 11 boots in only a few seconds, and resumes from sleep basically instantly. It runs cool and quiet, unless you're playing games. From a performance standpoint it's really more like a tablet — quiet, cool, but basic. It works well enough for watching movies (though the lower-res screen hampers that a bit), and when using a tablet it's actually nice to have a bit of extra real estate for drawing or reading — but there's still just so much it can't do, and so much more it can't do well.

One other nice byproduct of Windows RT is that there's no way for manufacturers to put annoying Norton pop-ups or invasive bloatware onto a device. All they can do is add extra apps, which Lenovo does relatively sparingly on the Yoga 11. You get Evernote, OneNote, Ebay, and a couple of others — they're all pretty unintrusive, and are easy to remove anyway. Other than that and the handful of Office apps, you're just getting a clean version of Windows RT. 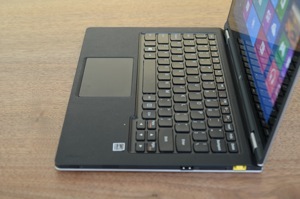 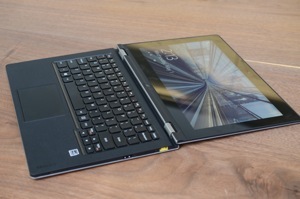 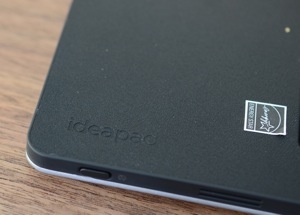 Is $599 the right price for an Office machine?

Netbooks are back, and that might not be such a bad thing. The Yoga 11 is a thin, light, underpowered, relatively inexpensive Windows laptop with a design that's unique without being ridiculous, battery life that is ridiculous in the best way, and built-in access to the Office tools most people rely on. It's absolutely not qualified to be anyone's one and only computer, but as a tool for road trips or business trips it's fairly compelling — as long as your business trips don't involve Quicken or Photoshop or any game more intense than Angry Birds.

Still, I find myself wondering at every turn why Lenovo built this particular device. If the Yoga 11 were a Chromebook, it'd probably offer better performance; if it were running on Intel's Atom chipset, it could run full-blown Windows 8 and may not take much of a battery hit. Lenovo already has the ThinkPad Tablet 2, a Windows 8-powered device that has good battery life, a great keyboard, and a price tag not much higher than the Yoga 11. It also has the Yoga 13, which is a little big for this kind of device, but works better as a laptop and brings a lot more power to this design — if you're into the Yoga idea, get the 13. On the other side of the convertible equation there's the Microsoft Surface RT: it's cheaper, and based on size alone is a better tablet, but it runs into all the same problems as the Yoga 11. Forced to choose I'd probably pick the Surface, though, simply because neither is a very good laptop and the Surface is a better tablet.

All-day battery life is great, but so is more power and more apps — unless you're looking for the world's most overpowered typewriter, you're better off buying something other than the Yoga 11.