Earlier this year, Native Instruments released Traktor DJ for iPad, a powerful DJ system that also has a lower learning curve than most mixing options out there. Now, the company is attemping to bring that experience to the small screen with the dedicated Traktor DJ app for iPhone and iPod touch. It's a $4.99 app, compared to the $19.99 NI is asking for the iPad version, but it doesn't skip on features — in fact, the company says just about every feature from the iPad app is present in this new release. From a hardware perspective, NI recommends that you use either an iPhone 4S or 5 or the most recent iPod touch, but the iPhone 4 and fourth-generation iPod touch are also supported.

For starters, the app features the same waveform-based mixing system as the larger app — we found it to be a rather novel approach to mixing that doesn't rely on the more common "virtual turntable" motif (seen in apps like Algoriddim's Djay). NI says that you can view waveforms from both "decks" even on the smaller iPhone screen, and while the layout provides a nice birds-eye view of everything you have loaded up, it's a bit tricky to manipulate both tracks. However, NI solved this problem — there's a slider that lets you resize each waveform to show more detail, a feature that makes managing the fine details of a track significantly easier. Overall, the interface relies on many gestures that iPhone owners will be familiar with already, like swiping up and from the side, or pinching and zooming on a waveform, traits that make the app easier to manipulate when getting started.

Traktor DJ for iPhone also includes the same powerful syncing features as its bigger-screened sibling — using Dropbox, you can sync different track settings back and forth to Traktor Pro on the desktop, though it isn't clear yet if you can do the same between the iPhone and iPad apps. It's worth noting that if you have iTunes Match enabled on your iPhone, you won't be able to use the Dropbox sync settings. If that's important to you, you'll need to load up music the old-fashioned way. 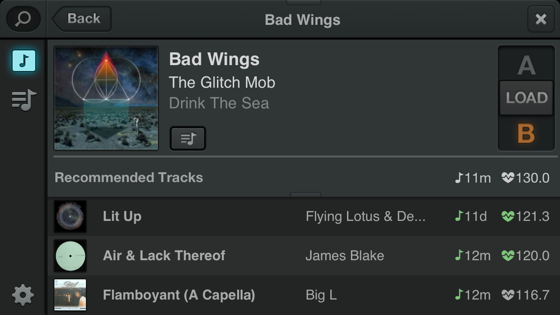 Smaller than the iPad version, but nearly as powerful

Another feature taken straight from the iPad app is the clever "harmonic analysis" tool that finds other songs in your iPhone's library that match up well with what you're playing, a tool sure to be appreciated by first-time DJs. Of course, you'll want to make sure that most of the music you have loaded onto your iPhone would fit together in a mix, otherwise you'll get strange recommendations like pairing Pearl Jam with Rabbit in the Moon (but maybe that's what you're going for).

There's also a nice notification-based help system that guides you through the app's many features as you go. While it's a fairly simple matter to get started with the app, and the notifications are a great way of pointing out the app's many features, there's definitely a bit of a learning curve here — but that's no different than any other mixing software we've ever tried. While you're probably not going to put together a flawless, hour-long mix your first day out, within minutes I was cutting up songs with the sampler and tweaking them to my heart's content. No one else would probably want to hear my compositions, but I was definitely having a good time, and was already getting more skilled with the app after just a few minutes. Given how much fun we had with the iPad version of Traktor DJ, aspiring mixers should definitely take a look at the iPhone app as well.

Our own Trent Wolbe had a chance to try out an early version of Traktor DJ for iPhone back at SXSW — check out the video below for his impressions and some details from Native Instruments on how they put the app together.