Adobe Photoshop, the gold standard in image editing for print and the web, retails for $699. If you’ve ever needed to edit images on OS X only to balk at Adobe’s industry-leading price tag, chances are good that you’ve bumped into Flying Meat’s Acorn, "the image editor for humans," according to creator Gus Mueller. Today, Flying Meat is releasing Acorn 4, the first major update for the product since 2011, and even if you’ve given the $49.99 editor a good look in the past, you’d be well advised to pull up a chair, grab some images, and check out what’s taken Mueller — the sole developer behind Acorn — the past two years to build.

Acorn 4 is faster, and by a lot

First things first: Acorn 4 is faster, and by a lot. Many parts of the app, like the Move tool, feel noticeably snappier than Acorn 3, but the performance of filters in particular feels like a huge step forward. Mueller says that tools like Flood Fill and the Magic Wand also got speed bumps, although the difference wasn’t as noticeable to me. If you’ve been reluctant to try Acorn because you’ve heard it lags behind competitors like Pixelmator, the speed improvements in today’s update definitely make it worth another look. 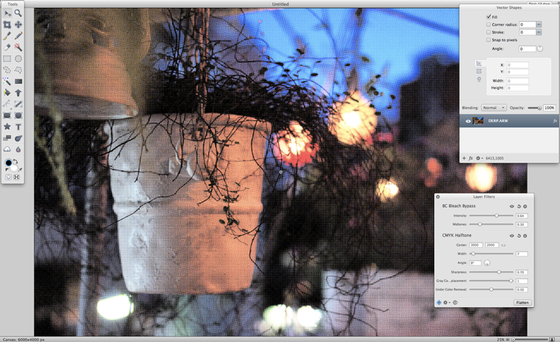 As far as aesthetics go, Acorn 4 is a good-looking app but it isn't trying to break the mold — everything is subdued, but clean and easy to navigate. Over the years, Mueller has focused on making the app feel (and behave — more below) as "Mac-like" as possible, and it shows. If you’ve used Photoshop you’ll be able to find your way around easily, and many of the keyboard shortcuts carry over, but the UI is stripped down to the bone. "I try and target the people who have used iPhoto," says Mueller, giving an indication of the kind of visual simplicity he's aiming for. In the top half of the right-hand panel you get contextual settings for your current tool, and down below, a layers list complete with most of the features a Photoshop user would expect — grouping, layer masks, locking, and blending and opacity controls. If you're coming from Acorn 3, it’s not immediately obvious that anything has changed, but that’s only before you click the "fx" button and see the new Layer Filters palette for the first time. 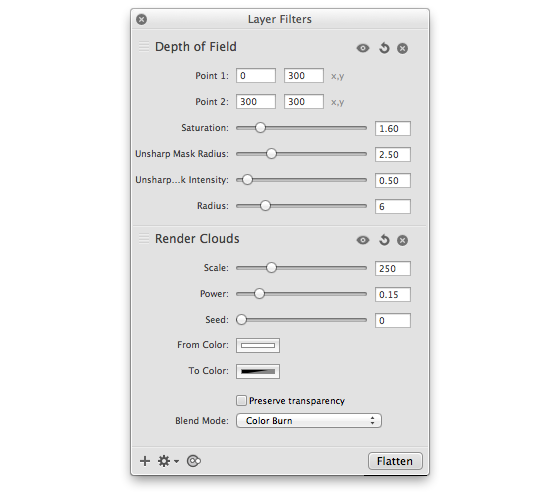 The non-destructive filters can be stacked, reordered, and readjusted

Image editors typically offer a ton of different styles and effects that you can apply to images, but the UI doesn’t usually make them very inviting if you don’t know what you’re doing. For Acorn 4, Flying Meat borrows heavily from Pixelmator with a Spotlight-searchable list of layer filters (it subsumes Acorn 3’s separate lists for filters and layer styles), but it adds a big improvement — the filters are now non-destructive, and can be stacked, reordered, and readjusted after they’ve been applied. Coupled with the speed improvements I mentioned earlier, Acorn 4 lets you see your changes instantly reflected on the canvas, which is immediately rewarding and really encourages experimentation and playing around. On the downside, many of the most useful effects aren’t going to look right unless the user switches the blend mode away from "Normal," which he or she is only going to know to do after a lot of experience with Photoshop or a similar app. Hopefully the documentation for Acorn 4 makes this clear, because it would be a shame for casual users to miss out here. 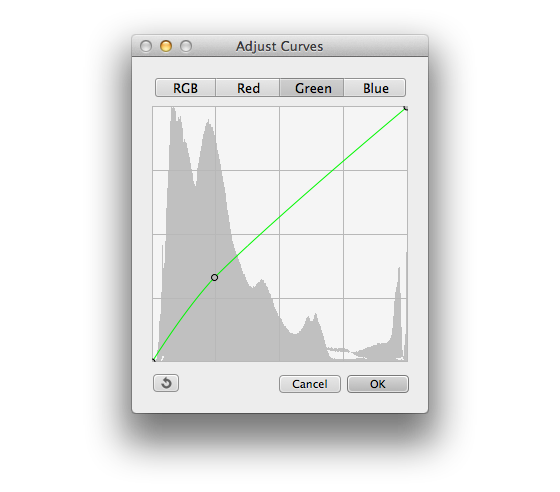 The other big news is vastly-improved control over levels and the long-awaited addition of curves, which Mueller says is his most-requested feature from longtime Photoshop users. If you know how to use curves (lucky you) and not having them has made you think twice about Acorn in the past, know that they’re here, but just like Pixelmator’s implementation, you aren’t able to click on your image to select a starting point — all of your interactions with curves happen off the canvas. This limits the tool's usefulness somewhat compared to Photoshop's, but the addition is still a big step forward. Likewise, the changes to levels are a huge improvement — a new midpoint slider gives you much better control over your image’s midtones (Acorn 3 used the "dumb" CoreImage contrast adjustment), and a live RGB histogram gives you extra visual feedback. (That is, when it works properly — there was a bug in my installation that prevented the live histogram from showing up. EDIT: The bug has since been fixed and will make it into an update shortly.) Just like with layer filters, changes to both levels and curves are reflected in the image on the canvas, and adjustments feel pleasantly snappy here, too. 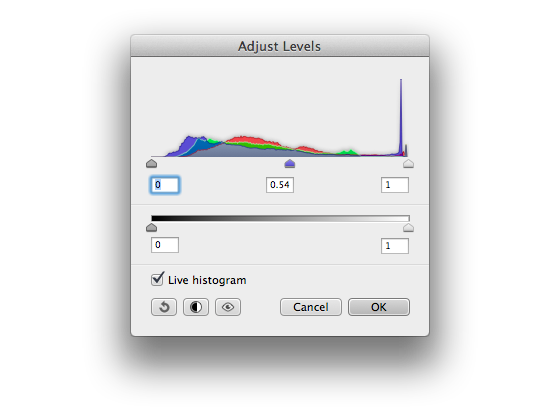 The interface is surprisingly forgiving

So what’s it actually like to work with Acorn compared to Photoshop? Over the years, Flying Meat's app has earned a reputation as a workhorse — an easy-to-use tool for plowing through the most common image editing tasks, and rightfully so. One reason for that is its surprisingly forgiving UI, which lets you copy styled text from your web browser straight onto a layer, or type math formulas like "1020*2/3" in numerical fields, or just drag a bunch of images into the layers list. The app just keeps chugging.

One more feature that pulls Acorn ahead of competitors like Pixelmator and Photoshop Elements, in my opinion, is its support for automation, both through half a dozen basic actions in Automator and an extensive AppleScript library. If you’re new to AppleScript you can also use JSTalk, a variant of Javascript that should be easy to pick up if you’ve done any web programming. There’s even some limited support for Python. If you’re used to scripting things like batch tasks in Photoshop, you’ll be right at home with Acorn, and if not, it’s easy enough to jump in and start saving some time on common tasks with even a little bit of programming experience.

There are a few rough edges

All that said, there are a few rough edges that can be irritating for people coming from other applications. The biggest example is the Clone tool, which doesn’t support brushes or soft edges of any kind. If you want to gently blend your cloned changes into your main image (which you will), you’ll have to add a layer mask, which is cumbersome compared to Photoshop and even lower-priced alternatives like Pixelmator. The tool also has no way to sample all layers, requiring a similarly elaborate workaround. It’s actually a good metaphor for the entire app: things are simple and powerful, but the controls are stripped down to the point where doing some relatively common things requires you to jump through extra hoops, at least compared to the professional competition.

Working for The Verge, one of the most common adjustments I make is to color temperature, for example, to mask out a smartphone screen and make its colors more closely match the other light source in the photo. So, for me anyway, it’s disappointing to see that color temperature doesn't have a built-in control in Acorn 4. Acorn does support Apple Quartz Compositions like the excellent BC Image Correction filter, it’s just too bad that such a common tool hasn’t been incorporated into the new nondestructive layer filters palette.

A glimmer of hope for content-aware fill

I use Lightroom for essentially all of my photo editing, but there’s one reason that I still need to open Photoshop from time to time, and that’s the Content-Aware Fill tool, which lets the app guess how best to fill empty space. It’s great if you need to extend a background by another 100 pixels, or remove a moderately-sized object from the canvas. There’s still nothing comparable in Acorn 4, although Mueller had some encouraging words when I pestered him about it, saying, "There are open source implementations of that and I’ve been meaning to add it but haven’t gotten around to it. That hasn’t been requested that much — probably only 5 times in the past year." Personally, I feel like Acorn users don’t even realize that this is feasible, since Content-Aware Fill was a headline addition to 2010’s Photoshop CS5, but now that the news is out maybe the feature requests will start pouring in.

At $49.99, Acorn 4 is more expensive than the $14.99 Pixelmator 2, but half the price of the $99.99 Photoshop Elements 11, and its breadth of features position it closer to the latter, at least in the ways I use the app. For the month of May, Acorn 4 will be on sale for $29.99 both on the Mac App Store and from Flying Meat directly, which easily puts it ahead of Pixelmator in my mind, but you can always download the free trials and compare for yourself. A direct license from Flying Meat gives you a couple of significant benefits over the App Store version — no sandboxing, which is a precondition for writing scripts that tell Acorn to write to arbitrary folders on disk, and $19.99 upgrade pricing for future versions of Acorn. There’s also no way to transfer your App Store purchase to a standalone license afterward, so think carefully before you buy.

When I asked Mueller what he thinks sets Acorn apart from the competition, he said "I just want Acorn to integrate with the whole system … I want to make it simpler. I want you to feel at home with it." He isn’t trying to compete with Photoshop ("I don’t want to dethrone them, their customers are crazy"), and his app doesn’t have the same level of flair as Pixelmator, but if you work with images for the web, Acorn 4 is a forgiving, fast, powerful tool that will probably get you the results you want, provided you’re willing to work around its occasional idiosyncracies. It might not be optimized for every case, but it hits the sweet spots for most of the people, most of the time, and without breaking a sweat.