Adobe is working on a mobile complement to Lightroom that will let you view and edit the RAW images on your computer from your mobile device. The app, which is still in the early stages of development, uses the lossy DNG Smart Previews new to Lightroom 5 to keep the footprint on your tablet to a minimum, and will use the same image processing model employed in Lightroom and Adobe Camera Raw. The company’s group product manager Tom Hogarty showed an internal test application on a recent appearance of The Grid, an online photography show hosted by Scott Kelby.

During his appearance, Hogarty used an iPad 2 to zoom and scroll inside a large 5D Mark III RAW image, tweaking adjustments to shadows, highlights, and color temperature. While the app looked very primitive, most of the controls you’d expect from a mobile version of Lightroom are already there (pictured below), although things are still very sketchy. Hogarty said that selecting some of the controls would "make the iPad explode." 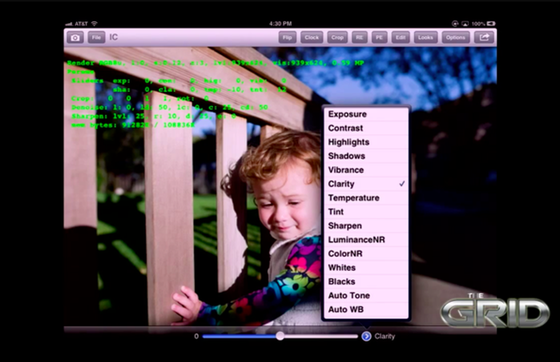 The benefits of this kind of approach would be hugely compelling for photographers. Not only could you store and view representations of your edited RAW images on your mobile device, any edits that you make could be synced back to your home computer just by transferring the few bytes that describe what you changed. As Hogarty points out on the show, Lightroom edit data is stored as parameter values, small pieces of text that would be easy to sync between devices. What he describes sounds like the kind of Dropbox-like syncing approach that many have longed for Adobe to provide between multiple computers, only headed to mobile devices.

As it stands, there isn’t much in the way of RAW-capable apps for mobile platforms, and what few there are don’t share the same processing model that Adobe uses, making them little more than tech demos if Lightroom or Photoshop are the center of your image-editing workflow. But things are still a way off. For starters, Adobe hasn’t figured out whether the new roadmap will be part of Creative Cloud, the $49.99 monthly service that provides access to all of Adobe’s professional applications, and no mention was made of other platforms aside from iOS. "This is just the beginning of the conversation," said Hogarty.