Trying out the 'future' of cinema with a big summer blockbuster

Last week I found myself in the city of Nagoya to catch a screening of Iron Man 3, the latest installment in the Robert Downey Jr. superhero series. But it wasn’t just any screening — it marked the debut of 4DX movies in Japan, with a promise that I’d feel every punch, kick, and explosion myself. Korean company CJ Group is betting on the format to offer something your living room never will: seats that roll and jolt in sync with the action on screen, while water vapor, jets of air, and various aromas are pumped into audience members’ faces.

The only place you can actually catch a screening in Japan so far is the Korona World theater in Nagoya, a central city a little under two hours west of Tokyo by bullet train. Nobody else appears to have invested the $2 million required to kit out a screen with 4DX technology, though Korona World itself has seen better days; there was a guy selling fruit and vegetables out of boxes in the lobby. It’s not the most auspicious place to experience the future of cinema.

Not the most auspicious place to experience the future of cinema

Is Iron Man 3 made any better by 4DX? At times, it actually is. The resolution, for lack of a better word, of the seats’ movement is surprisingly high, and in scenes where Iron Man soars through the air it lends an appreciable level of immersion. I’m no fan of 3D, but Iron Man 3’s conversion is one of the better I’ve seen, and it works well with the sense of movement provided by the chairs. The colored strobe lights on the ceiling are another cool addition; at least from my front-row seat, they added another dimension to explosions right at the periphery of my vision, making me reflexively blink each time.

For the most part, however, 4DX is a gimmick at best and distracting at worst. One of the first 4DX-enabled events sets the tone: a mysterious plant smolders on screen, and you feel a vibration in your back. This is weird and off-putting, and highlights a major limitation of 4DX — its haptic feedback comes from behind, but all the action happens in front of you. While the seats’ motion works well to convey speed on screen, there’s a real disconnect between the on-screen action and the explosions and impacts that keep prodding you from behind. 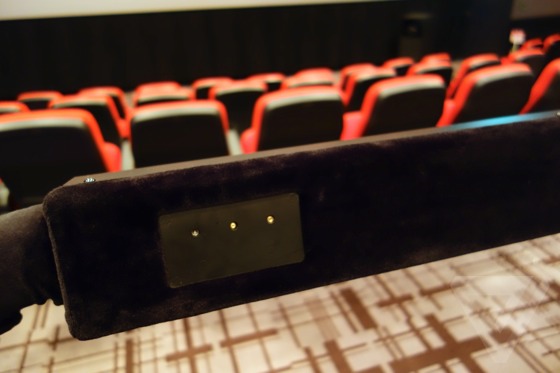 On the other hand, there’s a bar in front of every seat that will blast you in the face with mist at the hint of any onscreen water. This makes sense in certain situations, but often comes off as weedy and inappropriate. Does it really add to the moment to get a faceful when Iron Man falls into the ocean following a helicopter attack? The same could be said for 4DX’s aroma array. Though it’s supposedly capable of over 1,000 different scents, I was only able to distinguish a single one during the entire film, a chemically sweet, metallic odor that seemed to pop up at random. I couldn’t for the life of me work out what it was supposed to signify.

The blasts of air that come from either side of your headrest are, unsurprisingly, hit or miss. It can actually be quite immersive to feel virtual bullets whizz past your face in the middle of a firefight, but the air jets are noisy and sound nothing like guns. The overused effect reduces the soundtrack to a playground Nerf gun battle.

If you’re the kind of person that enjoys the occasional big-screen 3D movie to set the experience apart from what you’d get at home, you’ll probably get a kick out of 4DX. If you go to cinemas to see a film in its most natural and immersive setting, however, 4DX is going to come off to you as little more than a Disneyland ride. The format is novel, for sure, and the parts that work are enough to justify forking out the 1,000 yen (about $10) premium for anyone curious. But it’d take a dumber movie than Iron Man 3 for me not to be annoyed by the distracting intrusions, and if a blockbuster like this isn’t the perfect use case, what is?