Learn to love your gun with 'Receiver'

Learn to love your gun with 'Receiver'

When you shoot a gun in BioShock or Far Cry, you don't have to think much about how that gun works — you press a button to fire, a button to reload, and that's about it. Receiver, on the other hand, is a first person shooter that's almost entirely about mastering your weapon. And it all started with The X-Files. When David Rosen from developer Wolfire Games picked up a replica SIG Sauer P226 as part of a Fox Mulder halloween costume, he says he "had a lot of fun just playing around with the slide and ejecting and inserting the magazine. It seemed crazy that there were so many games about guns, but none that let you actually play around with them and see how they work."

Receiver was originally developed over the course of nine days as part of the "7 Day FPS Challenge," and just this week was released on Steam. In it, you play as a sort of disembodied handgun, infiltrating a virtually empty building in search of 11 different cassette tapes. The only things stopping you are are the drones and automated turrets littered through the hallways, as well as your ability to handle a gun. What makes this so challenging is just how many actions are required. If you're using a revolver, for instance, you'll need to dump out all of your shells in order to reload, and then put in each new bullet individually. Each of these actions requires a different combination of button presses, and you'll need to memorize these sequences to be successful. (This concept could also be ideal for the next generation of Microsoft's Kinect sensor.)

"It's all about muscle memory, not timing."

Thankfully there is a cheat sheet to get you started, which displays all possible actions and highlights the ones you can perform right now. It's essential when you first start playing, and the process of weaning yourself off of it so that you can start doing things by memory alone is very satisfying — it feels really good the first time you reload a Glock without having to think about it. But even then, things don't get much easier. There are three different guns that you'll receive at random, and each behaves slightly differently. And in another nod to realism, Receiver also features permanent death, so one small slipup against a drone will mean starting over from scratch. You'll restart the game in a new place with a potentially new weapon, and the locations of enemies will be shifted around. The result is a game that is very hard — I died often, and have yet to collect each and every cassette hidden throughout the building.

Of course, a video game can only do so much when it comes to imitating how real guns work. The developers spent time studying videos from weapons enthusiasts and even modelled the in-game guns and their parts based on real-world schematics. "We also incorporated feedback from a couple professional gunsmiths who provided very detailed critiques of the gun mechanics in the original build," says Rosen. But as he points out, he's yet to actually fire any of the guns in real life. "Without doing that, it is pretty hard to answer some basic questions about the operations of different weapons," he explains. "What happens if you try to engage the safety on a Colt 1911 A1 while the slide is locked back? What happens if you try to cock the hammer on a S&W Victory Model 10 revolver when the cylinder is not in place? These questions are not possible to answer just with web searches, because the answers are obvious to anyone who owns the gun, and of no interest to anyone who doesn't." 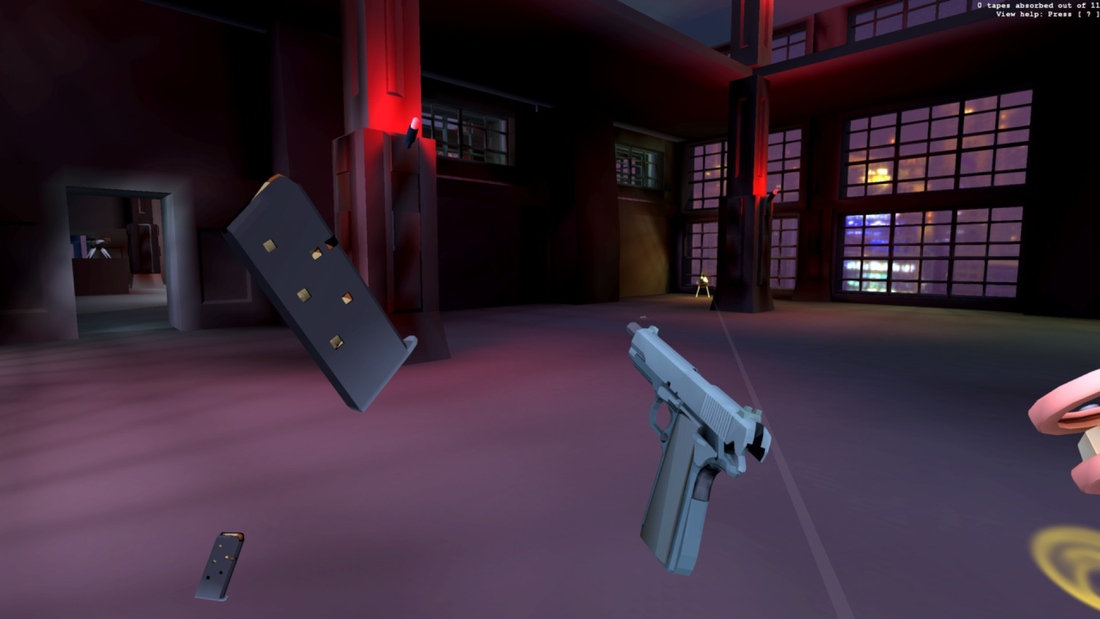 Receiver also feels much less violent than most shooters. Since you're fighting nothing but machines, there's no blood or guilt when you ultimately destroy them, though Wolfire's decision to go with mechanical foes was made for a different reason. "With human enemies, it's always kind of jarring when you can't scare them, or negotiate with them, or interact with them in any other way besides shooting them in the face," Rosen tells The Verge. "With robots, we can give them pretty simple AI without running into the uncanny valley of behavior — it makes sense that they are just running their basic killdrone program."

"They are just running their basic killdrone program."

It may not be exactly like real life, but operating a gun in Receiver is definitely a much more involved process than in most games. Actually shooting enemies is more of a secondary consideration, while the real challenge is mastering the tool you've been given. And it's all wrapped up in a slick package that really makes you feel like a cool, infiltrating spy — but only after you memorize those buttons. "It's all about muscle memory, not timing," says Rosen. "Receiver takes this idea to its logical extreme."