NextGuide Web replaces your DVR interface with your web browser

Share All sharing options for: NextGuide Web replaces your DVR interface with your web browser

As television channel counts have ballooned, there's more programming than ever out there — but the hardest part can actually be finding something decent to watch. NextGuide Web, launching today in a closed beta, tackles that problem directly from your web browser. If the name sounds familiar, it's because NextGuide also exists as an iPad app. The website offers much of the same functionality. On the most basic level it serves as a super-charged programming guide. Users can tell NextGuide who their cable or satellite provider is, and the site will then pull what what shows are available. However, it serves as a universal search not just for broadcast programming but for online sources as well: searching for Mad Men, for example, not only pulls up listings from AMC, but also whether the show is available via Netflix, iTunes, Amazon, or Hulu Plus.

Users can keep track of their favorite shows in a universal watchlist, and NextGuide can also generate reminders — shooting you off an email when a movie or show is about to air or goes live on one of the above-mentioned streaming services. Perhaps most clever of all, it also features DVR integration, letting Comcast and DirecTV subscribers schedule a show to be recorded directly from the NextGuide interface. The site's social integration provides programming suggestions based on the activity of users or your friends on Facebook. 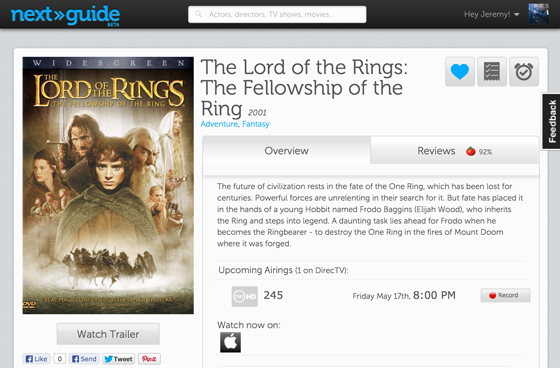 On the surface, one more interface for television seems like the last thing we need — but NextGuide Web intrigues by serving as a one-stop shop that's available whenever you're at a computer. It's far too easy to forget a show that's recommended by a friend or that you read about in passing, but being able to mark it down for watching whenever you're at a web browser fills in those gaps (and integrating it with universal search is a welcome relief from the constant hunt-and-peck of searching separate services).

A one-stop shop in your browser

Users can sign up for NextGuide Web today. The company will be allowing new users into the beta on a weekly basis, but those that are admitted will be granted invitations to share with their friends to speed the process along. Users of the NextGuide iPad app have immediate access, as do users of the Dijit Remote app for iOS and Android. Those that use the Miso social TV app will also be able to log into NextGuide Web directly within the month — though unfortunately, the service is restricted to just the US and Canada for now.