‘Plants vs. Zombies Adventures’ is a Facebook game you’ll actually want to play

‘Plants vs. Zombies Adventures’ is a Facebook game you’ll actually want to play

Plants vs. Zombies Adventures combines a thing you like with a thing you don't: it's a spin-off of Popcap's terrific strategy franchise, but it's also a game that's exclusively available on Facebook. Despite the social network's best efforts, Facebook is still viewed as a home for spammy, sub-par games, not a platform for truly great titles. But games like Adventures could help change that. While it contains many of the same features and a similar structure to other games on Facebook (there's even farming), Adventures still maintains that same addictive gameplay that made the original Plants vs. Zombies such a hit.

If, for some reason, you haven't played PvZ, the basic structure is simple: Zombies come shambling in from one direction, and you'll need to place various kinds of plants to keep them from reaching your home. Some plants are offensive (like a peashooter that literally shoots peas), while others are defensive (like a walnut that serves as a barrier). In order to plant new weapons and defenses, you'll need to collect sunlight, which is generated by — you guessed it — sunflowers. This all remains true in Adventures, though the formula has been tweaked a bit. Instead of just protecting your house, you'll also go out on road trips where you'll need to clear areas of zombies while protecting your RV. This is the core of the game, and it helps keep things fresh by constantly putting you in different locations with different strategic possibilities: zombies will come in from different directions, for example, and sometimes you'll have multiple things to protect.

This time around, the plants are in limited supply

As you progress you'll unlock new plants to add to your arsenal, including some brand new weapons like an asparagus missile. But even though you'll be out on the road, you'll still need to protect your home. Like seemingly every game on Facebook, Adventures gives you a virtual plot of land to customize; you can add buildings that generate cash over time, and set up a nice little farm to grow zombie-destroying plants. In fact, this might just be the biggest change in the game: this time around, the plants are in limited supply. 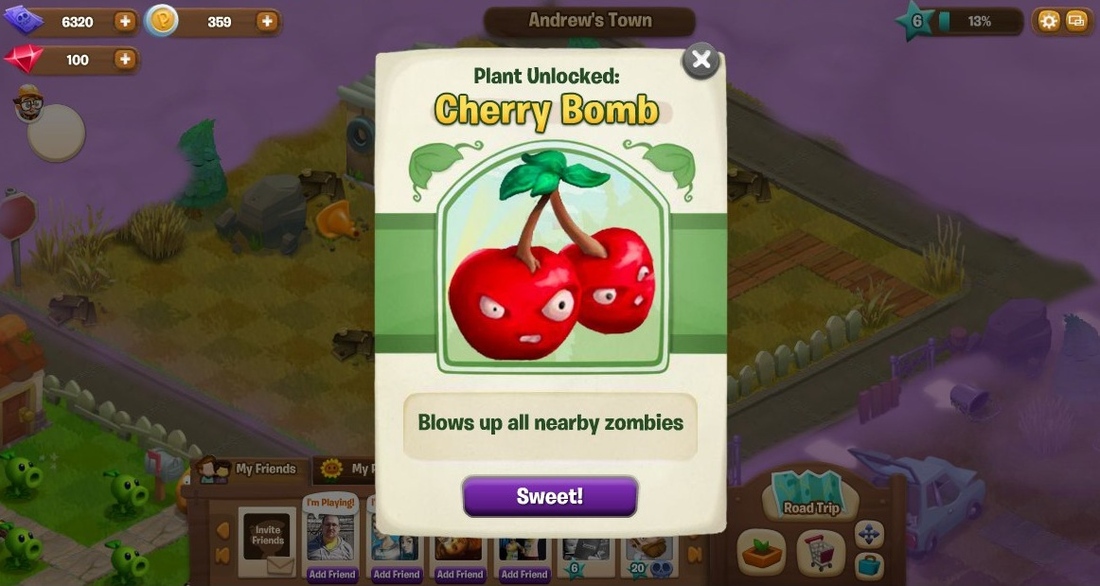 As you use peashooters and walnuts in battle, your stock will deplete, and you'll need to grow more on your farm to replace them. This requires either time (some of the more useful plants can take hours to grow), or if you're impatient, you can spend a few real-world dollars to speed things along. Your little plot of farmland is also susceptible to attacks from the undead; so in addition to growing plants to bring into battle, you can also place them around your home base to fend off the occasional wave of zombies. The wait-to-play structure can be annoying, but it can also be largely avoided by careful planning: If you regularly tend to your farm, you'll likely have a steady supply of plants for when you need them. And thankfully the most basic plants, peashooters and sunflowers, take little time at all to mature.

All of these new elements may make it sound like a very different game, but Adventures still feels very much like Plants vs. Zombies. The gameplay is addictive (though quite a bit easier than in the original) and the sense of humor is pitch perfect. But re-creating that feeling — especially on Facebook — wasn't exactly easy. "Figuring out a core combat that would allow players to defend their towns in interesting ways, while also being a truly fun standalone experience, took a lot of iteration," executive producer Curt Bererton says. "We prototyped 11 different variants of combat: some were very traditional path-based tower defenses where the zombies did not attack the plants, but we felt this lost some of the appeal of the original game."

Of course, there are also some social elements, though thankfully they aren't forced upon you and in some cases they're actually welcome additions. Case in point: the ability to send zombie attacks to your friends' homes. While it's relatively simple at the moment, it's a nice twist on the traditional Facebook gaming formula, which typically involves friends begging for help. It's also a feature that could be fleshed out into something even more interesting in the future. "We've got a lot more ideas of where to take this moving forward," explains creative director Mathilde Pignol.

"We've got a lot more ideas of where to take this."

But even in its current form Adventures is a terrific time waster, and a great way to get a bite-sized PvZ fix. The levels are short enough that you can play even if you only have a few minutes to spare, which means it's also really easy to keep going for "just one more level." And if you don't mind a bit of waiting, you won't even have to spend much, if any, real money. All told, it's a solid adaptation of a great game, and an experience that's worth logging in to Facebook for. "We're happy with how we were able to provide a fresh twist on the PvZ experience while also leaving open a lot of runway for great new features and content," says Bererton. And, at the very least, it should help hold you over until the full sequel launches in July.