This is the new Xbox One controller

This is the new Xbox One controller

Do you feel that?

The newly-designed Xbox One hardware will come with a redesigned controller, Microsoft revealed today at its next-generation Xbox event in Redmond, Washington.

Microsoft says its console gamepad has been "refreshed with more than 40 technical and design innovations," including an updated directional pad, thumb stick, integrated battery compartment, and an "ergonomic fit." That includes new "vibrating impulse triggers" designed to provide feedback to players' fingertips.

Microsoft says the new controller is designed to work closely with the new Kinect, "allowing the two to be paired automatically to create seamless player syncing." That synchronization will be enabled by Wi-Fi Direct technology that pairs the controller with the new system.

The new controller appears similar to the Xbox 360's controller design, and Microsoft has clearly taken an evolutionary design approach based on looks alone. In case you're wondering, Polygon reports that the existing Xbox 360 controllers won't be compatible with the new console.

Click here for our hands-on impressions with Microsoft's new controller. 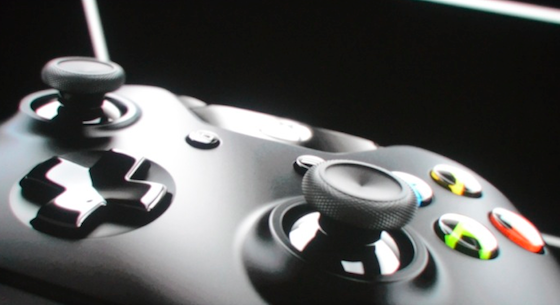