A massive plan is underway to upgrade aging road signs in the US. The goal is to make them more reflective at night, and easier for drivers to see. But the main government instruction manual for doing so, the longtime bible of roadside signage and safety, could soon be chopped in half. Advocates worry the change will cause confusion for drivers and increase the risk of accidents. "The idea of dividing the baby and only keeping the parts that are mandated is, we think, shortsighted," said Henry Jasny, vice president and general counsel for the Advocates for Highway and Auto Safety, a lobbying group made of up of insurance organizations and consumer rights' proponents.

"dividing the baby and only keeping the parts that are mandated."

Jasny told The Verge that his group is concerned about a government proposal, announced in early 2013, to cut the federal Manual on Uniform Traffic Control Devices (MUTCD) into two documents — one containing all the standards required by law, and another containing advice from engineers in the field. The advisory document would be managed by a private company. Jasny and his cohorts think this will lead to greater inconsistencies in traffic signs and road markings around the country. Already, government statistics indicate that most crashes (52 percent) occur in intersections with traffic control devices, and other documents point out that improperly placed signs can actually increase the risk of collision. 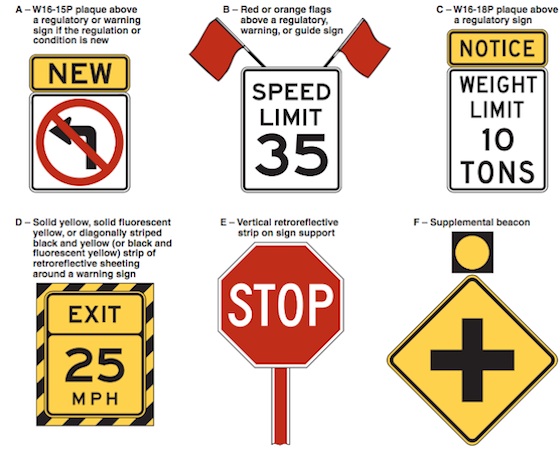 Diagram from the 2012 version of the US Manual on Uniform Traffic Control Devices (Credit: FHWA).

"The problem is, we’re going to have local engineers doing different things in each county, and things will vary from county to county ... it will create a safety risk that doesn’t currently exist out there." The Advocates for Highway and Auto Safety elaborated on these concerns in a letter submitted in March to the Federal Highway Administration (FHWA), the agency in charge of the manual, which accepted 179 public comments on the proposed plan to split it in half, many of which were in favor of keeping it as a single document.

"it will create a safety risk that doesn’t currently exist."

But the FHWA argues that dividing the document into two separate books will cut down on costs and actually make things less confusing for local traffic engineers. "Our proposal would make it easier for state and local transportation engineers to better serve the driving public," said Victor Mendez, administrator of FHWA, when announcing the change earlier this year. The latest version of the manual, last updated in May 2012, runs just over 800 pages. The FHWA’s new plan would cut that down into "two smaller documents."

Right now, the manual contains just about everything a traffic engineer working for a municipal, county, or state government would ever want to know about the laws regulating traffic signs, signals, and road markings in the US, as well as recommended best practices for how and where to place certain items on roads. For example, one section is focused on new standards for "maintaining minimum retroreflectivity," for road signs — that is, the legally required minimum light a sign needs to reflect directly back at a driver at night when illuminated by their vehicle’s headlights so they can read it even in the dark. The manual even goes into painstaking detail about such uncommon features on US roads as roundabouts. 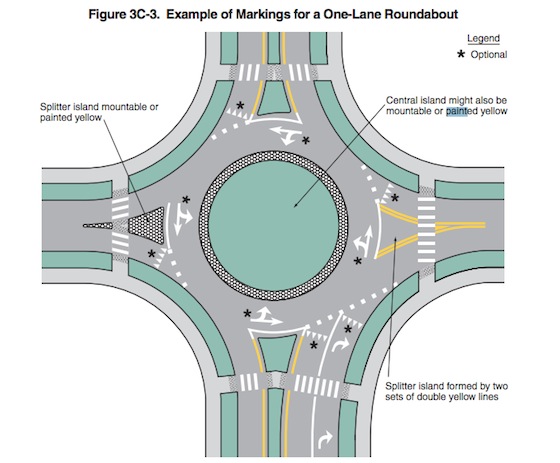 Diagram from the 2012 version of the US Manual on Uniform Traffic Control Devices (Credit: FHWA).

Regulating the uniformity of millions of road signs across America's 3.9 million miles of roadway, has historically been a difficult and diffuse challenge, one that has tested civil engineers, scientists and policymakers alike. This is especially true because the majority of roads — 3.1 million miles — are rural, where oversight is more difficult. The first modern stop sign wasn’t created until the early 1900s, for example, and it took another 30 years for it to be codified in the first Manual on Uniform Traffic Control Devices in 1935. Since then, the manual has been slow to update, with only eight major new editions released over the past 80 years. But the FHWA announced sweeping changes to the MUTCD in the early 2000s, including a deadline of September 2015 for when local governments need to have plans in place for testing the reflectivity of their signs at night and upgrading ones that don't meet the standards.

Today, the MUTCD is facing something of an existential crisis that goes well beyond upgrading sign reflectivity. As Gene Hawkins, a professor of civil engineering at Texas A&M University, puts it: "Who is the MUTCD written for? Is it written for engineers, technicians, local elected officials? Should it contain step-by-step instructions or just basic principles? That’s never been defined." Hawkins is part of a national committee that provides recommendations to the FHWA, and the committee is currently attempting to draft a new strategy document to help answer these very questions, and is aiming to circulate an initial draft in June.

To be fair, the FHWA is trying to speed things up when it comes to traffic safety engineering guidelines. It published new technical documents on road sign reflectivity online just this April, for example, "in response to questions FHWA has fielded since the publications were originally posted," as a spokesperson told The Verge. The FHWA did not say when exactly it would split the manual into two.