AMD Jaguar: the Xbox One and PS4 guts that could power your next cheap laptop

AMD Jaguar: the Xbox One and PS4 guts that could power your next cheap laptop

AMD boasted that its Z-60 Hondo chip would bring Call of Duty to thin tablets, and its boasts were for naught, but it looks like the company's latest processor core is going to see a lot of use in the next generation of cheap laptops. Today, AMD has revealed its basic performance claims for its Jaguar core, the same one that's reportedly built into the chips in both the Xbox One and PlayStation 4. The resulting Temash and Kabini APUs could finally have the combination of performance and battery life you'd need in an inexpensive Windows 8 tablet or laptop. 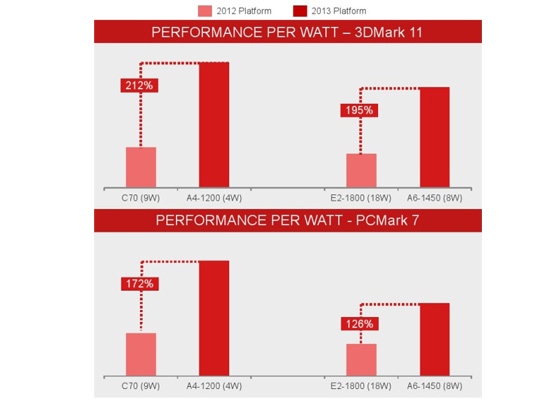 While some of AMD's charts are a little misleading out of context, this one is fairly straightforward: AMD claims that its low-power Temash system-on-chip simultaneously manages to have double the performance in 3DMark11, a graphical benchmark, and a sizable bump in PCMark7, an all-purpose benchmark... with only half the power at its disposal. At just 3.9 watts, there should be little trouble putting a dual-core 1GHz A4-1200 into a completely fanless tablet, and you can probably expect eight-watt, quad-core A6-1450 (which can boost to 1.4GHz) to fit in very thin laptops indeed. 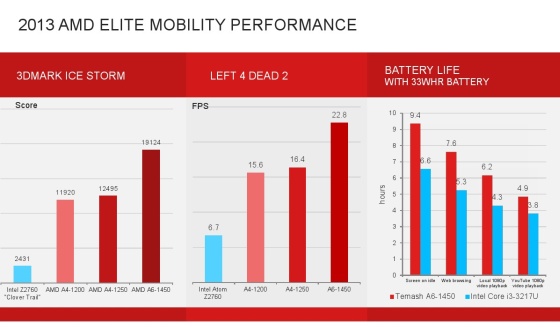 Still, we're not talking about a powerhouse here. AMD says Temash will fit between Intel's still-relatively-powerful Core i3 and low-power Atom families, and it does compete with each, but not necessarily both. It can muster better battery life than the Core i3, and far better raw performance than the Atom, but perhaps not vice versa. 22 frames per second in a game of Left 4 Dead 2 also doesn't make for a very fluid game, though roughly two hours more web browsing or video playback than the Core i3 certainly wouldn't go unappreciated.

With AMD's more powerful Kabini, and processors ranging from nine watts to 15 watts, the advances aren't quite as potent across the board, but AMD again shows its new low to mid-range laptop processors ahead of Intel's Ivy Bridge in battery life and slightly ahead in certain 3D benchmarks.

There's an elephant in the room, though. Compared to its own previous generation, and compared to the current Intel competition, it looks like AMD's very competitive for cheap Windows 8 laptop and tablet chips. But Intel might be about to leapfrog AMD once more. Intel's Haswell processors are coming, and its Silvermont-based Atom processors, before much longer. AMD actually claims that its new silicon should still be able to compete in graphical tasks against what Intel has planned, but the balance of power could rapidly tip. HP, Acer, and Vizio are already building thin machines to show off the longevity of Temash, though, and we're eager to see what they've built before we pass judgement.