Nvidia's GeForce Experience software is starting to do quite a few things. It cleverly optimizes your game settings. It fetches new graphics drivers. It even streams games from your gaming rig to Nvidia's new Shield handheld. And this week, alongside the launch of the GeForce GTX 780 — the company's latest graphics card — Nvidia's training it to do something new: constantly record video footage of your gameplay so that when you pull off a crazy virtual stunt, you can share it with the world. It seems like good timing, considering how the Microsoft Xbox One and Sony PlayStation 4 look to be integrating similar features right now.

Nvidia calls it ShadowPlay, and it's a feature coming this summer to all of Nvidia's Kepler-based GPUs, allowing you to have your system constantly recording up to the last 20 minutes of whatever you're playing on your computer. It uses the H.264 video encoder built right into Kepler to do its work, which keeps it from being such a drag on performance when you're playing. That way, theoretically, you won't ever need to proactively record: just keep it on in the background, and when you do something cool, you'll have the proof waiting for you.

When you pull off a crazy virtual stunt, you can share it with the world

We watched a side-by-side demo of a prototype ShadowPlay and FRAPS both recording the same gameplay in a Borderlands 2 scene, and the differences were already huge: where a scene running at a butter-smooth 59 frames per second plummeted to about 30 frames per second when using FRAPS to record, ShadowPlay had a comparatively minimal impact by lowering the speed of the game to roughly 44 frames per second. Where the FRAPS video file ran 3GB for about a minute, the ShadowPlay was roughly 200MB for the same amount of footage at extremely similar quality. It's not yet clear how Nvidia intends to let gamers edit and share such clips, though. 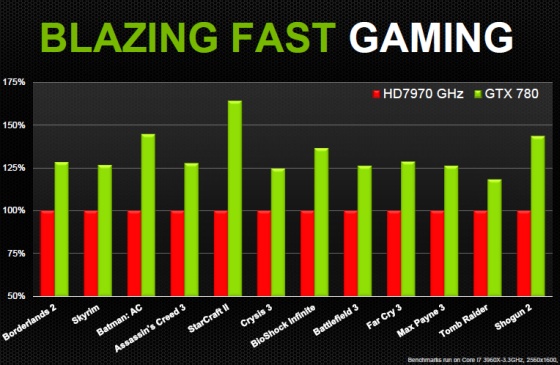 So what's the GeForce GTX 780 all about? Simply put, it's a slightly less powerful Titan graphics card for a far more reasonable $650. It's got the same custom-designed attractive aluminum cooler and the same GK110 GPU as the $999 Titan, but only with 2,304 CUDA cores and 3GB of GDDR5 memory, compared to the 2,688 cores and 6GB in the pricier card. Nvidia tells us that for most gaming applications, the Titan will only add a five to seven percent boost over the GTX 780, but the GTX 780 offers a decent advantage over the previous gen. It allegedly provides 170 percent the performance of the GTX 580 from two generations ago, a sizable chunk more than the GTX 680, and — Nvidia claims — edges out AMD's flagship Radeon HD 7970 GHz edition by a substantial margin in practically every current, demanding game. It won't be nearly as good as the Titan for certain computing tasks, though, as Nvidia's limited the speed at which it can perform double-precision floating point operations for GPGPU computing.

The GTX 780 also builds on Nvidia's attempts to make its graphics cards cooler and quieter by adding a new fan controller with an adaptive temperature system to minimize fan speed fluctuations. Often, the sound of a fan speeding up or slowing down to compensate for heat can make more (and more annoying) noise than simply running the fan at a constant rate. Starting with the GTX 780, Nvidia's attempting to level that out.

Based on the first batch of reviews we're seeing for the GTX 780, it stands out as a solid pick; it's indeed a step below the $999 Titan, but at a vaguely more reasonable price point.