The science of tornado prediction: can technology keep us safe from future storms?

The science of tornado prediction: can technology keep us safe from future storms?

Right now, tornado warnings give us mere minutes to seek safety — but new technology is poised to change that

It's been nearly 150 years since scientists first made efforts to forecast the arrival of tornadoes. But as indicated by this week's storm in Moore, Oklahoma — which killed 24 people and ravaged thousands of homes — they still can't anticipate these potentially deadly weather events with much time to spare. In Moore, residents only had 16 minutes notice that a tornado was forming.

The first guide to tornado forecasting, published in 1888, set the basis for predicting the storms. But today, with new technology that offers a closer glimpse at weather conditions, the complexity of tornado forecasting is greater than ever. "Tornadoes are predicted by looking at present and near-future conditions — including moisture and wind throughout the atmosphere" explains James Elsner, PhD, a climate and weather researcher from Florida State University.

Meteorologists still have to rely on observations

Data is collected from a number of sources — radar, observation stations, weather balloons, planes and satellites, and a network of 290,000 volunteer storm spotters — and then fed into vast mathematical simulations that churn out detailed local forecasts of what may happen in a few hours' time. While it's relatively easy to say that an area half the size of a state may experience tornadoes, pinning down exactly where a twister will touch down is a much tougher job, and can only be done on a timescale of minutes — computer simulations aren't yet reliable enough at the scale of an individual storm, so meteorologists still have to rely on observations.

"Tornadoes can form in different ways," says Elsner. The same conditions that spawn a tornado during one storm might not do so in another. Plus, once the conditions are finally right, the tornado is often down on the ground before anyone has time to react. "They can form quickly and become violent in a matter of minutes," Elsner adds.

Tornado-generating storms need very specific conditions to form — moisture, temperature, and something known as wind shear, where the wind changes in strength and direction with height. The atmosphere also needs to be "unstable" — a term that indicates that if you give a bubble of air a shove, it'll accelerate upward. When you have those ingredients, the stage is set for the development of a thunderstorm that rotates, known as a supercell.

Even when all those factors align, the chances of a tornado hitting the ground are very small. The number of strong, violent tornadoes that occur in a 10,000 square mile area, per year, is 0.1 across the entire US, and only 0.6 in Tennessee, the state with the highest frequency. In other words, plenty of supercells never spawn a tornado, as many a disgruntled stormchaser will tell you.

The average time between a tornado warning being issued and a twister touching down has been refined from 5 minutes to 13 minutes over the last couple of decades. It's an improvement, but hardly adequate to keep everyone in a tornado's path safe from harm. 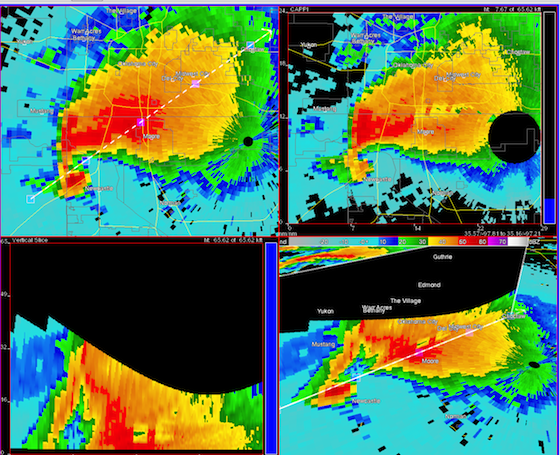 But new techniques to ameliorate that timeframe are on the way. In 2007, meteorologists at the US government's National Severe Storm Laboratory (NSSL) developed a prototype, called the four-dimensional storm cell investigator. This radar can create and manipulate dynamic, 3D cross-sections, so that meteorologists can "slice and dice" storms and view that data from multiple angles and across time. "Scanning up and down with our radar helps," says Elsner. By looking at that structure, it's also possible to see common tornado signatures signatures, like the "hook echo" — a hook-shaped feature that indicates tornadogenesis.

This new radar has also helped forecasters establish more accurate tornado signatures, like the "debris ball," wherein material being carried in the vortex of a tornado can be spotted before the storm touches down. A debris ball signature can verify tornadoes with 70 to 80 percent accuracy. The four-dimensional storm cell investigator is still being tweaked and improved, but it's hoped that the technology will roll out to more radar stations across the US in the coming decade. 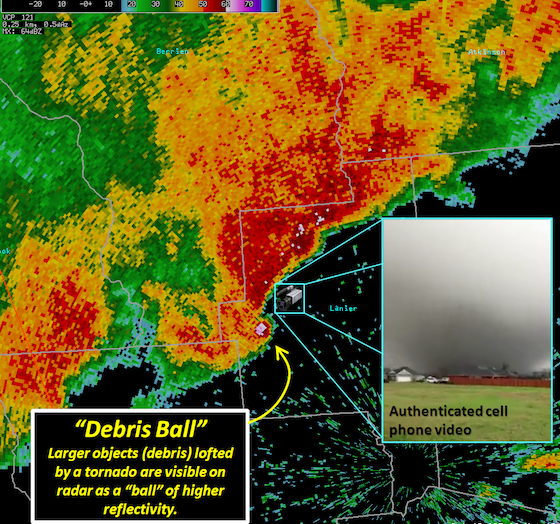 NOAA image of a debris ball in a storm. (Credit: NOAA.)

In addition to better radar, other investigators are working on more sophisticated computer modeling systems — capable of incorporating an unpredictable melee of variables into accurate predictions. "There's pressure, there's temperature, and none of the radars and current sensing instruments can get that at the resolution we really need to fundamentally understand the tornadoes," project leader Amy McGovern, PhD, a meteorologist at the University of Oklahoma, told Science Nation earlier this year.

Her computer models include these variables, giving meteorologists new opportunities to spot signatures that indicate the formation of a tornado — and potentially warn of tornadoes much sooner. This approach is being extensively tested by the research meteorologists at the NSSL, who are keen to get their hands on as many new tools as they can for their forecasting arsenal. Right now it's pumping out much more data than the forecasters need, so getting it to show the usable information and hide the junk is the next important step.

None of this burgeoning technology is foolproof

Unfortunately, none of this burgeoning technology is foolproof. Modeling storm systems is a promising technique, but because storms are incredibly sensitive to tiny changes, using a model — rather than observations — means that forecasters will inevitably lose accuracy. It's these tiny changes that tip a storm between forming a tornado or not, making McGovern and co.'s job incredibly difficult. 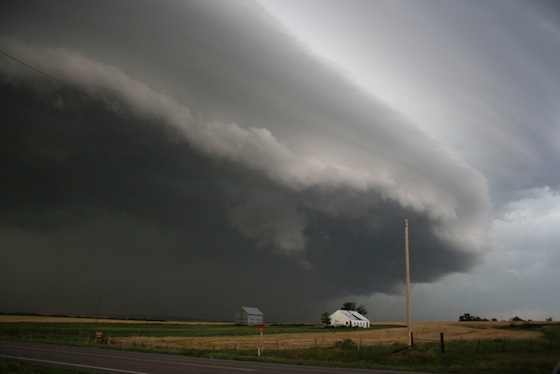 Piling on the pressure is the fact that false positives can do a tremendous amount of harm to residents' confidence in forecasts. Even when urgent warnings are issued, many people don't immediately seek shelter — sometimes because they don't have one, but often because they ignore sirens.

"A lot of times people don't react until they see it."

"We'd like to think that as soon as we say there is a tornado warning, everyone would run to the basement," Ken Harding, a weather service official in Kansas City, told the Huffington Post last year. "That's not how it is. They will channel flip, look out the window or call neighbours. A lot of times people don't react until they see it."

To address that problem, meteorologists are experimenting with issuing new warnings in Kansas and Missouri that use words like "mass devastation," "unsurvivable" and "catastrophic" to get people to pay attention. Two tiers of warnings for thunderstorms and three tiers for tornadoes have been created, based on severity. It's hoped that this might give people more context on the level of the danger that the storm poses, making them less likely to ignore it.

If these techniques — improved radar analysis, better computer models and refined warnings — can be combined, we should see more accurate, effective forecasts being issued further in advance. And that might very well be increasingly important: no long-term trends have yet been established that indicate more tornadoes in the years to come, but Elsner suspects that tornado tracks, at least, are getting longer and wider. That usually means more powerful tornadoes. "Climate change increases the available energy for tornadoes through a warmer and moister atmosphere," he says. "We're battling the critics on this now. Stay tuned."