Google is bringing richer notifications to its Chrome browser (and ChromeOS), allowing developers to tap into the "beautiful, useful, and engaging" alerts for their apps and extensions. The new notifications — which are debuting in today's beta channel release — are capable of displaying formatted text and images. They can also contain direct actions like replying to an email, for example. Google has ambitions beyond singular notifications, too; the company has also built a sleek notification center that combines any alerts you may have missed while away from the computer.

Users will have specific control over which Chrome apps and extensions are permitted to display notifications, so you'll be able to customize just how many come flooding in during your browsing sessions. The revamped notification UI is available in today's Chrome Beta release for Windows and Google says Mac support is also on the way. Developers will need to enable the new style before they appear to users, however.

Update: They aren't fully functional just yet, but the new notifications are also visible in the latest beta (29) of Chrome for OS X. 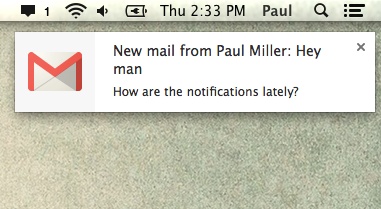