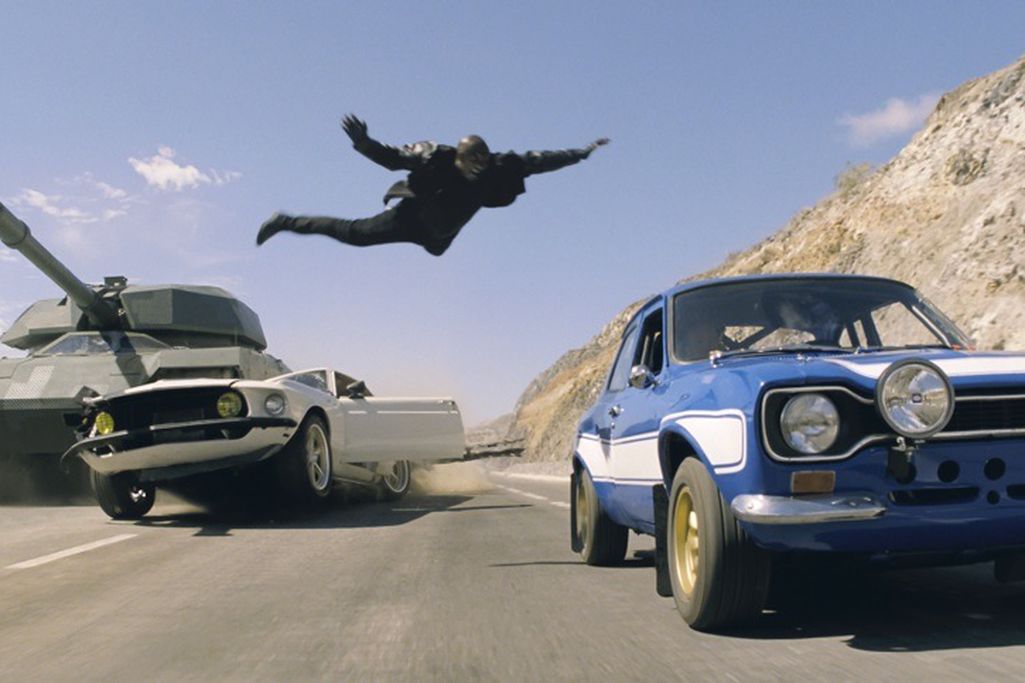 There are a lot of things to say about Fast & Furious 6, which opens this weekend. We could talk about cars, or explosions, or the many new and interesting ways cars can explode now, in 2013. We could discuss new characters, familiar faces, and dead characters who are now alive again. We could ponder why director Justin Lin and writer Chris Morgan are now brazenly retconning everything in sight after making the last four movies in the series together, as though they are being chased by the Action Movie Continuity Police.

We could even just sit around and discuss what exactly Tyrese is supposed to be doing, most of the time. The Verge staff is full of Fast fans, and I’m not sure anyone actually knows.

But here’s a bigger thing to consider, after 12 years and six Fast and Furious movies: maybe only the odd-numbered ones are good. 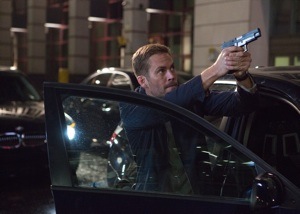 While 2001’s original The Fast and The Furious was basically Point Break with underground drag racing in LA, the series has steadily grown in size and scope: Paul Walker’s Brian O’Conner and Vin Diesel’s Dominic Toretto are now ultra-rich retired international criminals who reminisce about home as they sip beers at sunset in Spain, and Toretto says things like "our old life is done" as he gazes wistfully at babies.

But the reverie is interrupted by Agent Hobbs (Dwayne "The Rock" Johnson), who works for a secret government task force that has no other employees or agents, presumably because Dom and Brian killed them all last time by making their cars explode. Hobbs needs Dom to rally his team to catch a bad guy named Owen Shaw — who appears to be working with Letty, Dom’s old girlfriend.

Played by Michelle Rodriguez, Letty is supposed to be dead — killed during the events of the fourth film, Fast & Furious, and only revealed to be still alive during a surprise final scene in Fast Five that Rodriguez herself didn’t know about. That’s all the hook anyone needs to spring back into action in Fast 6 — Mia, Dom’s sister and Brian’s wife, basically kicks Brian out of the house so he can help. "Be safe," she cheerfully says as the father and uncle of her newborn child drive away in cars that are almost certain to blow up as they jump out of them.

It’s an interesting premise — the superstar thieves are now the cops — and at first it seems everyone’s aware of the intriguing possibilities. "It’s like we’re hunting our evil twins," says Tyrese’s Roman, who does nothing else for the next 20 minutes.

But those possibilities are completely ignored — at the simplest level, we never actually meet these evil twins, or see them interact with their good-guy counterparts. (At one point literally Shaw tells Dom his henchpeople are all interchangeable parts, like so many widgets.) We don’t even really know what they’re trying to steal beyond some vague mentions of a computer chip for a "Nightshade satellite" that can, uh, turn off communications somewhere. It doesn’t really matter, does it? They’re bad guys, and they must be made to explode.

But oh, how things explode. Lin and Morgan might be running out of good reasons for why cars and airplanes and tanks should blow up, but dreaming up new ways to actually destroy them clearly inspires the pair. The action set pieces are spectacular throughout, even if Lin stretches the final plane sequence far beyond the suspension of disbelief. Why does everyone suddenly have grappling hooks? How are those tiny cars bringing down that monstrous plane? How long can that runway possibly be? Whatever, just look at this GIF:

An earlier sequence is notable because it features Ludacris saying the bad guys have a tank.

They do. They do have a tank. ("We crushed a lot of cars, as usual," says producer Neal Moritz in the press guide. "The tank was so efficient we were able to shoot a lot of this in real time.")

These masterful set pieces and the obvious fun everyone is having — Johnson and Diesel are basically having a growling contest — do a serviceable job of masking the terrible plot, but everything falls apart under even the slightest scrutiny. Why is the team surprised by Shaw attacking a military convoy when they’ve been recruited specifically because he’s been attacking military convoys? Why does Brian worry so much about a trip to the US if he’s working for the cops now? Why is Dom taken so off-guard by Shaw attacking his family after Shaw explicitly warns him that they will be targeted? What is the point of introducing Shaw’s awesome LeMans-inspired flip cars if they’re never to be seen again?

And seriously, what is Tyrese supposed to be doing? 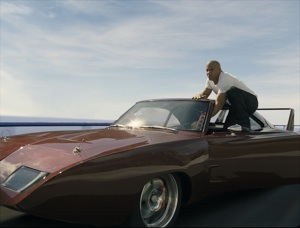 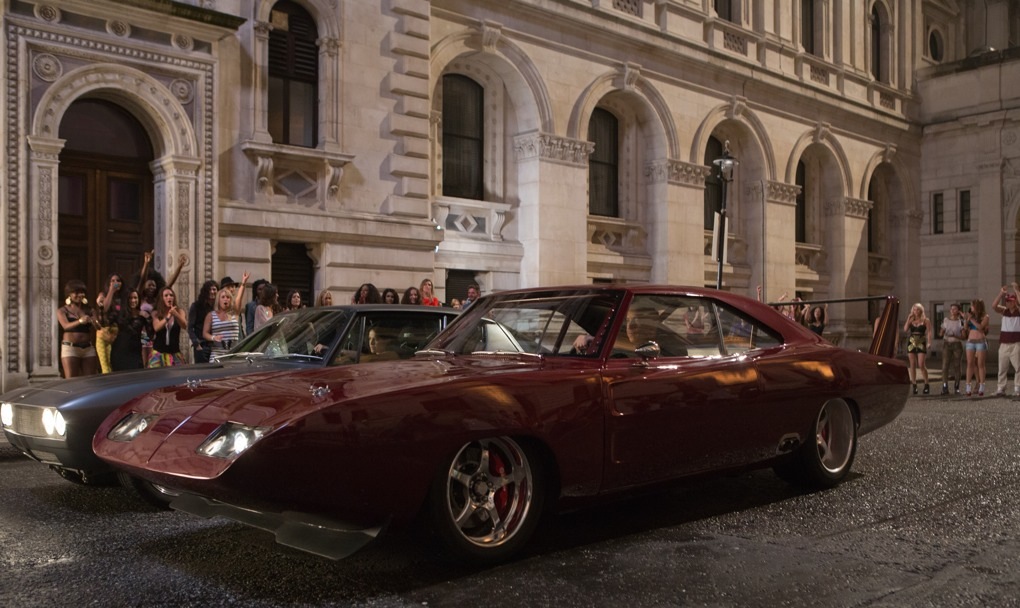 But while there’s only enough story work in this movie to advance the plot between explosions, Lin and Morgan spend significant effort wrapping up loose ends and connecting the other five movies together into a unified saga. For example, 2006’s Tokyo Drift is chronologically the final chapter in the current series because the character Han dies in it, so they can’t use newer cars in this movie. So, yeah, the bad guys have a "chip gun" that can fire LEDs into modern cars and control them, so Dom and his crew need to use muscle cars once again. This little detail drives an entire sequence in the middle of the movie — a sequence in which our team of masterful car thieves ultimately just buy whatever they want because hey, they’re all millionaires now.

Tokyo Drift actually haunts the entire movie — if you’re familiar with Han’s situation in that movie some of the foreshadowing in Fast 6 is about as subtle as a giant red arrow pointing at one of the characters. And the last scene explicitly transports the series beyond the events of Tokyo Drift — although at this point Han is probably still alive, just waiting for the filmmakers to figure out a way to retcon his fiery death into a convoluted plot for the already-booked seventh movie.

And that’s really it. If Fast Five cleverly grafted an all-out action movie onto the bones of a series about underground street racing, Fast & Furious 6 is an attempt to turn the whole thing into a soap opera with a casual disregard for physics. Some people live, some people die. Some people come back from the dead. But whatever happens, they’re a family. And everything around that family will almost certainly blow up.

Also, Tyrese will be there.

Fast & Furious 6 is now playing. If you’d like to talk about Dom and Brian’s adventures — spoilers and all — join our discussion in The Fringe!