It looks like Google has a redesigned version of Gmail coming up, if a slide shown off during a developer event at Google I/O last week is any indication. As spotted by Android Police, a slide during the "Structure in Android App Development" talk showed off Gmail for Android featuring the new left-side navigation drawer. Rather than using the current Gmail pull-down menu, a larger drawer can be pulled in from the left with the inbox, starred items, labels, and other typical Gmail groupings. It also seems the bottom "action bar" is being removed as well — check it out for yourself at 23 minutes in the video below. These are some fairly logical changes for Google, but anything that streamlines the app should be welcome by users. Of course, there's always a chance that this was just a mock-up created for the presentation — until the update arrives, we can't be sure these changes are the real deal. 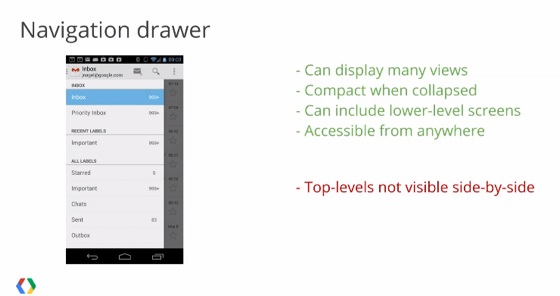