At midnight last night Netflix released the highly-anticipated fourth season of Arrested Development, and series creator Mitch Hurwitz has now posted an open letter thanking fans for their support — and offering some viewing suggestions as well. In the handwritten note — made out to "our friends, fans, supporters, detractors, haters, enemies, and arch enemies," Hurwitz expresses his gratitude on behalf of everyone involved with the creation of the new season. "We are all so grateful for another chance to bring these characters to life," he writes.

While many expect Arrested Development to be a binge-watching event, earlier on the new season had been described as a series of a la carte episodes that could be watched in any order the viewer decided. However, according to Hurwitz that's not the optimal viewing scenario. "It's been our great joy to bring this to you on Netflix where you can access it whenever and however you want," he writes. "Except, you know, it's really meant to be watched in order." If you'd like to start watching yourself, the new season of Arrested Development is available now on Netflix. 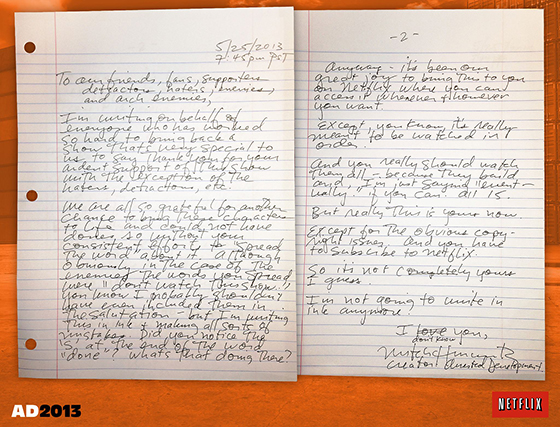