DJs in the mix: with new iPhone app, can Mixcloud do what SoundCloud doesn't?

DJs in the mix: with new iPhone app, can Mixcloud do what SoundCloud doesn't?

The DJ-friendly streaming service finally gets a decent mobile experience

Music upload and streaming service Mixcloud is releasing a thoroughly restyled version of its iOS app today, seeking to grab some more share of the still-immature market to become the "YouTube of audio." Competitor SoundCloud has commanded a lot of attention in the space, but Mixcloud — which hasn't taken any outside funding — has some advantages that make it appealing to certain demographics where SoundCloud simply doesn't work.

Specifically, Mixcloud was built to appeal to DJs who are looking to upload and share mixes. By all appearances, it's a great time to be targeting dance music fans: artists like Deadmau5 and David Guetta have "crossed over," Daft Punk's new single "Get Lucky" is hovering near the top of Billboard's Hot 100 chart, and the country's biggest music festivals are booking electronic artists alongside mainstream ones. Unlike SoundCloud, which simply takes down copyrighted material that it finds or has reported, Mixcloud has licensing agreements in place. DJs tag their mixes with the tracks they contain at the time of upload, and royalties are paid in turn. It's a win-win: listeners can follow along with track lists, and presumably, Mixcloud gets a cut when they click the "buy" button to purchase a track they like. The service also offers unlimited storage and doesn't charge subscription fees. 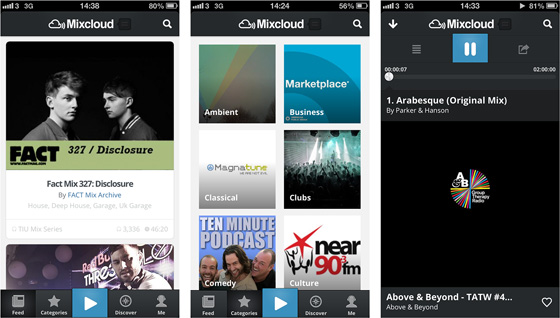 For listeners, it amounts to a great Pandora alternative, particularly for dance music enthusiasts — but historically, Mixcloud's story on mobile has been awful (it didn't even have an Android app until last year). The new iOS app coming out today is a massive visual improvement over the outgoing version, which the company had clearly abandoned some time ago — it was never updated to take advantage of the iPhone 5's taller screen, for instance — and adds a "Discover" tab that surfaces mixes that might appeal to you based on your listening history.

Forget the app and go straight for the new mobile site

The pre-release version I tested had a tendency to crash quite literally every few seconds, but there's an alternative: Mixcloud is also rolling out a new mobile site that essentially brings the new app's look and feel to a browser window that doesn't require Flash to use. It worked seamlessly — I could flip through it, select tracks, log in and manage my own uploads, essentially everything the app can do — and iOS treats it as an audio app when the browser's closed, so you can listen in the background. There's basically no reason to install the app, in fact. It worked great on both the iPhone and on an Android 4.1 device I tested; Windows Phone 8, sadly, not so much.

If you're not into dance music and you're not a DJ looking to upload mixes, Mixcloud is still really thin — it has other categories, but you're generally better off looking elsewhere. In the EDM space, though, the new app and mobile site are sorely-needed improvements that make the service worth a hard look.