One month after adding one of Facebook's most famous features, Instagram finds itself on a slippery slope

"Add People," Instagram beckons in its latest app update. Add friends, tag their faces, index their eyes and ears forever. Each Instagram profile now includes "Photos of You," a list of photos friends have tagged you in, just like on Facebook. The social network added photo tagging more than five years ago, and it was by all means a killer feature. No human can resist the urge to see a photo they have been tagged in, even if they often wish they hadn’t been identified. Alongside Google, Facebook helped define our perception of our "indexed self" online: Google understands where and when your name has ever been mentioned on the internet, while Facebook indexes your face across time and space.

By asking us to tag people, Instagram, the world’s trendiest mobile photo-sharing app, has invoked something bigger. Does it still feel good to be indexed — to be placed in a stack and categorized, listed, and identified? After one month using the new feature, I get the feeling that by following in Facebook's footsteps Instagram is jeopardizing its success. 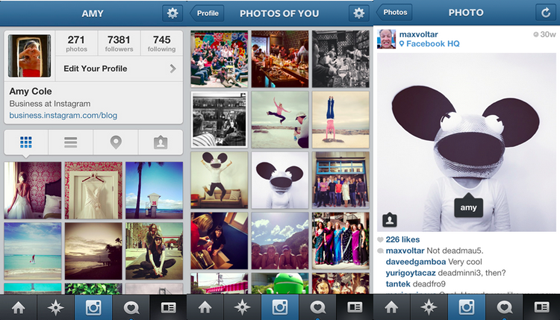 With every photo we upload, location we tag, and status we post, a new data point is created. A series of strata is formed across place, date, and time, and there’s an app to mine each layer for gold. Facebook's new search engine even lets you cut across several layers simultaneously. For the last decade The Great Indexing has been enthralling and exciting. Look at all the "me" in all these different places! A marked serotonin boost accompanied every new website you might sign up for, each providing a new place for you to inject pieces of your digital self.

But recently, a rise in "ephemeral" apps that reject the notion of media permanence illustrates that some people have grown frustrated and wary with all the indexing. For some, wall posts public to their entire friend network have been replaced by private messages. The MMS was replaced for many by self-destructing photos sent with Snapchat. As layer upon layer of information has accumulated, we’ve become acutely and increasingly aware of just how much digital stuff has our names and faces on it.

The new feature adds transparency about who appears in each image, but Instagram has built its success on rooting its appeal in the "now" rather than in the faces of your friends. You fitfully scroll through a stream of photos — flick, stop, flick, stop. There has been no burden of accumulated identity as there is on Facebook, where friends are responsible for a lot of the stuff that appears on your profile. "45 percent [of teens] have removed their name from photos [posted by friends] that have been tagged to identify them," says a new study from the Pew Research Center. With each added layer of transparency comes a new level of maintenance. Facebook, technically, is most transparent of all, yet its labyrinthian settings pages are difficult to navigate. Having the ability to tag and untag is useful, but it adds complexity to Instagram, which has appeal for being a simple list of photos happening now.

The ability to tag and untag adds complexity to Instagram

The Pew study goes on to note that as our networks grow in size, we become more and more likely to delete comments, untag photos, and block people. One of Instagram’s most refreshing "features" early on was that it offered the opportunity to start from scratch, to create a new friends list based not on social agreements to share things, but on your own desire to follow someone that’s interesting. Instagram’s new tagging feature seems benign and doesn’t appear to signal the arrival of anything horrible, it makes viewing the photos someone’s been tagged in simpler. In other words, as Instagram grows larger and as more of our parents eventually do join the service, it will be a lot easier for them to see what you’ve been up to — Photos of You posted by friends alongside a profile page of photos you yourself have curated. Unlike Facebook, the majority of my Instagram friends have public profiles, and thus public Photos of You sections.

Facebook acquired Instagram to hedge against an uncertain future, and it should pay close attention that the two services don’t become too much alike. Instagram is compelling in part because of how refreshingly lacking it is in "social networking" features like direct messages, tagging, events, and relationships. "One of the most common things people do on Instagram is @ mention their friends when they want to add them to a photo," Instagram says. Users were essentially asking for easier tagging, but that doesn’t necessarily mean people want an aggregate of all photos tagged of them embedded on their profile. The profile was formerly created solely by you, whereas it is now in part created by friends. In this choice, Instagram risks becoming another burden, an online identity we need to police, rather than an ephemeral stream we can dip into at our pleasure.