The head of the World Health Organization is raising the alarm for health officials on an emerging deadly Middle Eastern virus. In her closing speech at the organization's annual international meeting in Switzerland yesterday, WHO Director General Margaret Chan said: "looking at the overall global situation, my greatest concern right now is the novel coronavirus." The virus, named MERS (Middle Eastern Respiratory Syndrome) has killed 22 people and infected over 40 in multiple countries since it was first detected in Saudi Arabia back in November 2012. The term coronavirus comes from the molecular shape of this type of virus, which also includes the older SARS virus.

"my greatest concern right now is the novel coronavirus."

Chan continued: "The novel coronavirus is not a problem that any single affected country can keep to itself or manage all by itself. The novel coronavirus is a threat to the entire world." In terms of how big of a threat, the WHO said that it remains to be seen, but noted that doctors around the globe should be on the lookout among travelers to the Middle East for symptoms of MERS. The symptoms start mildly as shortness of breath, fever and a cough, but can quickly progress to severe pneumonia and eventually, organ failure. "Health practitioners should be very alert to unexplained cases of severe respiratory illness," WHO spokesperson Gregory Härtl told The Verge. "If someone has been to the Arabian Peninsula and develops these types of respiratory symptoms, they should get to a healthcare facility as soon as possible and immediately let people know where they have been." 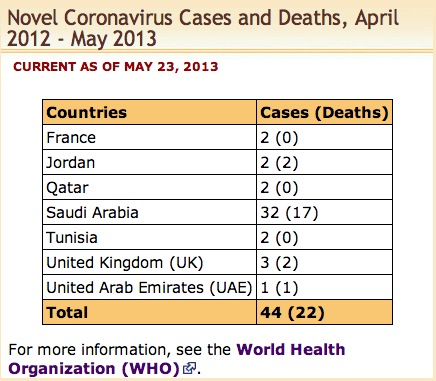 There has already been some international controversy in terms of coordinating efforts to fight the MERS virus, specifically regarding a contentious patent on a specific part of the virus by the team of Dutch scientists who initially isolated and identified its genetic sequence. Critics say the patent will block research in the name of public health, but the Dutch team contends a patent will spur investment from pharmaceutical companies into drugs and vaccines. Currently, there is no vaccine for MERS, nor antiviral drugs designed to target it, and doctors are testing the effectiveness of available drugs.

"We will do what it takes to make that response as robust as possible."

WHO declined to comment on reports that the agency would investigate the patent matter. "What's most important is that the public health response is as robust as possible, and we will do what it takes to make that response as robust as possible," Härtl told The Verge. But as an offshoot of the United Nations without much regulatory power, WHO has a limited capability to intervene in international health disputes. The agency is organizing an international team of scientists that will will travel to Saudi Arabia within the next few weeks to investigate the source of the outbreak, and is considering hosting a separate international conference in Cairo to specifically address MERS.