A day in the life of a hungover cyborg

I needed to find the strength to walk downstairs to the hotel bar wearing Google Glass.

I was also slightly worried about wearing a gray jacket with gray pants and gray shoes, but in the end no one really asked me about that.

first I had to make it downstairs

I was in Indianapolis as a guest of Chip Ganassi Racing, a legendary racing team that had four cars in the Indy 500 and two cars in the Coca-Cola 600 NASCAR race in Charlotte later in the day. The plan was to watch the race in Indy, hitch a ride on the team plane to Charlotte, watch the NASCAR race, and then fly to LA for the start of the D11 conference. It was an ambitious itinerary, and I was hoping Glass would somehow make it easier.

But first I had to make it downstairs.

The thing about Glass is that it's a gigantic LOOK AT ME plastered on the front of your face; a call for attention that also serves as an invitation for people to openly judge you. Most of us walk through life at various levels of happy anonymity, but Glass puts a spotlight on you unlike anything I've ever experienced.

"Is that Google Glasses?" they all ask. "What is it doing right now?" I had my little speech memorized by the third or fourth time around. "It's not doing much," I'd say. "It's kind of like a GoPro with Siri." I let a few people try it on, but no one could figure out the interface. "It just tells the time?" they'd ask, and then I'd have them take a picture of me, most of which I promptly deleted. I kind of wish I hadn't, now. They would have made an interesting time-lapse documentary of my journey to the bottom of the hotel's Woodford Reserve.

'What's in it for us?' asked Todd Palin

At one point during the evening Sarah Palin arrived at the hotel and made a smooth, practiced pass through the bar shaking hands and taking photos with a long line of admirers. I stood next to her for several minutes but she wouldn't take a photo with me or wear Glass. "What's in it for us?" asked her husband Todd, staring squarely at the camera and screen floating just above my hazy, bourbon-enhanced eyes. "We don't know what company you're with."

When I told him I wasn't after an endorsement but was rather a journalist interested in her opinion of Glass, he icily asked me to leave. 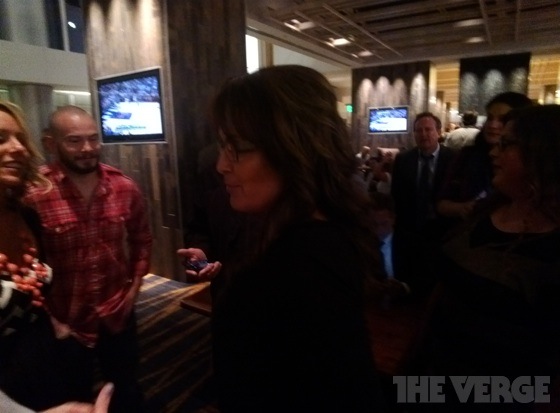 I expected things to be much different once we got to the race the next morning — the Indy 500 bills itself as "the greatest spectacle in racing," and I assumed that a disastrously hungover nerd with extreme bedhead and weird glasses could quietly fade into the background of a 400,000-person crowd engrossed in 220mph competition.

I was a spectacle at the spectacle

It was not to be. Instead I was a spectacle at the spectacle — and because I couldn't wear my regular mirrored sunglasses to hide my bourbon-destroyed eyes, many of the curious questions I received about Glass were followed up with concerned questions about my water and Advil intake. "Is that Google Glasses?" well-intentioned strangers would ask. "Do you need to lie down?"

There was no escape — when I ducked into the men's room to try and salvage my insane hair I felt all eyes lock in on me as I waited in line. Everyone laughed as I suddenly realized the issue and yanked Glass off my head with a stuttering apology, and then the questions resumed as I went about my business. The privacy issue with Glass at this stage in the game isn't about other people — it's about you, the idealistic believer in Google's vision of the future.

My little speech about Glass being a GoPro with Siri was getting pretty slick by the middle of the day — a half-dozen diet sodas, a few quesadilla slices, and two Miller Lites had pepped me back up, and I worked in a little soft-shoe to make Glass seem more useful. The screencast feature that mirrors the Glass display in the Android MyGlass app was a big hit, as was asking Glass obvious questions about the Indy 500. My Google search history will forever reflect that I appear to be very interested in how many laps the racers run. (It's 200.)

But lacking a browser, Glass will sometimes totally fall down. "What time does the Indy 500 start?" yielded nothing except the first jumbled sentences of a few random SEO spam pages — and since you can't click through to find the real answer, that's where you're stuck. And because Glass lacks any real context about where you are or what you're doing, things that seem obvious don't really work. "Hey, who's driving the number 8 car?" would be a great question for Glass, but instead I stood there mumbling "8 car Indianapolis driver" and thinking about how much faster it would be to use my phone. (It's Ryan Briscoe, in case you're wondering.)

And that was when I was safely inside the Ganassi owner's suite, connected to Wi-Fi. As soon as we headed down to the pits and Glass was reliant on my Nexus 4's AT&T service, it became almost totally useless — Ganassi team members all had the largest Mophie cases they could find because notoriously poor signals at racetracks destroy phone batteries. I felt both of my phones getting warm in my pocket as the radios went into overtime, but Glass kept cheerfully indicating that tweets and messages had been sent, never telling me that it had lost connectivity — the sort of crucial ambient information a nerd wearing a head-mounted display would want to know. Later, when connectivity came back, it sent everything in a barrage without letting me know.

Disconnected from the internet, Glass reduces into a head-mounted camera you can't aim very well — adjusting it so you can see the display doesn't mean it's adjusted to shoot photos and videos of what you're actually seeing. In my case, the camera tended to shoot slightly above and to the right of what I was seeing, with a slightly smaller field of vision, tilted at an angle. The bright sun also made the display extremely hard to see, so my attempts to correct the camera's aim while shooting video resulted in some serious eye strain. Simply giving up and assuming it was recording some version of what I was seeing also backfired — instead of a video of a pit stop, I recorded a video of my hand using a DSLR to shoot photos of a pit stop. Whoops. 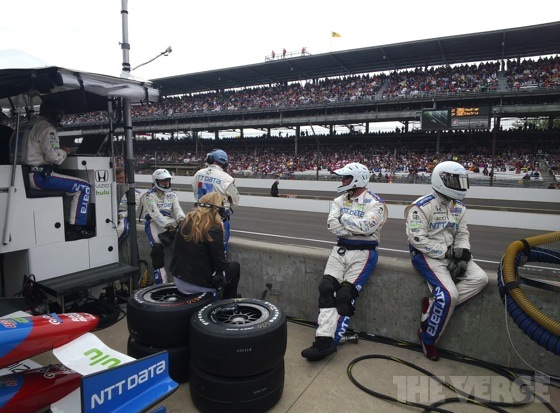 Walking out onto the racetrack also meant that Glass couldn't hear a word I was saying over the roar of the crowd and the engines. That meant I was taking pictures by clicking the physical shutter button on the frame, again moving the camera. I managed to get some really good shots, but I was never able to capture a car going by at speed — the delay between pressing the shutter button and the camera firing was just too long, and the camera's non-adjustable shutter speed was too slow to freeze motion anyway.

Once I got photos and videos I liked, I found myself struggling to share them. I have two good friends who are huge racing fans, and I was eager to send them as many photos of my day with the team as possible. But I couldn't — even if I'd had connectivity, Glass only really lets you share photos privately with Google+ contacts, and the only people I know who use Google+ are Google employees and tech reporters who stalk Google employees. There's apparently a way to email photos, but it wasn't obvious enough for me to figure it out and not miss any of the action.

I'm not sliding into the cyborg zone without a fight

Sharing straight to Twitter and Facebook was much easier, but it requires you to look up at the display and use your hand to manage all the necessary tapping and swiping. At that point I'd rather be using a phone again — I can take much better photos with a phone, it's easier to review and share them, and the possibility of accidentally tweeting the wrong thing with no easy way to delete it doesn't haunt everything you do.

By the time we left Indy and got on the Ganassi plane, Glass had died — the battery drains insanely fast, and it simply couldn't make it through the entire race. I wasn't wearing it while it charged during the hour-long ride to Charlotte, but I still found myself looking up occasionally — after several hours I'd gotten used to simply shaking my head and checking the time with a glance. At first I thought it was just a funny new habit, but then I began to worry. Too easy, I thought. I'm not sliding into the cyborg zone without a fight. 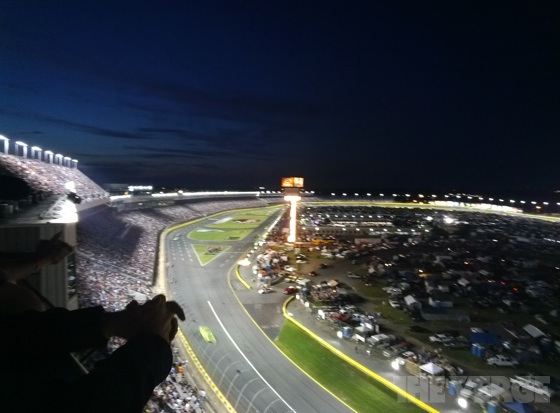 NASCAR is loud. Really loud. Louder than you'd expect, even if you were already expecting it to be loud. It's also a radically different vibe than IndyCar. The Indy 500 felt stately and majestic, rooted in tradition and family, while arriving at the Coca-Cola 600 in Charlotte was more like going to a rock concert where it was totally acceptable to wear overalls without a shirt. But there are also serious smarts at work: the Ganassi team has 25 engineers working full-time to make its cars go faster, and some 152 employees work at a 182,000-square-foot facility actually building each car by hand.

I loved it there.

Glass, on the other hand, stopped being useful. Connectivity was once again an issue, and the lack of light from the setting sun wasn't doing the camera any favors. And my video of our high-speed golf cart ride through the infield offers no sense of the incredible energy and visceral, roaring sound that permeated the place. Glass fools you into thinking that taking a video from your approximate perspective is enough to capture the full emotional weight of an experience, but instead it highlights all the pieces that are missing.

By the end of the day, I had become more interested in asking people what they thought Glass was doing instead of delivering my little speech about what it actually did. Almost everyone thought it was on all the time, displaying ambient information or augmenting my entire field of view. One person told me she thought I was disabled and it was a new kind of prosthetic vision device.

But everyone universally assumed Glass was always connected to Google's servers, collecting video and other data in order to return useful information to the display in real time. That's the intuitive payoff to always wearing a display and camera on your head — a payoff so enormous it would conquer modesty and send me charging down the stairs to that hotel bar without a second's hesitation.

But in order for Glass to deliver that payoff and succeed in its mission of becoming invisible, it has to become far more intrusive. Navigating the balance between utility and privacy is Google's biggest existential challenge as a company, and it's hard not to see Glass as the physical manifestation of that struggle — the day Glass goes from being activity-based to ambiently aware is the day Google changes forever.

Until then, Glass will remain an object of curiosity, a flashpoint for attention with no obvious benefits to the uninitiated. Like racing, Glass is religion, and converts must be prepared to explain and defend their faith constantly.

My thanks to Chip Ganassi Racing and team sponsors Vizio and Hulu for inviting me to tag along on race day wearing Glass. My travel and hotel expenses were paid for by Vox Media, as per The Verge's ethics policy.