Remaking Rio: turning an urban dystopia into an Olympic playground

Remaking Rio: turning an urban dystopia into an Olympic playground

With the World Cup just 12 months away, Brazil is scrambling to put its best foot forward

On March 22nd, police in Rio de Janeiro clashed with demonstrators outside the city's Maracanã football stadium, where members of various indigenous groups had been squatting in protest. Earlier, the protesters had received eviction notices from the government, which planned to build a new parking lot where their homes then stood.

Less than a week later, an American tourist was brutally gang raped on a transit van near Rio's popular Copacabana district. The 21-year-old woman was abducted along with her boyfriend, who was beaten with a metal pole and forced to witness her assault at the hands of their three captors.

Circumstantially, the events were unrelated; one stemmed from a deliberate social policy, the other from a random act of violence. But they both point to longstanding issues of crime and inequality that have suddenly come to a head in Brazil, where planners and policymakers have been scrambling to prime the country to host the 2014 World Cup — to be held across 12 different cities — and the 2016 Olympic Games in Rio.

As with most global sporting events, the upcoming World Cup and Olympics have put Brazil under considerable strain; stadiums are rapidly being renovated, new roadways are being built, and hotels are gearing up for an influx of foreigners. Officials have also been cracking down on crime — particularly in Rio, where gangs and druglords maintain tight control over the city's notoriously violent slums, or favelas.

Some welcome the upcoming events as an opportunity for Brazil to build much-needed infrastructure, and to finally address its urban crime problem. But others fear that the country may be rushing to polish its image without considering the long-term social consequences that its policies may hold.

In some cities, residents have been relocated to make way for new highways or other public projects. Officials in Rio have announced plans to demolish some 3,000 homes, though some say the final tally may be much higher. That pales in comparison to the estimated 1.5 million that were displaced leading up to the 2008 Olympics in Beijing, but Brazil's government is far less authoritarian than China's, and Rio's demographic profile is significantly more complex.

Larissa da Silva Araújo, an activist at the National Coordination of the Popular Committees of the World Cup (ANCOP), says evictees tend to be poor minorities from densely populated areas. ANCOP, a Brasilia-based social advocacy group, published an open letter last month in which it lambasted the government’s relocation policies, claiming that they threaten to displace more than 170,000 people nationwide.

"They simply mark your home, give you some time to go away, and destroy it."

Citing the March protests outside the Maracanã stadium, the group accused the government of resettling its residents through heavy-handed means, and on often unfair terms. The UN Human Rights Council expressed similar concerns in 2011, when its housing expert said Brazil's lack of transparency and fair negotiations could lead to widespread homelessness and more informal settlements.

"Normally, [evictees] are forced to leave their homes and have one month to find another place," Araújo tells The Verge. Others are offered monetary compensation, she adds, though these sums are often not large enough to purchase another home within the same region. Some former favelas have seen real estate prices skyrocket in recent years, with wealthy foreigners buying homes in areas once dominated by the drug lords and gangs that have since been cleared out. Sometimes, Araújo says, former residents are evicted through more forcible means.

"They simply mark your home, give you some time to go away, and destroy it," Araújo says. "Just like that." 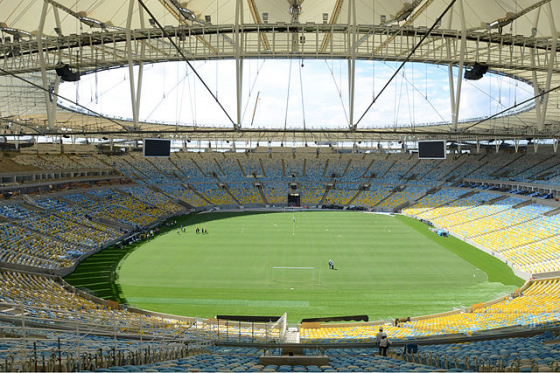 Dr. Silvia Ramos, a sociologist and coordinator of the Center for Studies in Public Security and Citizenship at the Universidade Cândido Mendes in Rio, acknowledges the widespread suspicion that the government is using the World Cup and Olympics as an excuse to gentrify poor neighborhoods. Yet while critics accuse the government of pandering to "big business, tourists, and the wealthy," Ramos says there are many who feel such changes could bolster the country's economy.

"Some residents see the games as an opportunity to progress, make money, and improve their lives," Ramos said in an email to The Verge.

If history is any indicator, it's unlikely that Brazil will see much of a short-term profit from either the World Cup or the Olympics. But officials say the changes and renovations introduced over the next few years will pay bigger dividends down the road.

Yet Fernandes makes no secret of the fact that the Cup and Games mark something of a coming-out party for Brazil and its rapidly growing economy — now the sixth largest in the world.

"People will be able to see other aspects of Brazil not normally associated with its global image in terms of a stable, democratic country which has a number of very advanced technological capacities in a number of areas," Fernandes added.

Nowhere will the world's spotlight be brighter than in Rio, where officials have redoubled their efforts to rein in crime and violence.

According to the UN Office on Drugs and Crime, Brazil remains one of the most violent countries in the world, with an estimated 41,000 murders in 2012 alone. (The US, by comparison, had just under 15,000.) Rio's favelas have long been a bastion of homicide, due in large part to territorial disputes among the gangs and drug traffickers that control them.

A less aggressive approach pays dividends in some favelas

In the past, police have deployed aggressive and controversial tactics that turned some parts of the city into bona fide war zones. According to a 2009 report from Human Rights Watch, the police force in Rio and Sao Paulo combined have killed more than 11,000 civilians since 2003; an earlier BBC investigation found that hundreds, and perhaps thousands, of people are killed by police every year.

Recent years have seen the police adopt a less militaristic stance. In 2008 — one year after Brazil won its World Cup bid — the city began deploying Police Pacifying Units (UPPs) across some of its slums. The idea was to establish a permanent presence within targeted favelas, providing both law enforcement and social services to residents. Thus far, results have been largely positive.

"Every community wants a UPP now," says Dr. Ignacio Cano, a senior lecturer in social sciences at the State University of Rio de Janeiro. Last year, research from Cano’s lab showed that Rio's UPPs had reduced violent crimes by 78 percent in neighborhoods they patrolled, corresponding with broader declines in homicide rates over the past decade. UPPs have encountered some confrontations with gang leaders, but Cano says they've been mostly well received by favela residents.

Rocinha, the largest favela in Rio

The problem, he says, is that there aren't nearly enough UPPs to control all of Rio's 600 favelas. So far, the government has deployed its units across 30 slums — mostly in favelas bordering more affluent neighborhoods, and far from the most violent gang strongholds in the western part of the city. Perhaps wary of another high-profile attack on a foreign visitor, police have chosen to prioritize favelas closest to the touristic areas that World Cup and Olympics attendees will frequent most.

Cano and his colleagues say that unless the government gives more attention to favelas with higher homicide rates, it may inadvertently create deeper social and economic divides.

"I hope we will fight to maintain what we have achieved."

"Right now, [Rio] has a very peculiar model of segregation, with rich and poor living very close to one another," Cano says. "The risk is that after these UPP projects, we may end up with a more traditional model of segregation whereby we have a peaceful and relatively prosperous center, and a very violent and poor periphery."

His warning underscores a common fear among many in Brazil: what happens after 2016? When the Olympic torch dies out, will the UPPs disappear with it?

"Many locals, and even the police themselves, fear that after the Olympics, the UPPs might end — as if it were all a kind of 'stage set,' or 'scenic town' for the Games," Silva says. "I personally do not believe it, because we fought for two decades to police on more civilized terms. And I hope we will fight to maintain what we have achieved."