Microsoft is teaming up with GlacierWorks to launch Everest: Rivers of Ice, an interactive website that lets you explore the areas around the world's tallest mountain. Built entirely in HTML5, Rivers of Ice contains gigapixel panoramas that capture life in the Himalayas, and depict the daunting task for mountaineers wishing to climb 29,000 feet.

The site launches in honor of the 60th anniversary since Sir Edmund Hillary's first successful summit, and the 50th anniversary of the first American to successfully summit Mount Everest. David Breashears, a mountaineer and filmmaker, who became the first American to reach the summit of Mount Everest twice, founded GlacierWorks as a non-profit that's designed to highlight the changes to the Himalayan glaciers. While there's a debate whether they're melting or not, Rivers of Ice includes comparative photography and high resolution imagery to let you make your own mind up about climate change. 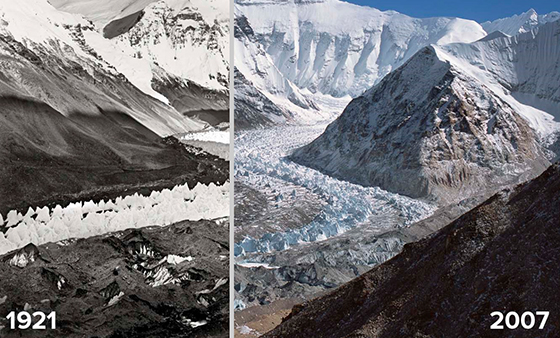 GlacierWorks has undertaken 14 expeditions to the Greater Himalaya over the last seven years to document changes in the region's glaciers and capture them with Canon 5D Mark II cameras complete with a number of Canon and Zeiss lenses. The imagery is almost 7TB in size in total, with individual photos recorded at 5616 x 3744 resolution (21-megapixels). GlacierWorks stitches the images together, with one particular photo resulting in a resolution of 120,000 x 31,840 (3.8 billion pixels).

For its part, Microsoft has helped turn these mega stitches into a usable interactive site using the latest HTML5 techniques and its own Rich Interactive Narratives (RIN) project developed by Microsoft Research. The technology helps stitch together panoramas, videos, documents, and other visualizations. The site will work in most modern browsers, but it's particularly impressive in Internet Explorer 10 with touch (naturally). Touching and holding on one of the various panoramas allows you to simply circle and zoom in, with pinch-to-zoom support also included.

If you've always wanted to venture around Everest or the rest of the Himalayas, but you're not fond of ladders or days of scaling sheer vertical rock faces at up to 29,000 feet then this is the next best thing. It's available immediately at GlacierWorks, complete with bird's eye views, and an interactive guide and map of the Himalayas.