Researchers at the Harvard School of Engineering and Applied Sciences have grown microscopic fields of flower-like structures made of crystals. Project lead Wim L. Noorduin and his colleagues were able to modify the growth of the crystals through tiny chemical alterations of a fluid containing water, liquid glass, and the salt barium chloride. Carbon dioxide from the air dissolved into the solution, forming solid barium carbonate crystals. "This precipitation happens spontaneously," says Noorduin, but by controlling the amount of carbon dioxide that dissolves into the solution, the team was able to change the way the crystals formed. A high amount of carbon dioxide led to "broad, radiating leaves," while low carbon dioxide levels could create "a thin stem, or a rosette of petals." 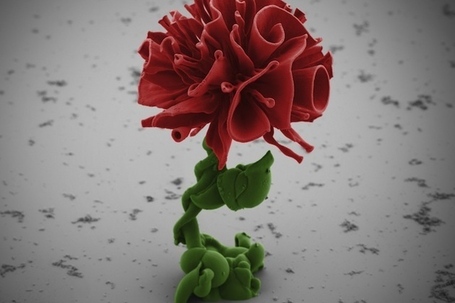 The images above aren't a perfect representation of the crystals — they've been artificially colored to accentuate the complexity of the structures. In reality the images, which were shot through an electron microscope, are black and white. They're not quite as visually arresting, but the sheer scale of the field of fungi-like structures disappearing into the distance, pictured below, is breathtaking. 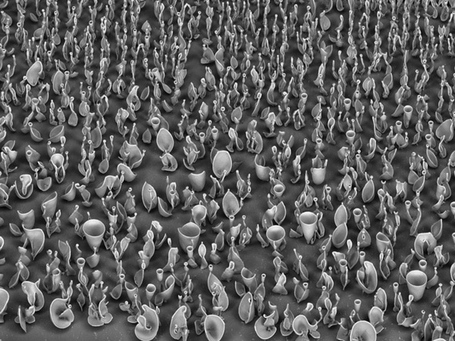