At the D11 conference today, Regina Dugan, SVP for advanced technology and projects at Motorola, showed off some advanced projects. The first was a prototype electronic tattoo on her arm from MC10, about which she quipped "teenagers might not want to wear a watch, but you can be sure they'll wear a tattoo just to piss off their parents."

The second technology was even wilder: a pill from Proteus Digital Health that you can swallow and which is then powered by the acid in your stomach. Once ingested, it creates an 18-bit signal in your body — and thereby makes your entire person an "authentication token." Dugan called it "vitamin authentication." Motorola CEO Dennis Woodside, who earlier confirmed the Moto X phone, added that the Proteus pill was approved by the FDA. 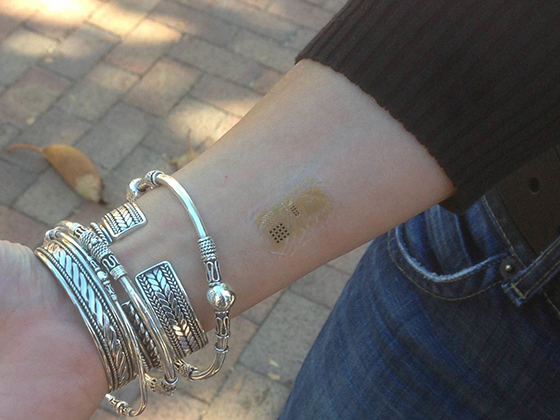 "I got to do some epic shit when I was at DARPA."

The broader context for these prototypes is that Motorola, like Apple, is thinking about wearable technology. "There are a lot of problems in wearables," Dugan said, "Electronics are boxy and rigid, humans are curvy and soft. That's a mechanical mismatch problem." Dugan is no stranger to forward-looking technology, having come to Motorola after a stint as Director of DARPA and then at Google. She believes this experience is important for Motorola, because too many companies are thinking too small, "The strategy these companies use for radical innovation is decades out of date. We need to update it. We learned to do it at DARPA and we're going to bring it to mobile, and it will have cascading effect on industry."