UNICEF has launched a bold advertising campaign that takes direct aim at perhaps the most ubiquitous form of online activism — the Facebook "like." Late last month, UNICEF Sweden released three commercials that urge viewers to support humanitarian aid not through posts or shares on social media, but monetary donations. The Swedish-language spots each present different variations on this theme, but by far the most harrowing stars a 10-year-old orphan speaking directly to the camera from inside a dark and decrepit room.

"Sometimes I worry that I will get sick, like my mom got sick," the child says in the captioned ad, his brother playing in the background. "But I think everything will be alright. Today, UNICEF Sweden has 177,000 likes on Facebook."

The other two ads, also in Swedish, take a relatively more lighthearted approach to the question of online activism, though they underscore the same point: Facebook likes aren't treated as currency in other commercial venues, so they shouldn't be equated with charitable donations. In one, a portly westerner pays for his beers in likes; in the other, a man tells a confused sales clerk that he'd like to purchase a cashmere sweater in social currency. Each ends with the same tag line: "Vaccine[s] can't be bought with likes either."

The campaign, created by ad agency Forsman & Bodenfors, takes a rather bold stance against the awareness campaigns that often spread across Facebook and other social media platforms. UNICEF officials acknowledge that such efforts can help introduce issues to a wider audience, though they fear that for most users, the action stops with the click of a button. To further stress this point, UNICEF Sweden released a bold poster alongside the video clips, saying that every like it receives on Facebook will result in exactly zero vaccinations.

"We like likes, and social media could be a good first step to get involved, but it cannot stop there," Petra Hallebrant, UNICEF Sweden's director of communications, told The Atlantic. "Likes don't save children's lives. We need money to buy vaccines for instance." 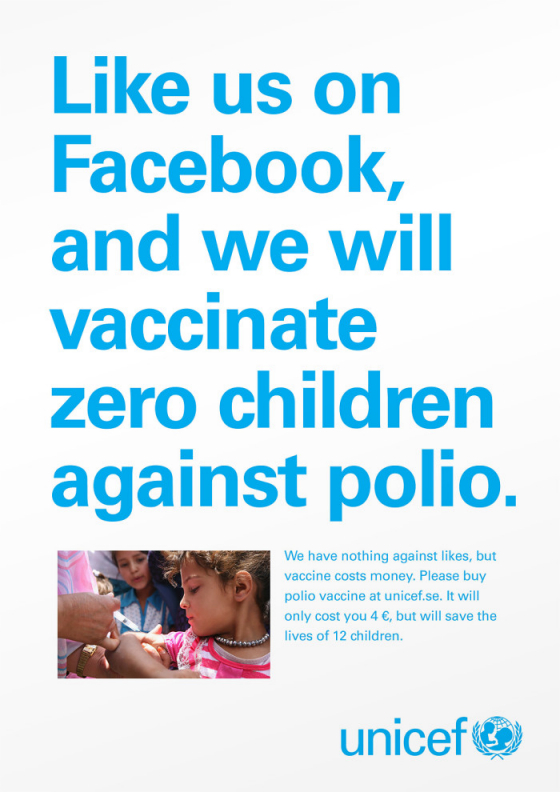