The world's first gun made up almost entirely of 3D-printed components has been created, Forbes reports. The firearm, called the "Liberator," is a small pistol-like weapon that can shoot various types of handgun bullets through several interchangeable plastic barrels. It's still a prototype for now and reportedly has not been tested — yet. But that's coming soon, according to its creators at Defense Distributed, an Austin, Texas-based collective of gun access advocates led by crypto-anarchist Cody Wilson. The group told Forbes that once the gun has been tested and proven to be functional, they will publish the digital blueprints for it on their website, Defcad.org, allowing anyone to make it. 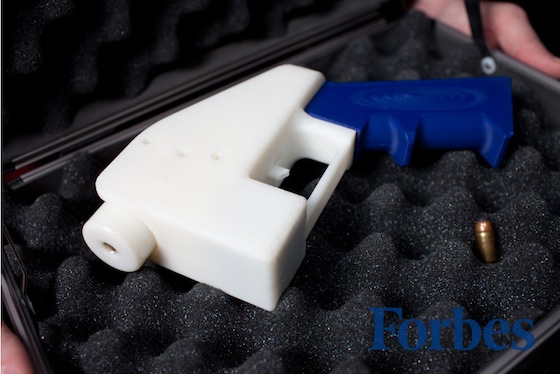 made up of 16 different pieces of plastic

Wilson has stated for some time now that it is Defense Distributed's goal to create the first "100 percent 3D-printed gun," as an effort to undermine gun laws and restrictions, and the very idea of intellectual property itself. If the new gun functions as Wilson and his collaborators intend, and if they do release the files online for anyone to download as planned, it will likely challenge the effectiveness of some firearm laws. A congressman from New York state has called for national legislation to ban 3D-printed guns specifically, but his bill has not moved forward.

As for the new prototype gun from Defense Distributed, it's worth pointing out that it is not actually 100 percent 3D printed. Instead, it's made up of 16 different pieces of plastic and contains two other non-3D-printed parts: a metal nail used as a firing pin and a steel block added so that it sets off metal detectors, a necessary requirement for it to stay legal under the US Undetectable Firearms Act. We've reached out to Defense Distributed for more information on when they plan to fire the weapon and publish the files online and will update when we hear back.