Share All sharing options for: Nvidia's new GPUs promise to take your laptop gaming to 1080p and beyond

Say hello to the Nvidia GeForce GTX 780M, the latest graphics chip to claim the title of "world's fastest notebook GPU." It's one of a quartet of new Kepler graphics cards that Nvidia is introducing today — the others being the GTX 760M, 765M, and 770M — all of which are said to be at least 30 percent faster than their last-generation counterparts.

What that means in practical terms is that so long as your shiny new laptop has a GTX 700M-series GPU inside it, you should be able to game away quite happily at the popular 1920 x 1080 resolution. The performance difference between the four new models will mostly be felt in the amount of extra graphical frills you can enable at that resolution. That being said, the flagship 780M can be configured with up to 4GB of GDDR5 and 1,536 CUDA cores, potentially allowing you to step up into even higher resolutions. 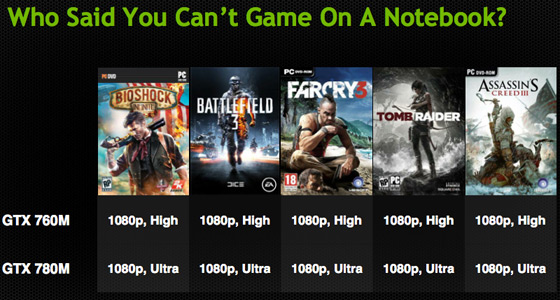 Before you start dreaming of a high-res ultrabook like the Toshiba Kirabook exploiting one of these chips, it's worth noting that Nvidia's new hardware is destined primarily for bulkier machines in the 14- to 18-inch display range. Even though the company anticipates this new generation of computers to be thinner and lighter, the basic power and cooling requirements of a high-end graphics chip mean you won't be looking at the sveltest possible laptop.

Computex 2013 is set to kick off in Taipei next week, which is when we can expect Intel to finally lift the veil of secrecy from around its Haswell CPUs, opening up the floodgates for a deluge of new laptops. Nvidia's new GTX range is sure to figure prominently among them, so anyone considering an imminent upgrade would be well advised to soak in the Computex news before making a final decision. 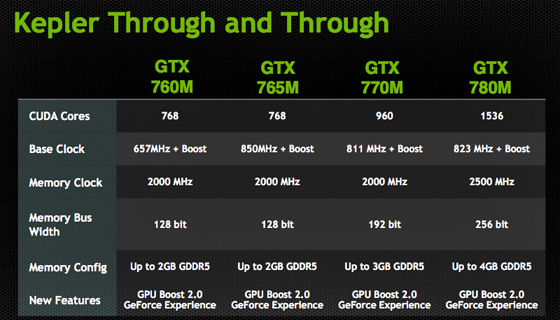