Ever since Google announced that it would be sending its Reader service out to pasture on July 1st, there has been a gold rush of replacement RSS readers coming to the surface. Many of the better options, such as Feedly or NewsBlur, have catered to the hardcore, RSS-consuming reader that follows a number of blogs posting many articles a day. These users primarily value speed and efficiency over visual aesthetics (though, both Feedly and Newsblur have put in efforts to improve their appearances).

Bloglovin', an RSS aggregator that has been around since 2008, is taking a different tack: Its goal is to attract the casual consumer that's more interested in fashion and lifestyle blogs than straight technology, politics, sports, or science news. To better reach and serve those readers, Bloglovin' is launching iPad and redesigned Android apps to accompany its existing iPhone and web apps. 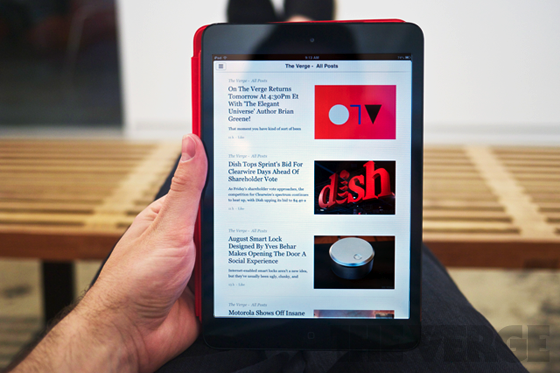 Just a couple of weeks ago, Bloglovin' launched a major redesign of its web app, with a focus on suggesting content and articles for the casual passerby that doesn't bother signing in to the site. Since that Tumblr-meets-Pinterest redesign, Bloglovin' CEO Mattias Swenson tells me that over 500,000 new users have joined the service in a matter of 10 days. And most of those users are women — in fact, Swenson says that 90 percent of its over 5 million active users are female. That demographic is painfully obvious when you first visit the site or open the apps: All of the recommended sites to follow are either fashion- or lifestyle-focused — think The Sartorialist and Cupcakes and Cashmere instead of Politico and Wired (though you can search for and add sites from a variety of topics or import your existing Google Reader subscriptions).

90 percent of Bloglovin' users are female

Because Bloglovin' has this demographic, and is actively catering to the "lifestyle" crowd, its mobile apps are designed with a focus on images and casual consumption, as opposed to densely packed article lists. Articles are laid out with their images highlighted and plenty of white space between them. Tapping into an article displays it neatly formatted for mobile, and there are the usual sharing options available. While Bloglovin' doesn't have the flashy animations of Flipboard, it's layout and feel has a similar, casual consumption vibe. On the iPad, Bloglovin' made it so just a minor flick of your thumb initiates a significant scroll, eliminating the need to constantly scroll while you read. The mobile apps also sync read states with the web app, so you aren't stuck reading the same article twice.

When it came to Android, Swenson said that the company had noticed a large uptick in users visiting the Bloglovin' web app from within Android browsers. "We realized that we had to be on Android," said the CEO. He also noted that many of Bloglovin's target users were using Android phones because of their larger displays. These displays make it easier to view images and multimedia content — which Bloglovin' takes advantage of with its magazine-style formatting of blog posts.

"We think that there is room for more than one reader on the market."

Swenson says that Bloglovin' users tend to open the app four times a day and spend about four minutes within it each time it's opened. Most of the fashion and lifestyle blogs that its users follow may post only a handful of times a week, as opposed to a news junkie who might follow multiple sites that update dozens of times a day. These different use cases are what Bloglovin' hopes will set it apart from the maelstrom of Google Reader replacements available now. "We think that there is room for more than one type of reader on the market," says Swenson. For Bloglovin's sake, there had better be: As a Betaworks funded company, Bloglovin' shares investors and even office space with Digg, which is planning to launch its own RSS reader next month.

Bloglovin's apps and service are available for free, as opposed to the freemium and subscription models that many of its competitors are offering. The company's business model is advertising-based — it will insert ads and promoted content in between articles within its main list view. Swenson says the goal is to provide the type of targeted advertising that one sees in high-end fashion magazines — quality ads that are nearly as engaging as the content surrounding them.

Looking forward, Swenson says that Bloglovin' plans to expand the social sharing and recommendation features within its apps. Right now, users can "like" articles they read, which can then be viewed by other users of the service. User profiles also show what sites a person follows (there are privacy options if you want to keep certain unorthodox sites hidden from view), letting new users quickly find more content to follow. It's very similar to Google Reader's beloved old social features that were eventually killed in favor of Google+ integration. "We want everyone on Bloglovin' to become curators of great content," says Swenson. Bloglovin' is still a ways out from achieving that, but the foundation has been laid.

"We want everyone on Bloglovin' to be curators of great content."

As we get closer and closer to Google Reader's July 1st demise, we'll likely see more and more RSS and aggregator options coming out of the woodwork. The Google Reader die-hards may have already picked their next move, but Bloglovin' hopes to be able to capture the mainstream audience that was never really enthralled with Google Reader. "90 percent of our users will be casual visitors just looking to see what's popular," says Swenson, "while 10 percent will be heavy-duty users."