Atheer takes on Google Glass, conjures up a virtual tablet you control with 3D gestures

Share All sharing options for: Atheer takes on Google Glass, conjures up a virtual tablet you control with 3D gestures

Atheer, a tiny startup in Mountain View, California, is literally surrounded by Google. It's a block away from Google's HQ, with Google buildings all around. And yet, right under Google's nose, the company's building a device that's a lot like Google Glass: an augmented reality headset that actually uses Android to display its applications.

"People don't want to sit in front of a computer anymore."

The big difference is this: Where Google Glass is trying to display a limited array of useful information in your peripheral vision, Atheer wants to give you a full tablet experience that you can just reach out and interact with. "People don't want to sit in front of a computer anymore, they don't want to be stuck in a room," explains company founder Sleiman Itani. Where Google Glass has a single tiny screen, Atheer puts transparent displays in front of both your eyes, giving you an interface that actually appears to float in front of you in 3D space, and next to those displays are a pair of cameras that let you interact with it as well. Google Earth could actually be a three-dimensional globe that floats in front of you, one that you just reach out and spin. You could interact with Kinect-like games in 3D as well, ones that no one but you would be able to see. Using motion tracking, you'd be able to move your head around to see different parts of a larger virtual reality, by "scrolling" with your motion. And when you're done with an application, you just spread out your fingers into a flat hand, and the gesture recognition software brings you back to the main menu.

And though such 3D apps, designed for such gear, are optimal, Atheer believes the key to success is backwards compatibility with existing app platforms. The company claims that it's built a software stack that can integrate into any operating system (it's working with Android now) such that at minimum, you'd be interacting with existing two-dimensional Android apps running on a virtual 3D tablet hanging in the air in front of you. 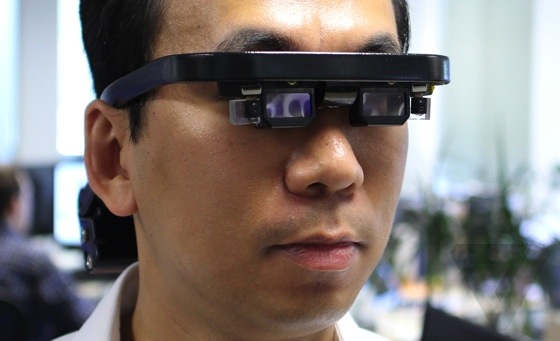 That's the dream, anyhow, because the demo I actually saw at Atheer HQ was perhaps as rudimentary and unpolished as I've ever seen. The company also wouldn't let me try on an actual wearable headset, only a pair of frames attached to a tripod plugged into the wall. The software was full of placeholders, many of them merely representations of the experiences the company would like to enable, the motion tracking felt laggy, and the hardware appeared to be hastily pieced together from a pastiche of existing off-the-shelf gear, despite the fact that the company claims it's been working on this technology for about a year and a half now. Atheer didn't have any popular existing 2D apps to show me, leaving the claim of backwards compatibility unproven. When I asked Itani if his company truly wanted to build the experience, or just license the platform out to other companies, he couldn't say, though he did confirm that the company will build all-custom hardware for the next iteration.

Perhaps Atheer is merely hoping to get snapped up by a company like Google, selling off its intellectual property and expertise. The company certainly claims it's got a number of patented and patent-pending processes for natural interaction and the like, though it declined to provide any patent numbers and the US Patent and Trademark Office has no patents on record assigned to the company. Atheer does have an optometrist and vision scientist, though, Sina Fateh, who has a number of patents on file, many of them attributed to one of his prior companies, Vega Vista, which attempted to commercialize natural interaction for PDAs in the early 2000s. When I asked the company what Atheer uniquely brings to the table beyond its dream, they appeared to map well to his area of expertise: "retinal mapping," "vision optimization," and "personalized ergonomics," as well as motion control.

Perhaps Google could use a new optometrist on the team?