In addition to widening the reach of its Supercharger network (as CEO Elon Musk outlined last night), Tesla also plans to notch up the amount of power each Supercharger station is capable of producing. During a conference call this afternoon, the company said it's been working to improve the technology behind the Superchargers to cut down on the amount of charging time required to get Model S drivers back on the road. Specifically, Tesla says its latest enhancements allow the Model S to be charged at 120 kilowatts — up from 90 kilowatts. But what does that mean for owners? Approximately three hours of driving time can be replenished in just 20 minutes once the boosted Superchargers — now in beta — become commonplace throughout the US later this summer. 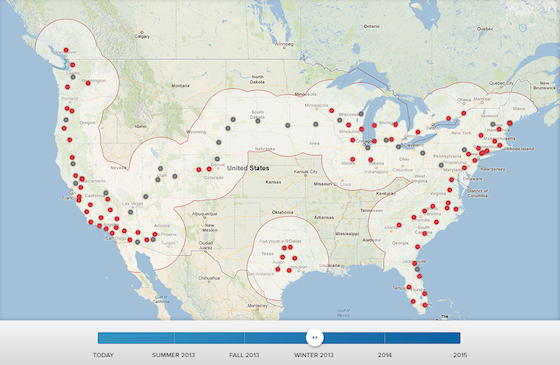 Tesla also revealed specifics behind its ambitious Supercharger deployment. Within the next six months, the automaker says the chargers will "connect most metro areas" in the United States and Canada. That includes new charging stations in Arizona, Texas, Florida, and the midwest. Once that stage of the rollout is complete, Tesla says it will be possible to drive (diagonally) across the US from Los Angeles to New York. "On well-traveled routes, there'll be a supercharger probably every 80 to 100 miles," Musk said during the call. One year from today, Tesla has vowed that Superchargers will cover "almost the entire population" of North America.