Nexus movement: what smartwatches can learn from Seiko

Nexus movement: what smartwatches can learn from Seiko

Wearables could get buried if Google and Microsoft don't step up

A dual-language day and date window, a sweeping second hand, a crown at the 3-o’clock position. Starting from a small handful of common characteristics, a company like Swatch, Seiko, Breitling, or Bell & Ross can produce literally dozens of models of wristwatches, each as unique as its owner. Dials and hands change; one model might be 18-karat gold while another is stainless steel. But underneath, they’re all powered by an identical movement — a set of miniature gears, springs, and counterweights that keeps time. Considering how complex these marvels of the industrial age can be, it’s no wonder that a watchmaker would want to reuse them as liberally as possible.

Modular design is a principle that any reasonable industrial engineer holds dear. If I’m making 100 styles of watches, designing 100 different labyrinthian Antikythera mechanisms to underpin them will simply destroy my business (if it even gets off the ground in the first place). I need to be able to satisfy my entire range with perhaps 10 different movements, fewer if possible.

But with smartwatches, the need for "movements" is a hundred times as pressing.

For all practical purposes, the "smartwatch market" is a market that doesn’t exist yet, and can ill afford to divide developers’ already deeply divided attentions amongst a half-dozen brand-new development platforms. Pebble, the wildly-successful Kickstarter project that has emerged as the young industry’s flagbearer, appears to enjoy a vibrant developer community and has scored some big-name partnerships with popular apps like RunKeeper, but there’s a big problem: the Pebble, for all its publicity and support, is an unattractive watch made with cheap materials. What if Pebble focused its efforts not on the art of creating a beautiful piece of jewelry, and instead poured 100 percent of its energy into creating a platform, a publicly available software development kit, and watch guts that more proficient watchmakers could take and run with?

For all practical purposes, the "smartwatch market" is a market that doesn’t exist yet

This very briefly started happening in the early part of the last decade, when Microsoft’s so-called Smart Personal Objects Technology (SPOT) platform found its way into watches from Swatch, Tissot (a Swatch subsidiary), Suunto, and Fossil’s now-defunct Abacus brand. A consumer could decide they wanted a smartwatch, then choose from a variety of styles from different well-known makers — all of whom had applied their unique touches. The Swatches were colorful and playful; the Tissot could pass as a high-end piece of fine jewelry (almost). Everything was underpinned by a common framework, developed and promoted by an industry giant with the money and visibility to get the word out.

Unfortunately, SPOT was ahead of its time: Microsoft had bet on delivering information to wrists over signals delivered via FM radio right around the time that the smartphone revolution was picking up steam. SPOT was dead on arrival, and today, there’s no equivalent. Companies like Pebble and MetaWatch are too busy trying to get their businesses off the ground with their own watches — designed in-house — to put much time, effort, or thought into evangelizing the smartwatch concept in general.

What Google and Microsoft have done for smartphones, they need to do again for smartwatches

MetaWatch is actually very open about its platform, but it’s not MetaWatch we need to promote such a concept — it’s a heavyweight. What Google and Microsoft have done for smartphones, they need to do again for smartwatches. We need bona fide platforms that OEMs — with their decades of hardware and design expertise — can target. In a perfect world, some of those "OEMs" would include real watchmakers. A Timex, a Citizen, a Breitling.

After comments from Apple’s Tim Cook and Google’s Sundar Pichai this week at D11, there’s little doubt that a major push on wearables — smartwatches included — is coming. Apple won’t offer outside hardware vendors a shot at producing "iWatch"-based smartwatches, of course; that’s against every tenet in Steve Jobs’ playbook. That’s where Google and Microsoft come in. 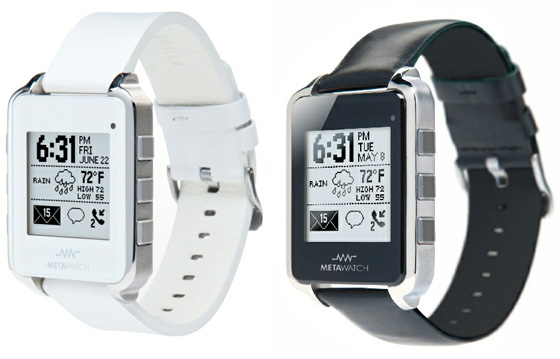 "I look at where computing is going, and we're trying to think about where it's going in the next five years and prepare Android for that. For a range of screen sizes, people are going to be wearing watches, we're experimenting with Glass, we're adding sensors as fast as we can," Pichai said on the D11 stage. Indeed, a heavily-modified and specialized version of Android would be a good fit for a smartwatch — Google Glass is doing the same — and would make for a gentle learning curve for hardware makers who’ve already been dealing with the platform for years.

Yes, Google can (and probably will) make its own smartwatch, either as a Nexus device or through its Motorola subsidiary. But just as the Nexus program has had little impact on the smartphone industry, a Nexus watch could find itself in the same boat. Watches — perhaps even more than phones — are intimately personal objects: their shape, material, and color are always visible to those around you. They broadcast a little something about who you are. A single smartwatch model from any vendor, no matter how proficient at creating hardware, is incapable of becoming that kind of personality extension.

Watches — perhaps even more than phones — are intimately personal objects

I’m not suggesting a single model can’t be successful; any Apple entry, for instance, has an excellent chance of selling big. Unfortunately, that’s not a win for wristwatches so much as it is a win for simply getting electronics on the wrist. But if a Google- or Microsoft-promoted smartwatch platform — a standardized "movement" — can be even half as successful as Android has been on phones, this is going to be a fun and exciting time to be a watch enthusiast.