What happens when you re-think everything about laptop design?

I think I'm going blind. I've never had glasses, and always kind of liked being the guy with perfect vision, but I'm pretty sure I'm going blind. Ten times a day I catch myself craning my neck toward my laptop screen because a website's text is too small, and is that an I or an L? It's worrisome.

But for the last couple of weeks, instead of leaning in toward my laptop I just brought my laptop to me. I've been using the Acer Aspire R7, the Windows 8 laptop that has a "floating touchscreen" that can be twisted, spun, flipped, and moved every which way. It's quirky, and weird, and in more ways than one looks like nothing I've ever seen. It's been fantastic for my neck over the last couple of weeks, but is it a great machine? Acer's rethinking some of the core design points of a PC — a bold move, to be sure, but a good one? Let's see.

Who knew hinges could ever be exciting technology? I mean, they're hinges. Yet here we are. The Lenovo Yoga and its hyper-flexible hinge are already one of my favorite Windows 8 devices, and the R7 takes things even further. Acer is a new "Ezel" hinge (pronounced like "easel" but spelled wrong like any good marketing term) to let the R7 shapeshift in some wild ways.

There are four official modes in which you're supposed to operate the R7. There's Notebook mode, which looks more or less like a normal laptop. There's also Display mode, where you flip the screen 180 degrees and point it away from the keyboard – it's for presentations, or demos, or pretending the R7 is a tablet. Pad Mode flips the screen over and then folds it back down on top of the keyboard, as if you've closed the laptop but the screen is on the outside. It props up at a slight angle, and works great for drawing or resting on your lap. The fourth mode is Ezel mode: You grab the screen and pull it toward you, and either prop it up right behind the keyboard or leave it floating above the tray. I loved Ezel mode when I was writing — it brings the screen much closer to your face, and feels more intimate and immersive somehow. You're basically using a tablet with a keyboard dock at that point, though.

Who knew hinges WERE such cool, innovative technology? 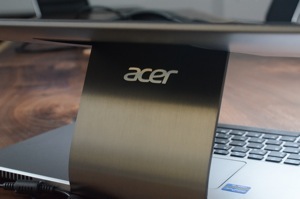 Half the fun of using the R7 is just messing with the screen. The hinge is stiff enough to keep the screen in place at almost any angle (which does make the R7 hard to open), though it'll wobble if you press too hard on the touchscreen. I wound up using it most with the screen propped above and parallel to the keyboard and trackpad, a setup Acer has dubbed "the Starship Enterprise." It's great for when you're standing — it feels like you're using a keyboard tray underneath your screen, and when you're standing over the computer while cooking or working at a standing desk, it prevents you from having to shove the screen all the way back just to be able to see it.

The hinge gymnastics only really work because the R7's display is so good. It's a 15.6-inch 1080p panel with 10 fingers of multitouch support, and it's accurate and vivid from any angle – viewing angles are crucial on a device you'll use in so many configurations, and Acer gets it right here. The screen is also blindingly bright, with 40 percent brightness more than serving my needs.

Acer tweaked the transformer / convertible formula to great effect here, and as much as it's a gimmick it's a really fun one. But it comes on the wrong kind of computer. 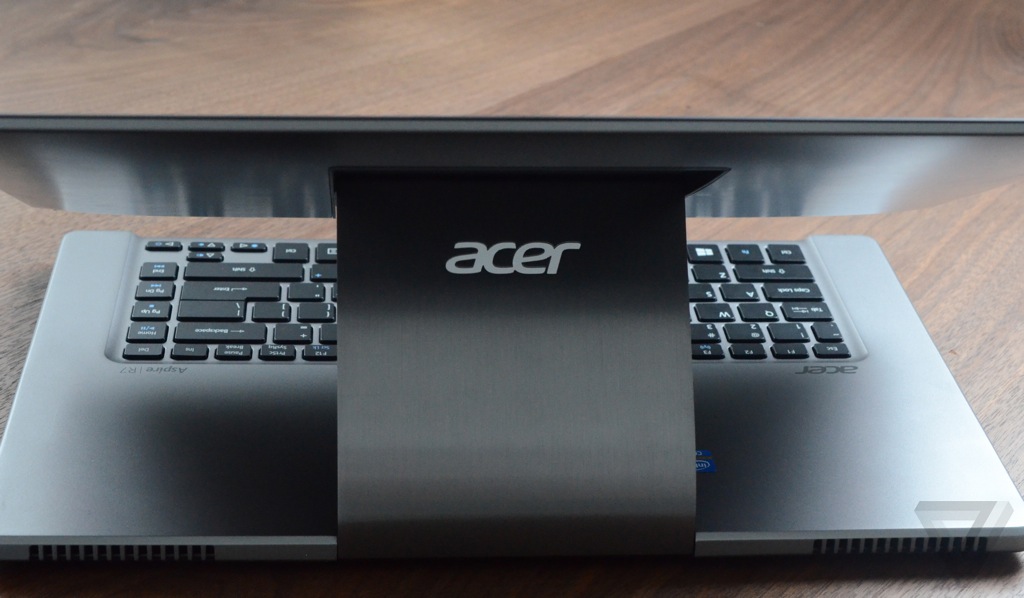 The R7 is remarkably sturdy and well-constructed, with nary a seam or awkward edge to be found. It's a matte, glistening silver all over, save for a spot in the center of the lid that looks and feels like the surface that holds your drink on your car's dashboard. It's not unattractive by any means, but neither does it really look like a laptop. It's all lips and ridges and angles, from the slight underbite at the back to the way the hinge almost looks like a handle for the laptop. I found myself wanting to throw it around like Captain America's shield, using it like a futuristic weapon. I can't explain why — it just happened.

Ports and buttons line both sides of the R7. There's a power button, SD card slot, volume rocker, and USB 2.0 port on the right edge; two USB 3.0 ports sit on the left, along with DisplayPort and headphone jacks. This is the first laptop I've used in a while that seems like it ought to have an optical drive — it's so media-friendly otherwise, and there's plenty of thickness to spare — but sadly there's none to be found. Two fans shoot hot air out the back of the device, and four speakers pump audio from the bottom. The speakers are remarkably good, actually, with Dolby-optimized sound that's bigger and fuller than I've come to expect from a laptop. For once I didn't mind not having external speakers.

Acer's making big moves at the top of the laptop market, and from the S7 to the R7 has shown an incredible knack for the finer details of the device. Unlike many Windows products, which have great aspirations and weak follow-through, the R7 executes its vision remarkably well.

It's just the wrong vision. 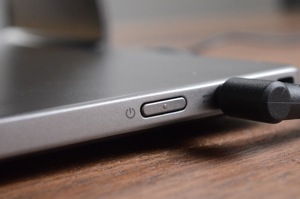 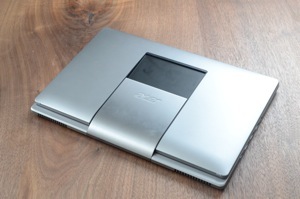 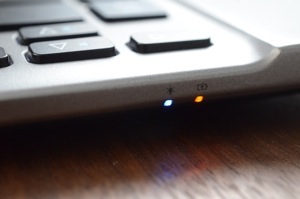 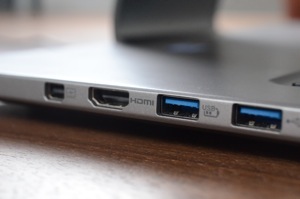 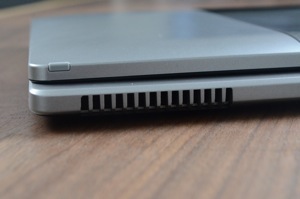 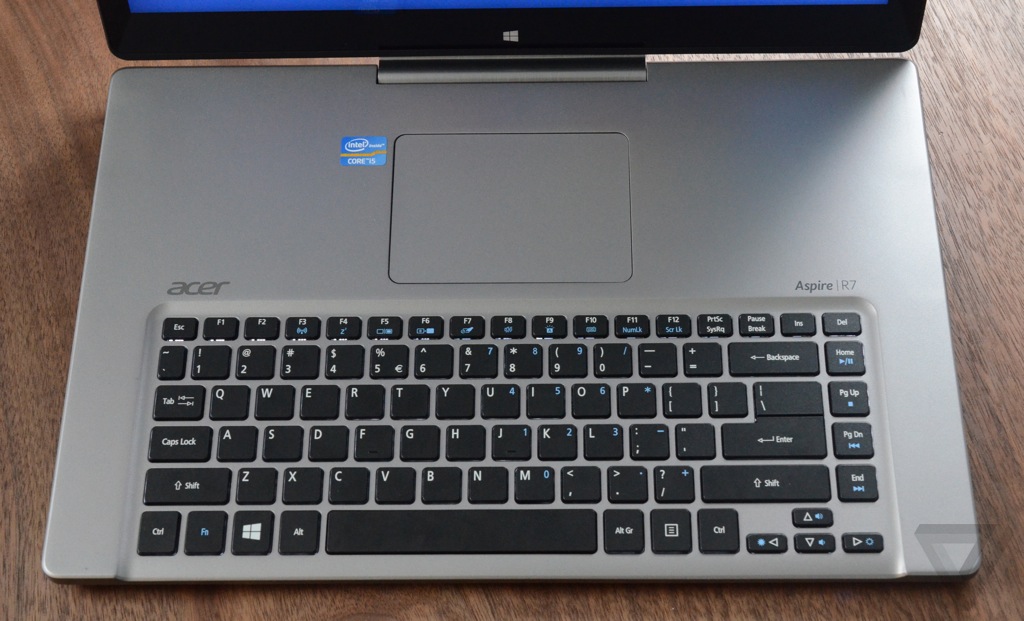 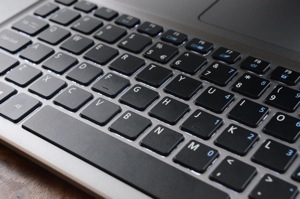 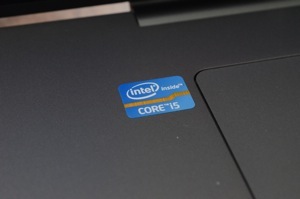 We pretty much already got the keyboard layout right already 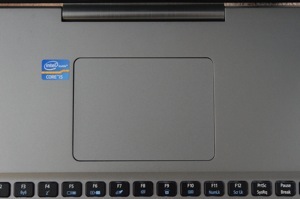 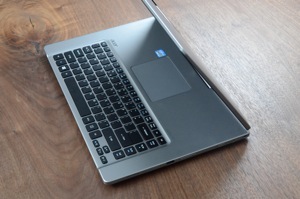 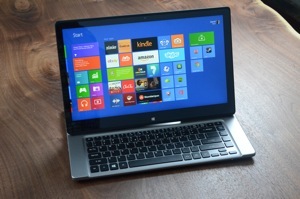 I can't look at the R7 without thinking of its odd Star Trek Into Darkness tie-in, and in a way that's fitting: This device does feel like something from the future. Maybe even from an alternate universe, where a butterfly flapped its wings differently and created an alternate timeline. In this parallel world up is down and down is up, and the keyboard and trackpad have been switched around on your laptop.

I wondered why Acer would have swapped the two on the R7: Was I holding it wrong? Was someone drunk at the factory? Turns out it's neither. It's just that Acer doesn't think you'll need the touchpad — the screen often either floats above it or covers it entirely, so you have to slide your hands underneath just to mouse around.

The R7 eventually settled into my life as something like a portable all-in-one. I'd use an external mouse (which I had to buy) when I was at my desk, and use the touchscreen in a pinch — though it's so big and heavy that I only moved it when absolutely necessary. In the latter case, though, Windows is still way too mouse-reliant for this idea to work. And in the former, it's just annoying to use an external mouse all the time.

Acer says its research showed that most people use external mice, and the company's killing the trackpad in favor of external devices, and especially the touchscreen. But if that research is true — and I don't think it is — why not actually just kill the touchpad? Acer says it's excited about bringing the Ezel hinge to other devices, and one of them should definitely be 24 inches or so, when an external mouse becomes a no-brainer. As it is, I feel like I'm using an awkward tweener device that's not even designed to be useful as a laptop.

Plus, palmrests exist for a reason. As it is I have to perch my hands above the keyboard to use the trackpad, or angle them upward just to reach the keys — either way it's uncomfortable and either way I'm pretty sure I'm getting carpal tunnel. The keyboard itself is pretty good, with keys that look and feel a lot like the square Apple chiclet keys — they're the tiniest bit mushy, but I picked up the R7 without any learning curve at all. Well, except for the whole "the trackpad is nowhere near where I expect it to be" thing. Even the trackpad is fine, a little jumpy but mostly usable — it's just that using it is a horrible and uncomfortable mess.

Points to Acer for trying, and there's a lot here the company can build on. I love the Ezel hinge, and all the insane ways it lets you use the computer — the R7 is if nothing else a really fun device to show people. And maybe Acer's right that someday we'll all just use touchscreens to get all our work done. Maybe someday the trackpads on our laptops will simply be vestiges of a bygone era. But today is not that day. 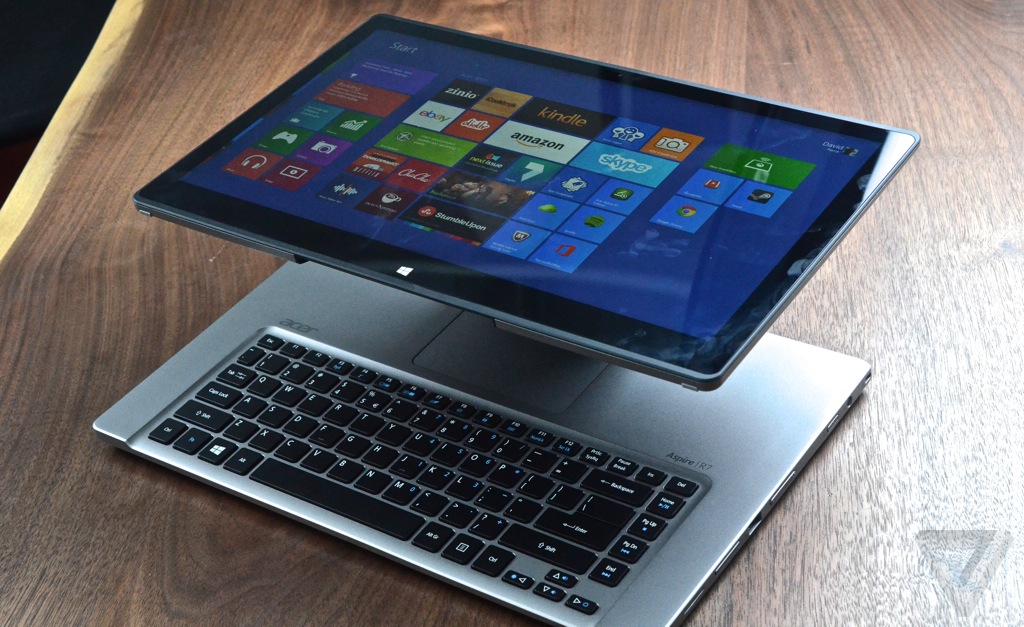 Flashy, but only skin deep

Inside the wild, crazy, weird body of the Aspire R7 runs a fairly vanilla version of Windows 8. Acer preloads about a dozen apps, including the popup-inducing Norton Antivirus, plus third party apps like Netflix, Ebay, and the unfortunately-named Didlr. All can be removed easily enough, and as usual they're crowded into a single section of the Start screen called "Acer apps."

It's all powered by a 1.8GHz Core i5 processor, 6GB of RAM, and a hybrid hard drive — 20GB of solid-state storage, which makes booting and resuming fast, plus a 500GB spinning disk. The specs aren't remarkable, but Acer actually apportioned power well; most apps don't require a lot of processing power, but multitaskers need a lot of RAM, and 6GB is a lot of RAM. For basic tasks, it works fine, though I did notice a few more stutters and slightly longer loading times than I'd expect to see on a higher-end laptop. Gaming's basically impossible, of course, thanks to the integrated graphics.

OTHER THAN THE HARDWARE, EVERYTHING ABOUT THE R7 IS DECIDEDLY AVERAGE

It all runs fairly cool, though it does get a bit noisy as the R7 spits its hot air out the back. Gaming will heat the chassis a little, as will the occasional four-dozen-browser-tab extravaganza, but for the most part it's fine. It boots and resumes quickly, though the power button is oddly unresponsive sometimes — it can take a couple of seconds before anything happens, though once it gets going it's fully booted in only about 10 seconds. That's not the button's only problem, either — since it's mounted on the side it's way too accessible, and the R7 had a nasty habit of turning on in my bag, lid closed and all, and draining the battery.

Battery life is decidedly average, like so many things about the R7's performance. It lasted 4 hours and 20 minutes on the Verge Battery Test, which cycles through a series of popular websites and high-res images at 60 percent brightness. That's a mediocre score, and lower than I'd expect — given the size and heft of the R7 I figured there had to be battery to spare.

Maybe the look of the future, but not of the present

In a fit of late-night frustration, I picked the R7 up, held it aloft, and shouted at it: "WHAT ARE YOU?!" I still don't know. It's too big and cumbersome to be a really useful laptop — even for a 15-inch device it's pretty enormous. But it's too small to be an all-in-one, and not powerful enough to really qualify as a desktop or desktop replacement.

And let's not mince words: any appeal it did have died for me the first time I typed "kliojnm" while trying to move the mouse around the screen.

The Ezel hinge is cool, there's no question, and I could see myself using a laptop in some of the ways it allows. I'd also love an all-in-one that was this flexible. But I'm not ready to give up the trackpad, and neither is Windows. Until Acer figures out how to make a crazy laptop that's also a normal laptop, I'm not interested.