A number of design firms have drawn up plans for new a Penn Station and Madison Square Garden as part of campaign to rebuild the complex. Renowned studios SHoP Architects, Skidmore, Owings & Merrill (SOM), Diller Scofidio + Renfro, and H3 were all asked to re-imagine the New York landmarks by the Municipal Art Society (MAS), a nonprofit that campaigns for, among other things, intelligent urban design and planning.

The most radical proposals came from Diller Sofidio + Renfro and SOM, who both submitted wildly complex designs. Diller Scofido + Renfro's "Penn Station 3.0" aims to serve "commuters, office workers, fabricators, shoppers, foodies, culture seekers, and urban explorers," with a multi-level complex that's topped by a rooftop public garden. The concept separates out the fast-moving commuters, who are confined to the lowest level, and adds layers of stores, cafes, a spa, and even a theatre, in which people are able to move around at a more leisurely pace. The plan would also see Madison Square Garden relocate to sit alongside the Farley building on 8th Avenue. 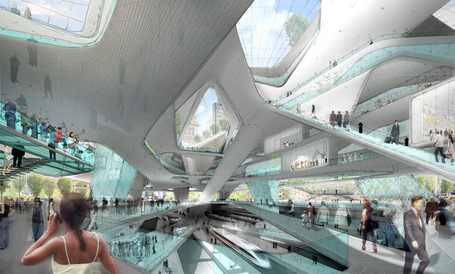 Should SOM's proposal become reality, it would likely become an iconic building in a city not short of landmarks. The architectural juggernaut responsible for One World Trade Center and the Burj Khalifa envisages a four-towered megastructure that would expand Penn Station into a huge green space. The plan moves Madison Square Garden to an adjacent location and places a giant transparent ticket hall at the heart of the complex. SOM is thinking big: The plan would represent a commercial property the size of Rockefeller Center, a public park "four times the size of Bryant Park," a "city of culture larger than the Lincoln Center," and a residential development "the size of Tudor City." 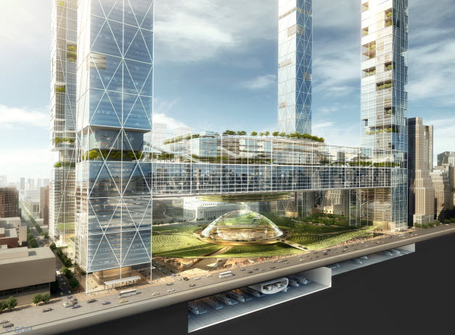 SHoP Architects, which was responsible for the Brooklyn Nets' Barclays Center stadium, presented SOM with "Gotham Gateway." The plan is more modest (and perhaps more realistic) than others, expanding the main hall of Penn Station into what SHoP calls "a bright, airy, and easily navigable space," with the aim of creating a new "destination district" where people would meet socially. It also adds for "significant security and rail capacity improvements," along with new parks, and an extension to the High Line that would connect the new station to an equally-new Madison Square Garden. 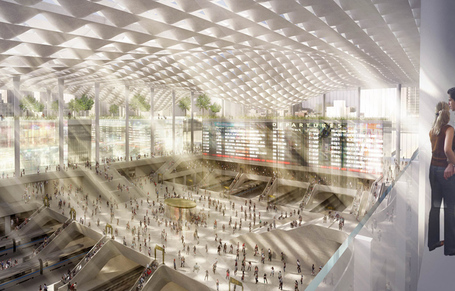