Of all the issues facing the world right now that the US government is concerned about, the sun may seem to be an odd one. But the White House is taking the threat of a massive solar eruption seriously. Late last month, it released a new, largely overlooked report outlining the risks of solar eruptions that strike the Earth — including the potential to cause massive, months-long power outages affecting upwards of 130 million people in the US alone, in one worst-case scenario. Still more troubling, the report — prepared by space weather experts from multiple government agencies — found that while the US is currently equipped with some of the best machinery for monitoring and forecasting such events, budget cuts over the next decade could put the country "at risk of losing critical capabilities that have significant economic and security impacts."

"The potential for the sun to unleash the big one is there."

"The potential for the Sun to unleash the big one is there," said Michael Bonadonna, the report’s lead author and executive secretary for the National Space Weather Program, the agency in charge of coordinating these solar monitoring efforts. "It’s not a question of ‘if?’ but ‘when?’ and ‘are we ready?’"

"The big one," that Bonadonna refers to is an extreme version of a regularly occurring type of solar event known as "coronal mass ejection," or CME, for short. Starting in the Sun’s outer atmosphere (corona), a CME is a powerful blast of billions of tons of solar gas and parts of the Sun’s magnetic field, which fly toward Earth at around a million miles an hour. Such CMEs thin out as they travel through space over days, and by the time they arrive at our planet, most of them go unnoticed, causing only relatively minor disturbances to our planet’s own magnetic field. 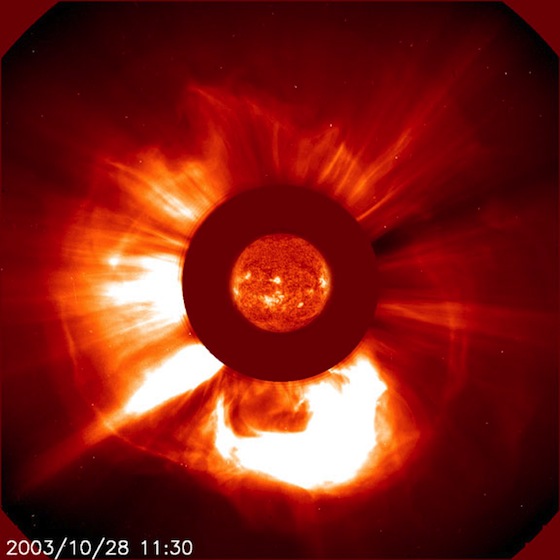 Image of a large coronal mass ejection from the Sun in 2003. (Credit: NASA/ESA SOHO.)

Every 11 years, the sun enters its cyclical period of increased activity called solar maximum, raising the potential for CMEs up to every few days. During this time, there is a heightened chance of especially powerful CMEs with magnetic fields pointed in the opposite direction of Earth’s. When one of these CMEs reaches our planet, it can cause a geomagnetic storm, ripping away part of Earth’s own magnetic field in the atmosphere and rearranging it. These violent storms can last for days, and result in the beautiful sight of the Northern or Southern Lights (auroras), but can also damage several critical technological systems, including GPS, other satellites, airline radio communications and yes, electrical power grids on the ground. As it turns out, the Sun is expected to enter its period of increased activity this year, though so far, it's been a relatively quiet one. 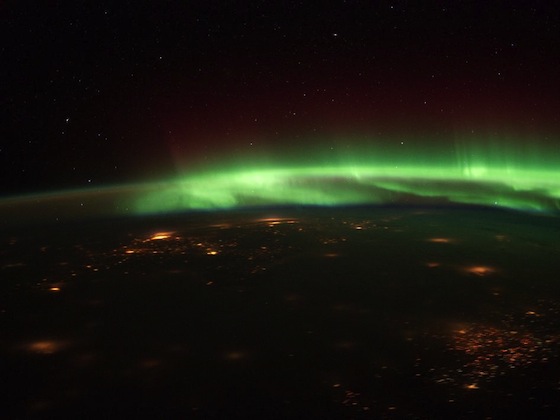 Image of aurora borealis over the Midwest US (credit: NASA).

"Who uses space weather? Almost everyone."

The space weather prediction center at the National Oceanic and Atmospheric Association (NOAA) is in charge of forecasting the intensity of these events, using a scale from G1 to G5 (higher is worse), and warning all of the industries that might be affected. "The fact is, we’re almost at a point where if you ask the question ‘who uses space weather services,’ my answer is almost everyone," said William Murtagh, program coordinator for NOAA’s space prediction weather center, also a coauthor of the new report. Murtagh pointed out that even the pipeline industry was at risk of being affected by solar events because pipelines themselves are electrically conductive.

Murtagh’s job is to deliver space weather warnings, especially those of geomagnetic storms, to other industries in time for them to take action and avoid heavy damage. Because of that information, industries have managed to avoid damage to their systems from the lesser G1 to G4 storms that have occurred over the years. Murtagh said the success of this program explains why even when there are dire reports of solar flares and storms in the mainstream media, they often don't result in any perceivable damage to the public at large. "After the event happens, the media says 'nothing happened. But with space weather, something's always happening." When it comes to the G5, or "great geomagnetic storms," it's unclear that information alone would be enough to mitigate their effects. As Murtagh told The Verge, "We sometimes refer to them as ‘Space Weather Katrinas.’"

"we sometimes refer to them as ‘Space Weather Katrinas.’"

In order to forecast these events well in advance and alert those affected to get out of the way or turn equipment off, space weather experts rely on a long list of specialized instruments on the ground and in the sky, all of which could suffer maintenance issues if their budgets are slashed, as the report notes. But two are of particular importance: the SOHO spacecraft run by NASA and ESA, which contains coronagraphs, instruments capable of imaging the area of the Sun where CMEs are born. The other is a NASA spacecraft called the Advanced Composition Explorer (ACE), which is parked a million miles away from Earth in the direction of the Sun. ACE measures solar wind and can provide an hour’s notice of a CME hitting the Earth. 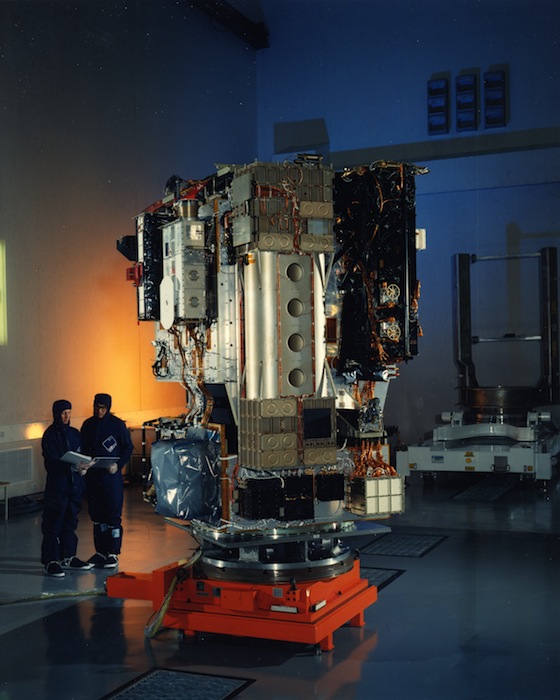 The SOHO spacecraft before its launch in 1995. Credit: NASA/ESA SOHO.

"That’s our warning buoy," Bonadonna said of the ACE spacecraft. "That’s the fire alarm going off saying ‘get out of the house.’" Meanwhile, "if we were to lose that SOHO spacecraft, we lose that ability to forecast geomagnetic storms," Murtagh said. But while both spacecraft have been extremely reliable so far, they were launched in the mid- to late-1990s, and could give out at any time. A replacement spacecraft for ACE called DISCOVR is due to launch in 2014, and while several other craft have already been launched to succeed SOHO, none can provide its full capabilities.

"That’s the fire alarm going off."

Meanwhile, studies have found that while massive geomagnetic storms are rare, they are a real and imminent risk, with as much as a 12 percent chance of one occurring in the next decade, according to some studies. The most recent geomagnetic storm to cause any significant damage to the Earth occurred in 1989, when one knocked out power for nearly the entire province of Quebec, Canada, plunging six million people into darkness for nine hours. For power grids, the danger comes from surges that can overload and permanently damage their equipment. It’s this risk that space weather experts are most worried about. As the new White House-commissioned report notes, potential "consequences on the nation’s power grid are even higher [than other industries], with potential costs of $1-2 trillion that could take up to a decade to completely repair." 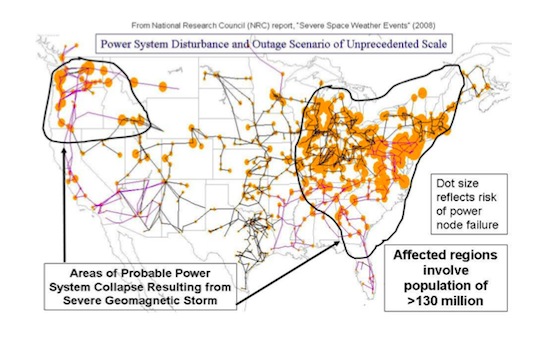 "The power distribution industry runs on a very fine line now," Bonadonna told The Verge. "They need to watch it [solar activity] very closely and make sure it doesn’t become a problem. But they have done a very good job in the last several years of making improvements." Such improvements include systems to harden power grids and make them more resilient against power surges, and to identify which areas are more at risk. As it turns out, not all areas of the world are equally affected by a geomagnetic storm: power stations closer to the poles are at greater risk, as are those located in areas where the surrounding ground minerals are more electrically conductive.

"the consequences would be catastrophic to the nation."

There are two main camps when it comes to how big of risks a geomagnetic storm would pose to power companies . The worst-case scenario was first solidified in a 2008 report funded by NASA. It found that 365 high-voltage transformers out of a total 2,100 could be at risk if the most severe type of geomagnetic storm were to occur. "The conclusion was that the consequences would be catastrophic to the nation," Murtagh said. "There could be power outages extending from New England, down the mid-Atlantic coast, over to Chicago, affecting tens of millions, with recovery measured in months and years." Murtagh said that this 2008 report caught the attention of the White House and lawmakers in Congress, who called for the new report to be drafted.

But a 2011 report from the North American electrical grid industry organization NERC did not agree that there were this many transformers at risk during a massive geomagnetic storm. There may be some attempt to reconcile the difference in opinion soon, at an electrical grid security summit set for May 20th in Washington, DC.

Still, whatever happens, there’s no telling when the next nightmare scenario might strike. It might be a G5 storm on the order of 1989 Quebec, or it might be worse: In 1859, the "Carrington event" was a geomagnetic storm so powerful it caused auroras as far south as Cuba and overloaded the dominant communications system of the time, the telegraph, shocking operators, sending sparks flying and even lighting some small fires. Fast forward 154 years, and the effects of a similarly sized solar storm would be far worse, say Murtagh and Bonadonna. "If you lose dozens of transformers or more and are dealing without power for months or even a year, that’s a totally different challenge to society, to survive an outage like that," Murtagh said.