"OK Glass, get me to the San Jose Airport"

Google's Glass Explorer Edition is finally shipping, and Verge staffers worldwide have been waiting to try out the new headset. So we're sending our editors out to live life with Glass, to explore the brave new world we're lurching into whether we like it or not.

Ten minutes after I was supposed to be at Google HQ, learning how to wear the company's hotly anticipated Glass headset, I found myself stuck in stop-and-go traffic not a mile from the Mountain View campus. Worried that I might miss my only chance to try the tech, I frantically looked through my phone for a number I could call to push back my 9AM appointment, or a way to get around the cars blocking my path. I don't use my phone while actually driving, and even this use, stopped in traffic, set me on edge. "If only I already had Google Glass," I thought, "I could have done this much easier."

More on that in a bit.

When I got to my new 9:30AM appointment, a friendly bearded gentleman named Nathaniel (or was it Andrew? or Alexander?) greeted me inside the newly-designated Glass building on Google's campus. He began grooming me for an extensive one-hour fitting session where, I understood, he'd introduce me to every tiny facet of the hardware and generally make me feel like a citizen of a new era. I didn't have the time to spare, though — I had a 10:25 interview with aerospace and media magnate Sir Richard Branson at the San Jose Airport. I was in a rush. So instead of a long introduction, I decided to test just how easy it is to become a Google cyborg. 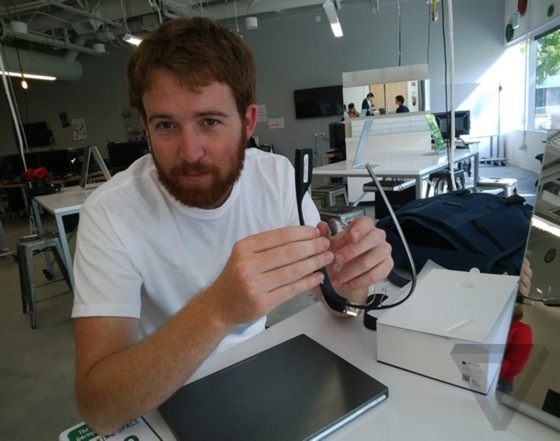 Physically, it's not very hard. You press the power button on the back of the earpiece. You put the glasses on your head. If it's your first time, you then take them off again to adjust the two nosepieces. Then, you rest it on your nose such that the eyepiece is up above your right eye — you won't actually be looking at it unless you glance upwards or tilt your neck down, but that seems to be intentional. Finally, you swivel the eyepiece until you can clearly see a glowing box inside that little glass cube. It only took me about three minutes to adjust the first time, and it fit fairly well from then on. You can also optionally add a special pair of sunglasses to Glass, which snap into the nosebridge.

Getting fitted is quick — setting up takes a bit longer

Then, you tap your right temple, say "OK Glass," and issue a voice command. Easy, no? Only the present version of Glass doesn't actually do anything of value unless you connect it to a Wi-Fi access point or pair it with a smartphone. If I wanted to use it in the car on the way to meet Sir Richard Branson — and, I hoped, to impress him with the hottest new gadget in town — I had to turn my smartphone into a battery-draining portable Wi-Fi hotspot, and pair it over Bluetooth as well. That took quite a few more presses, and a good bit of setup on the phone, though Google tells me that Bluetooth tethering should be sufficient if you have a tethering plan on your mobile account. You can't connect Glass to a password-protected Wi-Fi network, by the way, without using the MyGlass app or a computer to pair, and if you want to call or text anyone you'll have to specifically add a contact from Gmail to Glass on a separate computer before you make a call. 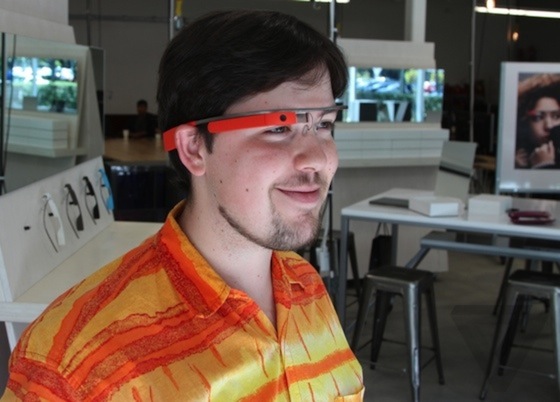 Eventually I was connected, and I spent a few minutes swiping and tapping my way through the touchpad interface. Everything you see in Glass appears as a "card" in a virtual carousel. Starting from the "OK Glass" screen, swiping backwards will only lead you to the settings page, but swiping forwards takes you to every previous interaction you’ve had with Glass, including searches you’ve made, photographs you’ve taken, messages you’ve sent and received, and trips you’ve plotted. Tapping selects one for limited interaction (tapping a photo only allows you to delete or share), and you can cancel actions or turn off the display by swiping down. There’s also a fairly sizable physical button on the corner of the frames that will instantly snap a photo.

After taking a few photos and trying a few quick searches I realized that 20 minutes had passed. Feeling like Captain Picard of the Starship Enterprise, I told Glass to lay in a course for San Jose Airport, cursed myself for forgetting to turn on my phone's GPS, rectified that quickly (again, having to reach for my phone), and took the helm of my aging automobile. Then it was time for a true test of Glass' capabilities on the freeway.

Verizon LTE is plentiful in San Jose, particularly on highways, and I didn't lose my connection on the way. I did, however, come to the realization that Glass isn't yet remotely close to the driver-safe, hands-free computing panacea I'd been dreaming of for years. Taking pictures and 10-second video clips of exactly what I saw on the road is pretty awesome, but feels surprisingly dangerous... You have to look directly at what you’re photographing, so you won’t be getting any safe photographs unless they’re photos of the road. More importantly, Glass' ability to look up important information on the go is extremely thin right now. Googling "Sir Richard Branson" brought up only the barest "oh, that guy" blurb, and other web searches were similarly limited to identifying websites rather than actually reading their content. And that's just the first of many limitations I discovered.

While I loved having turn-by-turn directions from Google Maps navigation floating in my peripheral vision, the display wasn't bright enough for me to see those directions while looking out the windshield of my car. I had to glance up towards the car's ceiling, or place a hand behind the cube to see where I was going. When I realized that I should call Sir Richard's PR agent, it was too late to link her number to Glass, and I wasn't about to whip out my phone at 65 miles per hour. When another person called, I was able to pick up easily enough by tapping Glass at my temple, but the bone-conducting speaker wasn't loud enough to hear over the noise of the car. I had to enunciate extremely clearly and loudly for Glass to interpret my voice searches correctly. And by the time I reached San Jose Airport, less than an hour after I'd arrived at Google that morning, I'd already used up a full third of the headset's battery life.

The other thing I missed on the way to the airport was an email from Sir Richard Branson's agent about a change of plan. He decided to fly out early... roughly about a minute before I got there. "If only I'd hooked up Glass to my personal email account before I left," I thought, "at least I wouldn't have needed to rush." 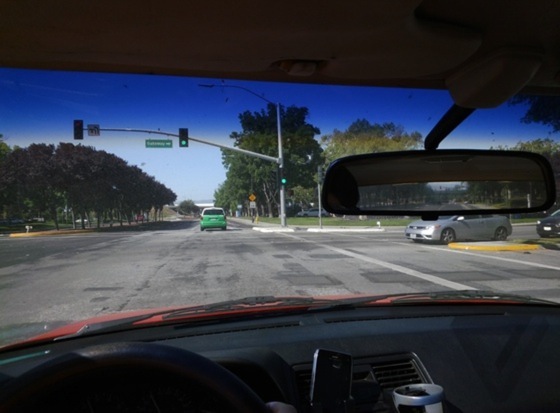 Don’t get me wrong: when I’m in the driver’s seat, Google Glass is exactly the kind of tool I want. I’m looking for a hands-free device that can show and tell me things that I need to know, before I reach my destination.

What the $1,500 Explorer Edition currently provides, though, is far too little information that relies far too heavily on my phone for even the little it does have to offer. With an integrated cell modem and more thought into how to make things I need accessible on that tiny screen, there’s loads of potential.