Can new OpenStreetMap editor use the crowd to beat Google Maps?

Can new OpenStreetMap editor use the crowd to beat Google Maps?

The online map wars have taken an interesting turn lately, with Google and its rivals Nokia and Apple all turning to their users to try and crowdsouce improvements in their main global map data. But a lesser-known, crowdsourced project called OpenStreetMap — sometimes referred to as the "Wikipedia of maps" because it is a map built entirely from volunteer contributors around the world, without a corporate overlord — is aiming to lure casual users into its fold, too. Today, it's launching a new editor "iD," which users voted to add as the default option for the website.

The iD editor represents the most dramatic facelift for OpenStreetMap since the project first started back in 2004. Imagine Wikipedia's complicated, esoteric interface for editors being overhauled to make editing articles as easy as posting something on Tumblr, and you'll have an idea of what the new iD editor is like for OpenStreetMap users.

"We want new users to be able to start mapping within minutes," said Eric Gundersen, CEO of MapBox, a DC-based startup company that took the lead in developing the new editor, working with OpenStreetMap contributors over a seven-month period. MapBox uses OpenStreetMap data for its own paid map products, including the maps it provides for Foursquare's website.

"We want new users to be able to start mapping within minutes."

Gundersen said that the new iD editor would also help improve the map quality for Foursquare and other major tech brands that have turned to OpenStreetMap data instead of Google Maps data in recent years — including Apple and Wikipedia itself. These companies have transitioned to OpenStreetMap data in part because it is completely free under an open database license, unlike Google Maps, which charges for heavy usage of its Maps API (25,000 loads or more). "We think you're going to see a lot more companies putting time into improving the core OpenStreetMap data," Gundersen said.

Unfortunately, right now, the new iD editor for OpenStreetMap is still not quite so easy as to eliminate the learning curve for complete newbies. Currently restricted to desktop Web view, the iD editor is definitely a vast improvement over the previous default editor for OpenStreetMap, which was intimidatingly technical. iD has an interactive guided tutorial, and it is about on par with the ease of Google Map Maker and Nokia's HERE Map Creator, but neither of those systems are all that intuitive, either. 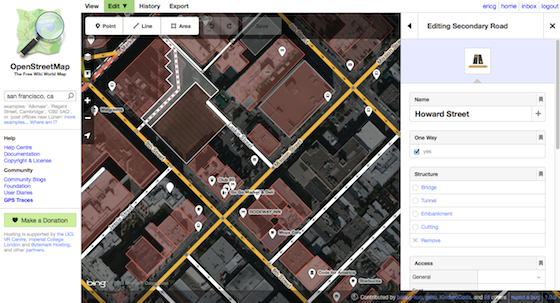 "We're going to get this on a tablet."

Still, MapBox promises improvements to iD for OpenStreetMap coming later this year, and Gundersen said his company was working on making iD work on mobile devices soon, too. "We're going to get this on a tablet, getting this on mobile devices is going to be huge," he told The Verge. MapBox first embarked on its quest to build the new editor in September 2012 with a $575,000 grant, and says that it still has some money leftover to continue further refinement of the product now that it's launched.

Update: The non-profit OpenStreetMap Foundation, which oversees the project, has also launched an online fundraiser seeking $40,000 in donations for new server hardware, which it says is necessary to keep up with its explosive user growth (over 1 million registered users as of late 2012). “Now, with the new editor and our plans for new hardware, we’re stepping up another level to make OpenStreetMap, not Google, the default choice for mapping and map data," said foundation chairman Simon Poole.