Internet traffic from Syria vanishes in the midst of ongoing conflict

Internet traffic from Syria vanishes in the midst of ongoing conflict

Google, Renesys, and others point to an internet blackout in Syria, the latest blow in an ongoing and increasingly bloody civil war. Analytics group Renesys confirmed about an hour ago that internet has apparently gone dark, something that was echoed in Google's real-time transparency report. OpenDNS' Umbrella Security Labs has also corroborated this. The apparent outage comes days after the Israeli military conducted airstrikes near Syria's capital, apparently destroying a scientific research facility. Not long before, reports also began circulating of "massacres" in the towns of Bayda and Baniyas: activists have said that militias fighting in support of President al-Assad killed dozens or even hundreds over two days, and gruesome photos and videos appear to show the bodies of children.

So far, there has been no official word on what prompted the cutoffs, or when communications might come back online. Syrian internet was also disconnected late last year, when it remained offline for two days before being restored. The graph below shows Google's version of the dropoff, which appears to have occurred around 6:45pm GMT or 2:45 EDT. Russia and the US, meanwhile, are attempting to help broker peace in Syria, while intelligence officials investigate the possible use of sarin gas and other chemical weapons by the Syrian regime or rebel forces. 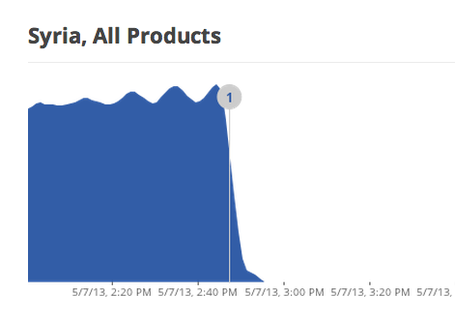 Update: Google has also confirmed the outage, suggesting the Speak2Tweet service as a method of mass communication for people who may still have working cellphones or landlines. Speak2Tweet, found here, provides international phone numbers that allow people to post a voice message as a Twitter link.