Under the influence: Bing lifts Klout to the top of search results

Under the influence: Bing lifts Klout to the top of search results

Is your social status too low to score a free pass to American Airlines' Admiral's Club? Social ranking company Klout is offering a new way to boost your score: sharing opinions on the subjects in which you already have some influence, and using the data to help answer questions on Bing.

In an expanded partnership with Microsoft, Klout will bring answers from its new "experts" service to the top of Bing search results. The integration, which builds on a partnership that began last year when Microsoft invested in Klout, brings crowdsourced answers to queries that search engines have long struggled to answer. And it points to growing ambition for the much-maligned Klout, which is expanding its network of "influencers" beyond those with a hyperactive social-media presence to include experts who spend more time offline.

Can the company that counts @horse_ebooks as an influencer produce real "experts"?

The question is whether enough Bing users will find value in Klout's purported "expertise" to steal market share from Google, which commands two-thirds of the search market. Bing's push into "social search" is a year old, and it hasn't helped to steal much market share from the leader. Despite Klout's new investment in the question-and-answer market, it remains unclear whether the startup can move from its roots in counting favorites and retweets on Twitter into a content-focused company that provides high-quality answers to a search engine.

Klout's latest effort to capture users' influence began a few months ago, when a small subset of users logging into Klout began seeing questions waiting for them in their activity feed. If you could only travel to one music festival, which would it be and why? What’s the best camera? Which mascara do you recommend? Those who choose to answer get 300 characters to respond — enough to provide basic advice, along with perhaps a link to a longer answer somewhere else on the web. The answers will appear in users’ activity feeds on Klout, and answers that are voted up by other users will float to the top of Bing search results.

"If you can get someone to create content specifically with search in mind, you can get these very powerful dynamics."

"When we think about our core mission of helping people fully to realize their influence — not just understanding it, from a score perspective, but actually having the impact they want to have — we weren't quite where wanted to be," said Joe Fernandez, Klout’s cofounder and CEO. "So we were running a bunch of experiments, and started playing with this notion of Klout experts." Intrigued with early results, Klout took the idea to Microsoft, and the companies began working together to bring "experts" to Bing. The idea is to make an end run around the search-engine optimization techniques that often allow advertisers to hijack results pages for popular, product-centered questions; Microsoft supplied the questions to Klout based on logs of queries for which Bing provided subpar results.

Microsoft, which has been more aggressive than its peers in integrating social networks into search results, hopes Klout users will contribute meaningful answers to difficult questions. Last year Bing introduced a "social sidebar" that attempts to pull in relevant results from Facebook friends who have posted about topics similar to the one you are searching for. It also suggests "people who may know" the answer to your question from LinkedIn, Quora, Foursquare, and Google+, among others. "What we've found is that when you take an existing corpus of social data and you add it on to search results, then you can get very delightful moments," said Lawrence Ripsher, who manages user experience at Bing. "And if you can get someone to create content specifically with search in mind, you can get these very powerful dynamics."

Microsoft believes that content is so powerful that is almost doesn't matter whether Klout's "experts" actually have any real expertise. If enough Klout users vote up an answer, it will still likely be a worthwhile addition to Bing results, Ripsher said.

But whether the new integration works at scale depends both on how willing Klout users are to answer questions, and how helpful Bing users find them. For its part, Klout says users who write good answers will see their Klout scores rise. And Microsoft says early results show that Bing users find the Klout content helpful. 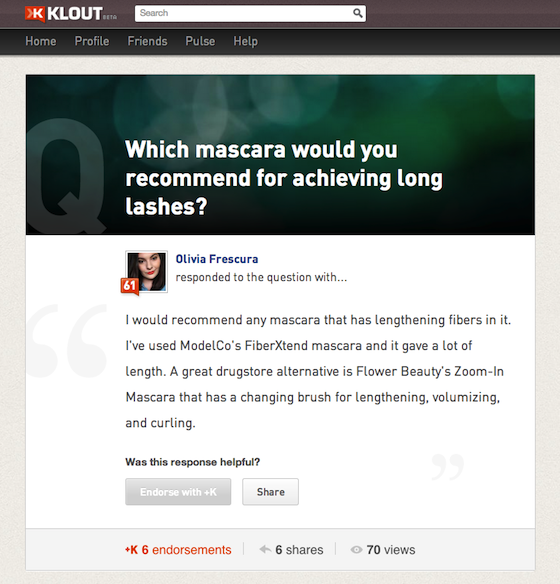 It’s unclear how readily Klout users will contribute to a website that has so far offered little more than a fluctuating score that can be traded for gift cards. At launch there will be no easy way to browse answers inside Klout; they will be visible only on users’ profile pages and in their activity streams. ("Over time we’ll be introducing a more consumption-oriented experience," Fernandez said.) User-generated Q&A is hard to master or to monetize, as everyone from Yahoo Answers to Quora can attest.

Fernandez said Klout's scoring mechanisms are transparent, and that all the major factors that go into a score are listed on its website. Yet questions have persisted: the service once scored wildly popular spambot Twitter account @horse_ebooks higher than Twitter cofounder Jack Dorsey.

But Klout, which has scored more than 100 million people and has "millions" of users, is used to being underestimated. While it may still be a punchline in the social media world, and draws scorn from people who balk at the idea of seeing a social media score next to their names, the 70-person company is quietly becoming a real business. Revenue is in the "double-digit millions," Fernandez says, and more than 200,000 businesses are using the service to target influential people.

"It's definitely been a journey from innovator, to hated on, to…" Fernandez trails off, perhaps uncertain as to where Klout now stands. Still, he says, "I feel like the tone has shifted to neutral. It was pretty rough for a little while. And we really had to go heads down, and execute out of it and evolve. We're doing something that’s pretty crazy. It's hard — taking what people do, both in the real world and online, and try to put a score on it and apply it at scale in the world. And we're just really early in that process."