The illusion of simplicity: photographer Peter Belanger on shooting for Apple

Share All sharing options for: The illusion of simplicity: photographer Peter Belanger on shooting for Apple

You’ve almost certainly never heard of Peter Belanger, but you’ve definitely seen his photographs. In fact, you may even see his work every day, and it’s likely that you own some of his most famous subjects. Belanger is the man behind some of Apple’s most iconic product images, a San Francisco-based product photographer at the top of his field. Apple is but one of his clients — he’s done work for everyone from eBay and Nike to Pixar and Square — and we sat down with Peter to talk about his work, his background, and some very, very expensive gear.

Where are you right now?

I just put the kids to bed and I’m waiting for Mad Men to download from iTunes.

Your portfolio shows your focus (and prowess) as a product and advertising photographer. How did you find your way to that specialty?

"I could actually make a living doing what I loved."

While studying photography I was in a program that really pushed the creative side of the industry (concept and meaning more than technique). The goal was to hang in a museum. At one point I decided I wanted to learn a bit more about the commercial side of photography and applied for an internship in San Francisco. I could see there was a lot of work in the area for commercial photographers due to all the product companies around Silicon Valley. This was when desktop publishing and computers were just taking off. I liked the aspect of working with clients and solving puzzling challenges with each job. I also liked that it seemed I could actually make a living doing what I loved.

What artists inform your work or inspire you the most?

There isn’t any one source that stands out, but I do like looking at current magazines to see creative images and new styles. I often find influences in images that might be a completely different style than mine, but have great lighting or a unique set. Movies and television shows are also strong influences. 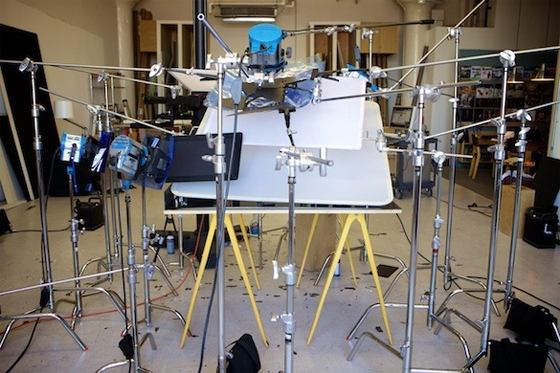 The technical details behind your photographs seem to vacillate between deceptively simple and incredibly complex. Sometimes it’s tough to see the product from outside of the lighting rig. Can you describe in general how you plan and execute a shoot?

The biggest factor is how many photos need to be accomplished in a day. I try to keep the shot list reasonable so there’s time for me to light each product uniquely. Ideally, I consider the material of the product and how best to light it. Sometimes it’s easier to light the materials without a surface getting in the way (since it can be added later). When I’ve had ridiculously complex sets around a product it is a result of needing to light something very precisely and be able to control each highlight and shadow independently.

If I’m not given much time or the product isn’t very cooperative I have to simplify my lighting. On one job I was shooting expensive leather shoes with actual snakes crawling out of them at the Academy of Science. I decided to use very forgiving light on that project because the snakes were moving and doing their own thing and I only had a small window of time for each shot.

What camera is nearest to you at the moment?

Canon 5D Mark III, this is my go-to camera. My base lens is the 24-70mm; if I could only have one lens this would be it. It works in almost all situations. I’m always impressed with how shallow the depth-of-field looks at f/2.8 with this lens.

You’ve created images seen by millions of people every day, but most people probably have no idea that you’re the photographer with whom they’re so familiar. I see your images every day walking around New York City. How did you come to work with Apple so much?

When I was starting out I freelanced for agencies that had Apple accounts. Over the years the agencies evolved and many of the designers and producers moved internally at Apple. Because I had a working relationship with lots of them, they kept using me. I feel very lucky that this relationship continued.

Can you describe the creative process behind an Apple product shoot?

"I think of my lights as layers that I can adjust individually to get the desired results."

The team at Apple always has a really well developed shot list and sketches of what they need. I work with their talented art directors to translate those sketches into photos. We start by getting the position of the product and then move forward on lighting. Because Apple products have such carefully selected materials it is incredibly important to light the product in a way that will showcase the various materials accurately. I pick an area to start with and think about how that material needs to be described. Once that section is done I move on to the next. This is how my sets get so complicated! I need to have control over each and every surface so when the client asks for a highlight to be elongated, I can do that. It’s similar to working on a file in Photoshop: you don’t do all your work on one layer. I think of my lights as layers that I can adjust individually to get the desired results.

When you create images, how do you balance working in the camera, versus post-production?

I try to do as much in camera as possible. Even shots that are achieved in camera need some post production. This is because no matter how well a product is made, when you magnify it at 100 percent, you see more than the human eye can see. Something that looks smooth as you hold it will have scratches, chips and other imperfections once magnified. However, there are times when I shoot in what I like to call "Frankenstein photography." I shoot various parts and combine everything later in Photoshop. This technique is great when I want to avoid reality (like my donut series) or when I can achieve something that couldn’t have been done in-camera. I did an album cover for The Brokenmusicbox this past year where the image was crafted out of various pieces to achieve a combination of elements and lighting that wouldn’t have happened any other way.

What do you photograph for fun?

"I'm the dad that shows up to baseball games with a 400mm lens."

My kids! I know that sounds boring but it’s not. I’ve been taking a photograph of them every day since they were born. This is a great outlet for me because it’s very different than my normal work. It’s something I can do and not worry what a client or anyone else thinks. Without that pressure I can take risks and experiment. I’m the dad that shows up to baseball games with a 400mm lens. I can hear my kids say to their friends, "It’s just what my dad does — ignore him." At the end of each year I make a photo book with 365 photos for the kids to see. I just finished book ten. It even landed me a job photographing my family for some Apple marketing materials. 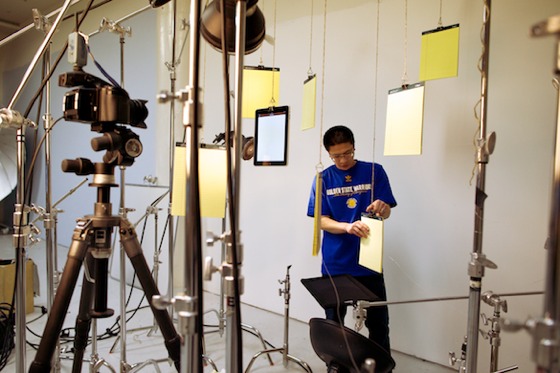 If you could watch any other photographer work, who would it be?

It would be cool to spend time on a shoot with Anton Corbijn. I’ve been a fan of his work for a long time, especially since he’s worked with so many musicians that I have listened to forever — like Depeche Mode and U2. He has a much more documentary-like style and different clientele than I do. His images have a strong style and while they may seem simple they also have a story within.

What tools and apps do you use to work every day?

For software I use Aperture for Canon Raw conversion and to archive camera files, Capture One for Phase One Raw conversion, and Photoshop. xScope is a small but very useful app. Evernote and Dropbox help keep my office paperless and organized, Blinkbid for estimating and invoicing. I try to keep up to date with my photo gear. Up until last year I only used Profoto lights. I wanted to expand my lighting so I added some Broncolor lights. In the studio I shoot with a Phase One digital back with a Sinar X view camera, and Phase One 645 camera system. Outside the studio or doing handheld work I use a Canon 5D Mark III.

"I love figuring out how to photograph something rather than being shown what someone wants."

True Romance is one of my favorites. There is an intensity of passion. It showed the extent people will go for those they love, blurred the lines between right and wrong, and had some great lines as well. I wanted to name our first child Alabama after the main character, but my wife vetoed it.

What or who is your dream subject?

Products that aren’t out yet and haven’t been defined by millions of photos. I love figuring out how to photograph something rather than being shown what someone wants.