Popular OS X image editor Pixelmator is releasing a major update on Thursday, codenamed Blueberry, and if you like working with vector shapes, it might just make your day. New tools for working with text as vectors, a new Shapes palette, and the ability to reconfigure your workspace for vector-first input are the big additions this time around. On the other hand, if you tend to focus on photo editing, there's a flexible new effect that imitates the light leak found in cheap film cameras, and a new tool called Paint Selection (a toned-down version of Photoshop’s Quick Selection) makes it easier to select certain parts of your images. Long story short, there’s a lot of new stuff packed in here, and the download is free if you already own Pixelmator 2. 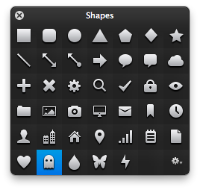 The core of the app's UI is basically unchanged from last year’s 2.1 update — floating palettes mix with controls placed directly on the canvas, inspired by the HUD style found in Adobe Photoshop. The big change is a new Shapes palette (pictured above) that lets you drag out several dozen different vector designs like arrows and clouds, the inverted teardrop flag found in Google Maps, and the ubiquitous toothed gear icon. You can also use the new palette to save shapes that you create with Pixelmator’s vector tools or import other shapes, if you can find some. Right now, Pixelmator isn't compatible with popular vector formats like .ai or .svg, but you can export the shapes you’ve created, first saving them to the custom shapes palette, and then dragging them to the desktop. An "Export Shape" menu item somewhere would be useful, but things work well enough once you know what you’re doing.

The other big UI change is the Tools palette, which can now be limited purely to vector tools (the company calls it "Vectormator"), pictured left. The new layout can be triggered by pressing Shift+⌘+V, and while it doesn’t give you any new tools, it does expose the other shapes that are typically hidden under the rectangle (e.g., circle, rounded rect, etc.), as well as pop up that new Shapes palette and an updated Shape Styles palette. (Stroke styles, gradient fills, and inner shadows for creating shapes that look "scooped out" have been added to the latter.) Given the number of different palettes available in Pixelmator, I like the idea of using a hot key to switch between workspace layouts, but the vectors-only Tools palette is a little redundant given the amount of duplication with Shapes below it. Letting people save their own Tools palettes (currently customizable through settings) and workspace layouts might have been a little more practical, but Vectormator is a start.

My favorite new feature is Text to Shape (pictured below), which lets you adjust the scaling, positioning, and vector paths of the individual letters in a word or block of text. After double clicking on a letter to edit it, you can lock multiple Bezier anchor points by ⌘+clicking on them, turning them from orange to white. This is great if, say, you want to make the descender on a lowercase Y longer without changing how the serif looks. It's a big advantage over the approach in competitor Acorn, which is a capable vector editor and lets you play freely with the paths created by your text, but doesn’t let you move letters individually, or let you lock points within a vector shape.

Pixelmator is probably best known for the supplied effects you can use to spice up your images, and this time around we get a new one called Light Leak, pictured below. It mimics the flare you get when a hole in your camera lets stray light onto your film. It’s a fun addition, and the different patterns and sliders give you a lot of leeway to play around. 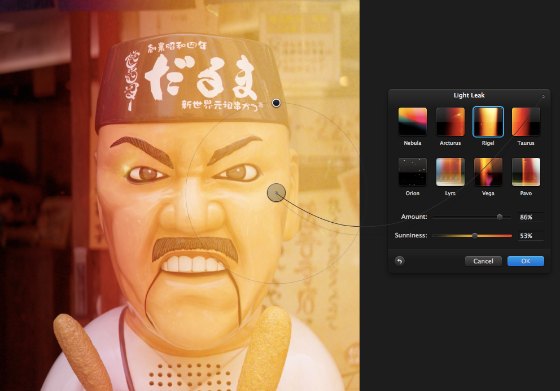 Lastly, the new Paint Selection tool lets you use a brush to make quick selections of areas that are similar in color, pretty much exactly like the Quick Selection tool in Adobe Photoshop. Pixelmator predictably falls behind its professional competition in performance — it’s much more prone to grabbing big chunks of the image that you didn’t want to select, and lacks Photoshop’s Tolerance setting, which lets you choose how "grabby" the tool is. Also, Photoshop feels miles faster on my MacBook Air's 1.7GHz Core i5, which is probably what you'd expect from a pro tool that's been refined over many years. But despite all the nitpicking, Paint Selection is still a nice thing to have, particularly when coupled with other tools like Quick Mask for refining the selections you make.

The new vector tools are powerful and fun to use

Pixelmator claims that there are over 100 new features in version 2.2, and while I can’t say I noticed any more than the headline features I mentioned above, there is a lot of new stuff to like here. The new vector tools — especially the great implementation of Text to Shape — are powerful and a lot of fun to use. And while there might not be a lot of new features for editing photos, Light Leak and the Paint Select tool are great additions.

Pixelmator does a lot of things really well, but it isn't Photoshop

Just like its competition, the newest version of Pixelmator does a lot of things well, but it isn't Photoshop. If you need to process lots of images quickly, you’ll immediately notice its lack of scripting support, its UI can sometimes be demanding (e.g., there’s no way to quickly scrub numerical values), and the fact that its effects are destructive makes it hard to combine several of them at once since you’ll have to undo to tweak anything. But at $14.99, Pixelmator 2.2 is currently half the price of the excellent Acorn 4 (one quarter the price after Acorn’s May promotion), and only a fraction of Adobe’s $99.99 Photoshop Elements. Even though alternatives might be better suited to the heavy lifting of day-to-day image processing, at that price, the creative tools in Pixelmator 2.2 make it worth a spot on anyone’s editing toolbelt.