Virtual robots in space: 'Rawbots' lets you build the Wall-E of your dreams

Share All sharing options for: Virtual robots in space: 'Rawbots' lets you build the Wall-E of your dreams

From soccer-playing robots to mechanical creatures inspired by sea turtles, there are some amazing things that can be done in the field of robotics. But the complexity of these machines means that building a robot isn't really possible for the average person. With Rawbots, developer Alex Rozgo and his team are looking to remedy that by allowing players to easily create complex robots inside of a video game. Available now as a $30 alpha with a full release slated for the end of the year, the game lets you both build and program your own machines using a simplified building block system that works a lot like Lego's Mindstorms line. "We strongly believe that small building blocks are intuitive, easy to learn, and can create beautiful emergent complexity," Rozgo tells The Verge.

Creating your robot involves two steps. First there's the crafting phase, which involves building it: you can connect various body parts, sensors, motors, and tools, snapping them together in different ways to create wildly different machines. Once that's done, you'll use a visual programming tool to determine your creation's behavior. You can then let your robot loose in an open world where you're encouraged to experiment. "Learning how to design, build, and program your 'bots is at the core of the experience we want to deliver with Rawbots," says Rozgo, "as much as playing with finished designs."

Much like the robots themselves, the universe you're given to play in can be altered in multiple ways. "Each universe has a set of default rules that can be re-programmed," reads the game's description, "like gravity, day / night cycles, planets, atmosphere, and landscape." According to the developers, this customizable and open nature means that not only can you create a wide range of cool robots, but also different ways to play — you can tweak the world to build a first-person shooter if you want, or a strategy game. Or maybe you'd just prefer to set up a robot fighting league with other players. Robots will be able to drive, swim, and even traverse space to reach other planets, providing a good range of possibilities.

"The combinatorial explosion of possibilities is an exercise we leave to the player."

It's an ambitious-sounding project for a team of just eight. Rawbots has been in the works for around a year, and the team does have some solid industry experience: Rozgo was a former senior gameplay engineer at the now-defunct LucasArts, where he met Rawbots software engineer Neil Haran. With a big game and a small team, the studio is being careful to build Rawbots in a way that plays to its strengths. "We manage complexity by carefully designing simple axiomatic building blocks," explains Rozgo. "We just need to deliver no more than 30 stable, core, fundamental bot parts, that are rigorously tested to do one job and do it correctly. The combinatorial explosion of possibilities is an exercise we leave to the player." 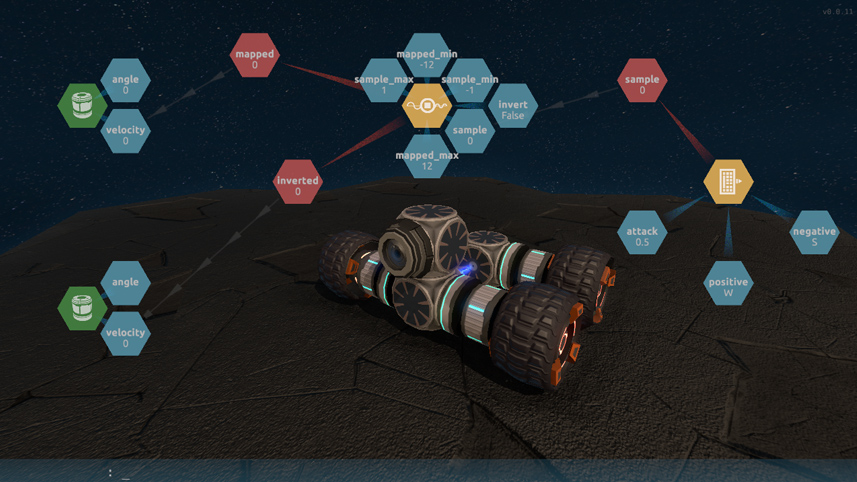 "The community has built better bots than any of us in the office."

And already players have created some very cool things. The early alpha build of the game has seen everything from motorcycles to two-legged mech warriors. "The community has built better bots than any of us in the office," admits Rozgo. "We never managed to get a spider or biped working." Unfortunately, while Rawbots took the Minecraft approach to releasing the game — selling early access to the alpha to fund further development — it hasn't caught on in quite the same way as Mojang's juggernaut. Rozgo say that sales have been enough to give the team "the confidence that we are doing something right," but it seems that it's not enough to fully fund development — at the beginning of the month Rozgo launched a $300,000 Kickstarter campaign in an attempt to get Rawbots across the finish line.

An obvious fit for PCs (the game is coming to Mac, Windows, and Linux), Rawbots is also in the works for the Wii U, with a PlayStation 4 version also possible if the crowdfunding campaign manages to rack up more than $440,000. Other stretch goals include a mobile app for iOS and Android that lets you build robots on the go, as well as a 3D printing option so that you can turn your creations into real-world toys. As of now it seems like a tall order — so far the Rawbots campaign has raised just $12,000, far short of its funding goal. But a failed Kickstarter campaign won't be the end of the project.

"We will keep sailing, as we've done for the past year," says Rozgo. And the end goal is nothing if not ambitious. "We wanted to bring the awe of discovery back to gaming."