High above the Earth, astronauts aboard the International Space Station are playing with fire — very carefully. By lighting controlled fires and watching them burn, the Expedition 35 team is learning how to prevent accidental blazes from breaking out aboard the station and other spacecraft — a nightmare scenario that could put not only lives, but the very future of human spaceflight at risk. "We can certainly make things not flammable on Earth, but in space, that changes," said Dr. Paul Ferkul, a NASA scientist whose experiment recently found that a fire-resistant fabric similar to astronaut clothing actually ignites in space.

Concerns about accidental fire in space are valid, given that in 1997, a malfunction aboard the Russian Mir space station ignited a small blaze so hot it melted parts of the metal interior. Though quickly extinguished by US and Russian astronauts, the incident raised concerns at NASA about the future of space fire safety. There has never been an accidental fire aboard the International Space Station. But that said, it’s been clear since the onset of human spaceflight during the Cold War that the unique, low-gravity environment of Earth’s orbit has strange effects on fire and firefighting efforts. NASA began earnest space fire research in the 1980s, as the Space Shuttle program took off, and work has been going on aboard the International Space Station since 2002, when a special insulated laboratory called the Microgravity Science Glovebox was brought aboard. 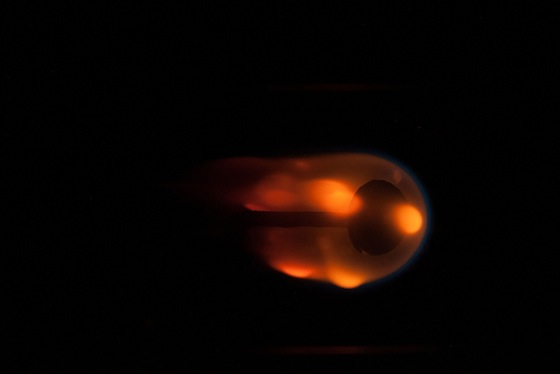 In order to make sure nothing like the Mir incident or worse happens aboard the ISS, dozens of researchers around the world are using the glovebox and other equipment to understand how fire, flammable materials, and extinguishers behave differently in space than they do on Earth. "Each time we do an experiment, we look at how flames form and how fire might propagate in microgravity," said Tracy McMahan, a spokesperson for NASA’s Marshall Space Flight Center.

It’s now known that fire in space burns at lower temperatures and more slowly, and that fire extinguishers relying on pressurized liquids can actually cause fires to spread and grow. But to this day, many fundamental questions remain. "If something is marginally flammable on Earth, is it more dangerous or less dangerous in space?" Ferkul asked.

As it turns out, his research may have just answered that question for a fabric containing one common clothing material: cotton. In a paper being presented at a conference later this month, Ferkul and his collaborators found that a certain blend of cotton-fiberglass fabric designed to be flame-retardant on Earth actually burned in space when exposed to a stream of air meant to extinguish it. Although this specific blend of cotton-fiberglass isn’t used on the station itself, "there are many materials up there like this," Ferkul noted, "including some astronaut clothing fabric, and there’s no reason why [the results] wouldn’t apply to other materials that are similar." 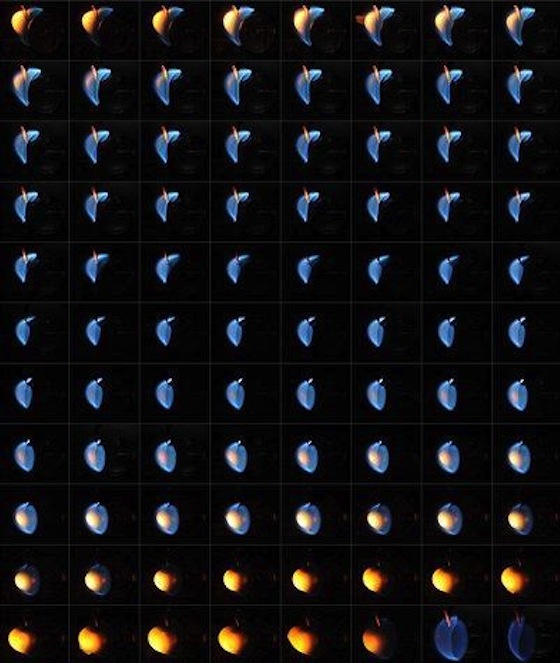 Still frames of an acrylic sphere burning as part of an experiment aboard the International Space Station. Shooting nitrogen at the flame temporarily dampens it, but then once the flow is stopped, the flame grows (Credit: NASA/BASS).

Ferkul and colleagues tweaked the test fabric composition, increasing cotton content relative to the fiberglass to make the fabric slightly flammable on Earth. The goal was to compare the differences in burn potential on the ground and in space. On Earth, it was only able to burn in the direction of air flowing into the fire. But in space, it was able to burn both in the direction of the air flow and against it. That’s because of the buoyancy of air itself: hot air on Earth rises, drawing cooling air into a lit fire and regulating its size and speed. But in space, there is no buoyancy, so "if you get just enough oxygen to the flame, the flame is able to spread happily," Ferkul explained.

"This type of situation could occur."

Although Ferkul’s experiment was contained in entirely within the shielding of the Microgravity Science Glovebox laboratory on the ISS, he noted that the results could be applied to the rest of the station. "This type of situation could occur in some manner if there was an accident up there," he said. Specifically, Ferkul noted that the air flow circulation system aboard the station, which relies on fans, could blow oxygen into this type of fire, allowing it to spread. 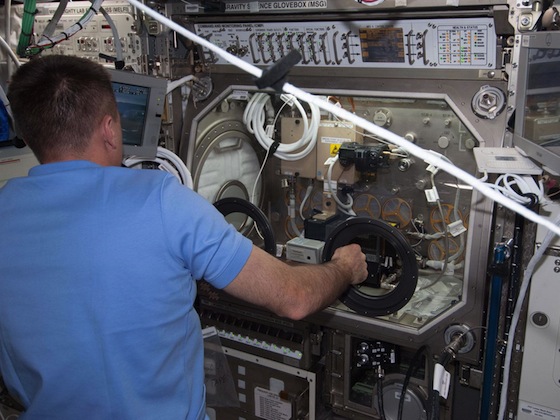 Ferkul’s current round of experiments aboard the station are due to conclude soon, but a follow-up experiment is planned for March 2014. In the meantime, several other fire and combustion experiments will be taking place in the same test glovebox. "This is getting pretty widespread attention," Ferkul said of the issue of space fire safety. In fact, research has gained new urgency as commercial companies such as SpaceX and Virgin Galactic look to launch humans into orbit in the near future.

As for his results, Ferkul said that NASA is unlikely to move to develop a new fabric for astronauts to wear on the station anytime soon. "The reality is that it is difficult to produce a fire-safe fabric as comfortable as cotton," he told The Verge. Still, he said they could be used to improve computer simulations of how flammable objects become in low gravity environments, as well as on Earth. "The fundamental knowledge gained can be applied to a wide variety of terrestrial combustion problems," he said.