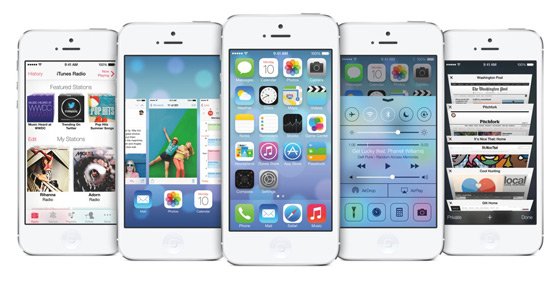 It used to be that every big Apple event would feature at least one head-scratching design decision, usually more. The original iPad shipped with a mobile operating system instead of a "full" desktop experience, the third-generation iPod touch didn't have a camera, and the MacBook Air didn't bother with an Ethernet port. The fact that all these products were runaway successes in spite of their apparently debilitating limitations speaks to Apple's track record of making unintuitive choices that pay off in the long run. Apple was the company of unconventional wisdom. Was.

Today's marathon WWDC keynote served up "the biggest change" to iOS since the original iPhone, and it's a change as much about the surface tweaks, polishes, and additions as it is about the underlying philosophy. Apple is now playing it safe. Everything we saw from Craig Federighi on that Moscone West stage felt sensible, logical, rational... in keeping with the times. For many, the iOS 7 visual overhaul will be a case of getting exactly what they asked for — less skeuomorphism, quick toggles of commonly-used settings, and a modern, minimalist look. But remember, Apple's success has never been about giving users what they think they want, the company's decade of dominance has grown out of making devices and software that prove themselves with long-term usability.

The stick-thin, shadow-deprived Helvetica font that pervades the new iOS interface is pretty, but it's less readable than the current look. Notifications Center and Game Center have lost their silly background textures, but neither looks manifestly more useful than what we already have. Would it be cynical to suggest that Apple's biggest change in iOS 7 is the application of a new UI skin, à la Android manufacturers? After all, we decry HTC and Samsung's efforts to introduce change for change's sake — how is Apple different when it spends time redesigning the cell signal indicator into a more abstract row of dots?

It gets worse the deeper you dig in. The Weather app is now animated with raindrops, snowflakes, and a lightning bolt that looks to have been lifted right out of HTC's Sense interface. The "today" section in the Notifications Center instantly reminds you of Google Now. The slide-up Control Center is a quick settings menu that's been present in Android skins since at least 2010. The visual multitasking cards evoke webOS, while the "swipe left to go back" gesture is pure BlackBerry 10. Yes, Apple's syncretic new OS even borrows from the company formerly known as RIM.

In moving to a flatter interface with more abstract iconography, Apple is also aping Microsoft's design direction with Windows Phone — the style once known as Metro. The problem with that approach, as Microsoft has learned when applying the same principles in Windows 8, is that the more of the user interface you eliminate, the less intuitive your software becomes to use. The skeuomorphic textures, reflections, and hints that litter the current iOS UI may appear juvenile and unfashionable, but there's no denying that at least some of them aid user comprehension of the UI paradigm.

Apple argues that there are "a thousand no's for every yes" (someone should really have said "no" to that apostrophe) in its design process, and maybe among the ideas turned down there were still nuggets of crazy, innovative design. But today, the company that once shook the world with a simple grid of cutesy icons delivered a visual redesign that — while pretty and ultra-modern — amounts to little more than a fresh skin on an old machine. What's worse, Apple has not only failed to truly innovative in its own right, the changes and additions it has introduced have all been done before. The once-leader is now playing catchup by picking and choosing what it considers the best aspects of its competition.

The iPhone became the best phone on the market thanks to a string of bold and counterintuitive decisions from its designers. Today's software changes may appear to have been enacted in the same vein, being undeniably broad and decisive, but they're also derivative and by the numbers. Whereas the Apple of yesteryear seemed to relish being unorthodox, the Apple of today is moving much more in line with mainstream trends. For better or, more likely, worse.