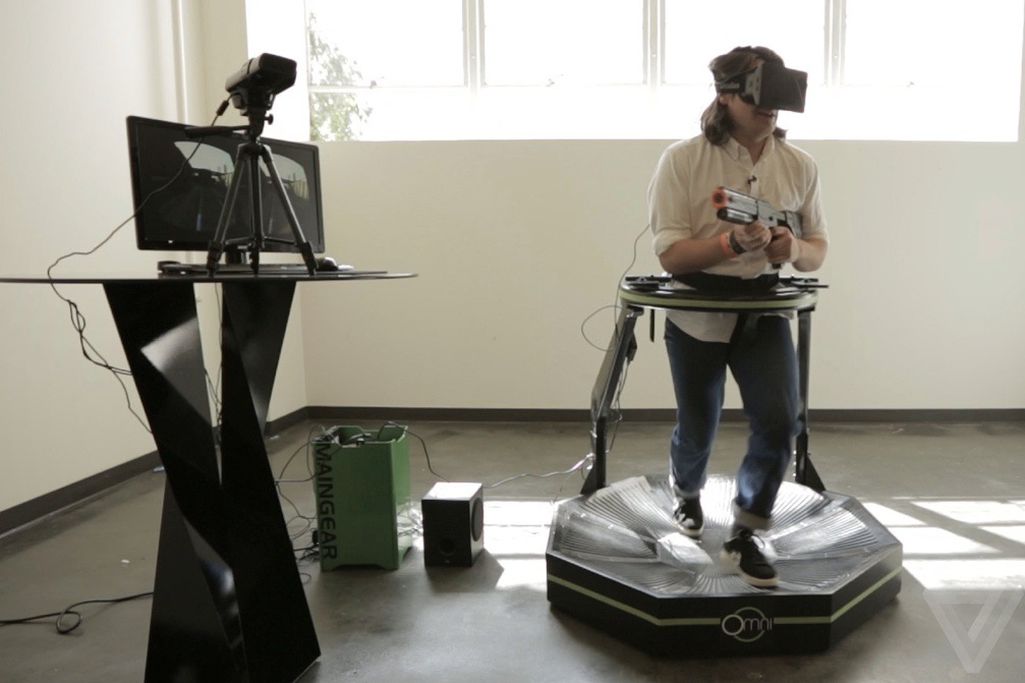 First you put on the shoes. They're Converse knockoffs, and you don't even like Converse to begin with, but you don't care because they're special shoes. There's a plastic plate on the bottom, which lets you skid across the floor like a bowler. You walk across the floor carefully to the harness. It's demeaning, with a strap that threads under your groin and gives you the full-on diaper feel / look. The harness has structure to it. It all means something. And then you swing open the hatch, and step onto the Virtuix Omni. Try not to slip.

The Omni's platform is like a grooved, friction-free, plastic crater. At waist level a ring that surrounds you, which makes you feel like you're commanding a starship, or about to be teleported somewhere. Using the harness, you rest your weight on the ring without falling through, which frees your feet to slide across the crater's surface. Can you let yourself go and start pretending to walk, or do you cling to your old concepts of locomotion and reality?

I’ve tried many attempts at VR locomotion, including a hamster cage and a bizarre contraption involving several bungie cords. Omni’s method is simpler. You walk in place on a solid object, and that motion is translated to in-game movement.

But right now, Omni isn’t Omni yet. It’s just a wooden prototype. The shipping product will have accelerometers and magnets in clip-ons for any shoe, which will track each step individually, in multiple directions. For now, Omni’s shoes and platform are "dumb," and instead a Kinect tracks your steps. All this hardware, all this technology, all this beautiful experimentation, results in one thing: you’re simulating the press of a "W" button to walk forward. If you swipe your feet speedily across the Omni surface, the Kinect software detects your flailing and holds the "shift" button in addition to the "W" button, and you can sprint across the game world. You can’t go backwards, you can’t turn, you can’t crouch… you’re basically just the world’s most convoluted "W" button. The Virtuix guys tested the setup by simply opening a Notepad and typing. 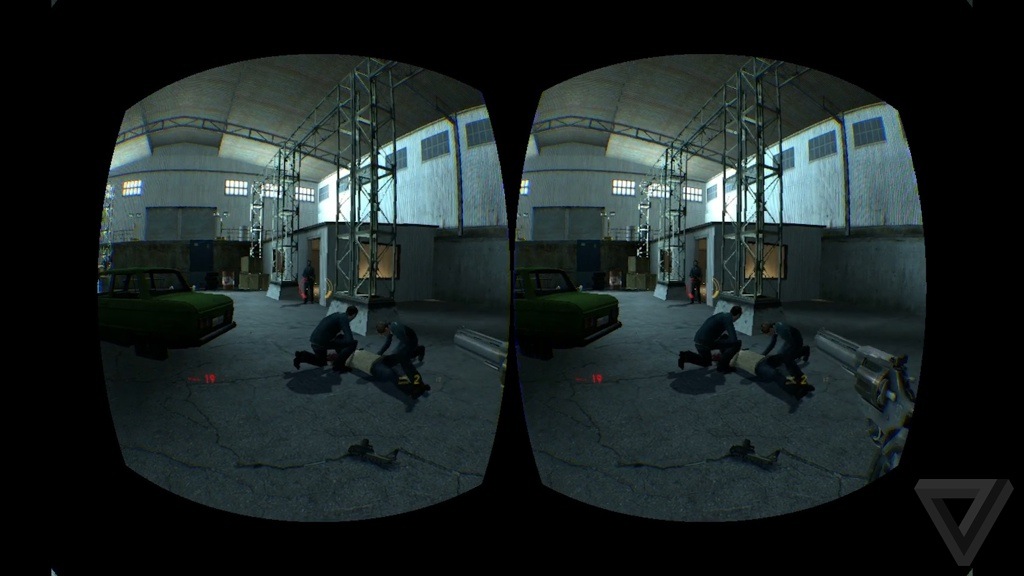 Omni’s current demo of choice is the Half-Life 2 beta that’s been configured to work with the Oculus VR goggles. When the level was loaded, I squinted through the low-res display and swung my head around to test its responsiveness. The motion of the plastic gun in my hand wasn’t reflected in the game world: the only way I could aim was by tilting my head. That frustrated me. And now I was locked in a cage, in a diaper, with no way to proceed in-game other than tricking a Kinect sensor into pressing the W key.

I was locked in a cage, in a diaper

But I quickly forgot about those Ws. Instead, I just started walking. This particular Omni was configured for someone shorter than me, so I had to slump down a bit for my diaper to get support from the ring. Sometimes I felt really stupid, like my legs were all wrong, but then my character would start to move, I would start to "get" it, and then the bad guys invaded and I shot them and they died. And then I got stuck on a corner, or out in the open, or hovering above a grenade, and I died.

Like many people, I’ve found the Oculus Rift is best experienced in slow, combat-free ways. It’s about exploration and discovery. Finally, you can stand and look at your surroundings with your natural head movements, fueled by your natural curiosity. But there was no time for any of that. The bad guys were coming, and I was on an Omni, and so I ran.

Even though Virtuix warned me it was a typical response, the first time a grenade was chucked at my feet I booked it. But I couldn’t run backwards, or sideways, so I didn’t get far away from the grenade before it detonated. The fear of a grenade at your feet is somehow primal. Because you can’t see your body while using the Oculus, but you’re using your body because of the Omni, it’s like you’re floating in a murky lake. Then you’re gripped with the sudden fear that Something's In the Water, and it’s probably a piranha. 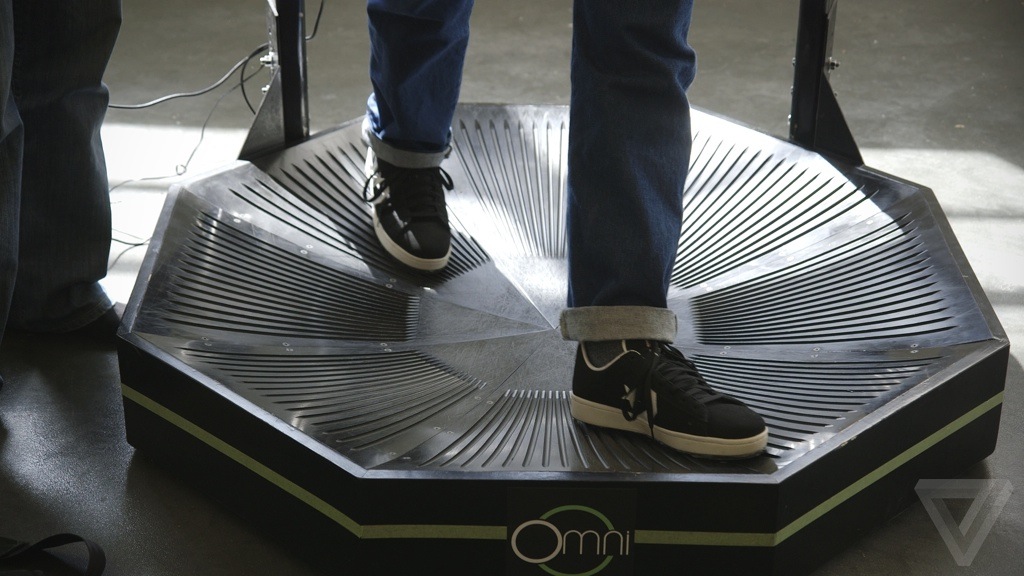 I constantly got hung up on sharp corners. I’d bump into an object and get stuck, unable to sidestep it. It was explained to me later that the only method of turning my character was by turning my head with the Oculus. My walking had nothing to do with it. I mean, I knew that, but my body didn’t know that. In fact, I don’t know if my body could ever learn that. VR has a weird learning curve: the more it’s like real life, the more difficult it is to operate the aspects that aren’t.

The more it’s like real life, the more difficult it is to operate the aspects that aren’t

After a while, the Virtuix guys decided, because of my height, I should try to use the Omni without the harness. Despite the more natural posture it was much more difficult, as I braced myself with one hand and held my gun in the other. With so much concentration spent just trying to walk forward, I didn’t mind so much that my neck was the cursor. In fact, it was a bit of a relief.

The real test will be when Omni is in more than its current hacky incarnation. Virtuix hopes to ship the device in early 2014, and is currently gearing up its final design for manufacture. The device will be rapidly adjustable, collapsible, smaller, vastly more responsive (allowing the ability to turn, strafe, do analog speed control, and maybe even perform backwards locomotion), and surprisingly cheap: retail versions should go for somewhere between $499 and $599, and early Kickstarter backers will get one for much cheaper. Add in an Oculus Rift and a fake gun and you’re still probably under $1,000 for the whole setup. This is revolutionary for VR. It’ll be even more revolutionary if it really works; if it’s more than a W key.

At one point I spoke out loud about what was happening in the game, and received no response in the room, IRL. I spoke again, nothing. I felt like if nobody spoke the third time, I could be stuck forever in the game world. And then my buddy Trent yelled off to the right: "Save me! I’m over here!" I know Trent’s voice, I know he’s not a Half-Life character. I smiled. But I still ran toward him in the game. I could’ve sworn I’d find a ghost of him behind the tanker car. The worst part of virtual reality, and I had never considered this before that moment, might be being the only human in a 3D land.