For the first time since Apple opened the App Store in 2008, it’s explicitly opening up iOS to hardware game controllers, enabling console-like gaming experiences to be powered by its mobile devices. The implications are big: game developers will be able to target all controllers that conform to Apple's standard, removing a lot of the friction that has so far stopped add-on hardware controllers from gaining popularity.

We first learned that Apple was adding hardware controller support during Monday’s WWDC keynote presentation. A slide (pictured below) indicated that the iOS 7 SDK would support MFi game controllers, a reference to Apple’s licensing program for third-party hardware add-ons. By adding support for controllers directly into the SDK, Apple is sidestepping the biggest problem that has plagued third-party controller makers up to this point: the need for game developers to write software that specifically targets their hardware. Now, in iOS 7, Apple is providing some kind of consistent interface that all developers will be able to target. Write once, run everywhere. That is, as long as the hardware conforms to Apple’s standard. 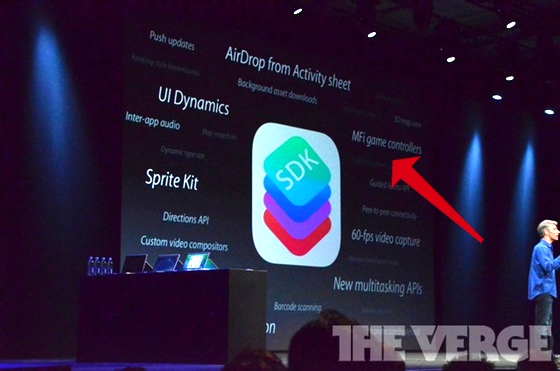 On that note, Touch Arcade has posted images from an Apple developer guide (pictured top) that reveal what the company has in mind. One style of controller exposes the screen of your device, while the second looks like a typical Bluetooth controller, coupling dual analog sticks with the other controller’s D-pad and face buttons.

Who is going to stop Apple from waltzing into the home console market?

And it's possible that Apple has bigger ambitions than just handhelds. The company first added AirPlay mirroring in iOS 5, letting anyone with a $99 Apple TV bring compatible mobile games to their living room screens. Now, with API-level support for third-party game controllers, who is going to stop Apple from waltzing into the home console market? Interested developers will simply have to implement support for AirPlay mirroring and hardware controllers to give players a console experience powered by Apple's mobile devices. And given Apple's dominance of handheld gaming and the fact that the new 16GB iPod Touch and Apple TV ring in at a combined $328, Sony and Microsoft could have more than just each other to worry about this generation.