Share All sharing options for: Dmitry Itskov wants to help you live forever by swapping your body for an android avatar

If Dmitry Itskov has his way, the human lifespan will soon no longer depend on the limitations of the human body. Itskov, a Russian tycoon and former media mogul, is the founder of the 2045 Project — a venture that seeks to replace flesh-and-blood bodies with robotic avatars, each one uploaded with the contents of a human brain. The goal: to extend human lives by hundreds or thousands of years, if not indefinitely.

Itskov’s wild ambitions have already attracted the attention of scientists at Harvard, MIT, and UC Berkeley, among other institutions, but he sees the venture as much more than a scientific one. Itskov’s overarching idea is to create something of a global utopia, one in which people, freed from the shackles of their corporeal selves, have ample time to pursue knowledge and spiritual growth. And he says he’s making slow progress toward that far-out ideal. In New York this week, Itskov plans to unveil a sophisticated robotic replica of his own head, designed by robotics pioneer David Hanson. The Verge caught up with Itskov to find out more about that creation, and his radical plans for the future of humanity.

Your second annual conference, the Global Future 2045 International Congress, will be held in New York this week. And we hear you’ll be unveiling a robotic head modeled after your own, designed by David Hanson. What inspired the decision to have that head constructed, and what do you hope it shows the general public when it’s introduced?

"My vision is to use the robot as a full-body prostheses for the human brain, to enable people to live longer."

Basically, I think that the idea of a head was the right one, because when you look at a human being, what causes the association? What makes you think that you are communicating with a human being? It’s about expressions, emotions, and the face as a whole. That’s why we’ve started with the face; because using the head of the robot, when it’s state-of-the-art like this, you can demonstrate to people that their future artificial bodies can be very realistic and look very humanlike.

I decided to work with David Hanson because he’s famous for having the most advanced technology available. There will be 36 motors in the head, which will work to create exceptional realism. Really, it will be an exceptional android. And actually, of course, we’re interested in creating a full android body, which could walk, jump — basically behave like a human body in the future. My vision is to use the robot as a full-body prostheses for the human brain, to enable people to live longer.

Since you started your 2045 project, you’ve met with prominent politicians, scientists, and even the Dalai Lama. Overall, how do you feel they’ve received your ideas about using technology — namely robotics — to promote longevity?

Many of the people I’ve met actually understand the necessity of the implementation of the kinds of technology I’m trying to promote. What has surprised me is that few of the people I’ve met have been ready to join the project publicly and openly. I don’t mean those people who are attending the Congress — they are with us, at least to some extent. But I mean those people who haven’t yet decided to present themselves publicly. I’ve met many more people than those speaking at the event: some politicians, spiritual figures, scientists even, who have supported the idea but are waiting for the right moment. They are quite prominent people, quite well-known names.

You’ve mentioned before that your lifestyle changed drastically when you launched the 2045 venture, back in 2011. Can you describe those changes?

I don’t like to talk much about that. But in general, I can tell you that my values in life have changed, my priorities have changed, and I have a new vector for personal development. One that isn’t so selfish and so self-centered. I used to be as selfish as anybody in this world, but since these internal changes have come into my life, I hope that I’ve become a little bit better than I was.

I can tell you that everything that has happened has been very sincere, very natural. I’m not playing, I’m not doing this to promote myself. For me being public is a kind of job. The project is associated with me, the ideas come through me, and I have to be public to promote this. I’m not doing it for my ego or to be a kind of superstar.

So let’s say you live forever — or at least much, much longer than the current human lifespan. What do you want to do with all that extra time?

"I want to see these amazing technologies transform the infrastructure of civilization."

You know, as for myself, I think I would use my personal time for spiritual self-improvement, for the spiritual practice that could allow me to expand my consciousness. To come closer to what people call “spiritual realization” — this is parallel to helping people, which is also one of my priorities. I think that helping people, being less selfish, thinking less about yourself, is something that is inseparable from spiritual growth.

But I want to be clear: My vision for humanity is not that I want everybody to be a kind of ascetic person. I also want to facilitate the creation of a new high-tech world. If you remember some of the best stories from sci-fi literature, that’s what I’m expecting. I want to see these amazing technologies transform the infrastructure of civilization. 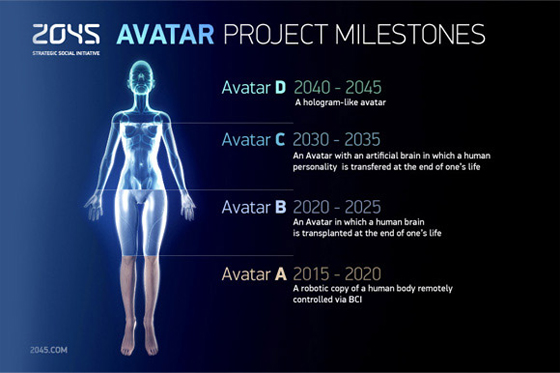 You take a lot of flak for promoting ideas that seem really far out. But when you talk to scientists, what do they tell you are the key challenges to making these ideas a reality?

If we want a general picture, I would name two big challenges: understanding the human brain, and understanding at least part of the nature of human consciousness. The second is obviously more challenging than the first.

Overall, I think these are the most exciting, and most difficult, challenges for science right now. Especially consciousness. If you understand what consciousness is, you basically understand what the universe is. We know that every person has a very unique perception of the world, because each brain creates this uniqueness. Basically, we have some data about the external world coming from our sensory organs, and the brain constructs a perception of the universe. Philosophically, everything is in your consciousness. Physically, every consciousness is kind of a unique one. If we can unravel that, then we can make the progress we need.